The Civilization series has repeatedly roped me in for disappearances that span hours and even days, and the newest instalment, Civilization: Beyond Earth continues that storied tradition. The civilization building and management simulation keeps a lot of what has worked about the series, and adds substantial new gameplay elements – this is no warmed-over expansion with some sci-fi facepaint, nor is it even just a sequel to the excellent Sid Meier’s Alpha Centauri. Instead, it’s a thoughtful extension of the Civilization series into a future era, with meaningful changes to mechanics that make sense in the context of the story.

As for that story, the premise is basically that Earth has collectively put together a large expeditionary force, drawn from the people of various nations, to seek out and colonize new worlds. The colonizers hail from a wide range of backgrounds, and instead of being divided by nation as they were in previous Civilization games, they’re sponsored by different organizations, and the goals of those organizations inform their faction traits.

Sponsors include Arc, which excels in covert operations; Brazilia, which offers 10% bonus to melee combat; Franco-Iberia, which has a tech focus; Kavithan Protectorate, which is good at expanding via colonization; Pan Asian Cooperative, which can quickly develop the land and build wonders; African Union, an agricultural powerhouse; Polystralia, which benefits from better trade; and Slavic Federation, which is strong in the newly added orbital layer element of the game. Players also go through a brief bonus selection when starting a new game, which will give them different landing conditions and first-turn bonuses when starting out. 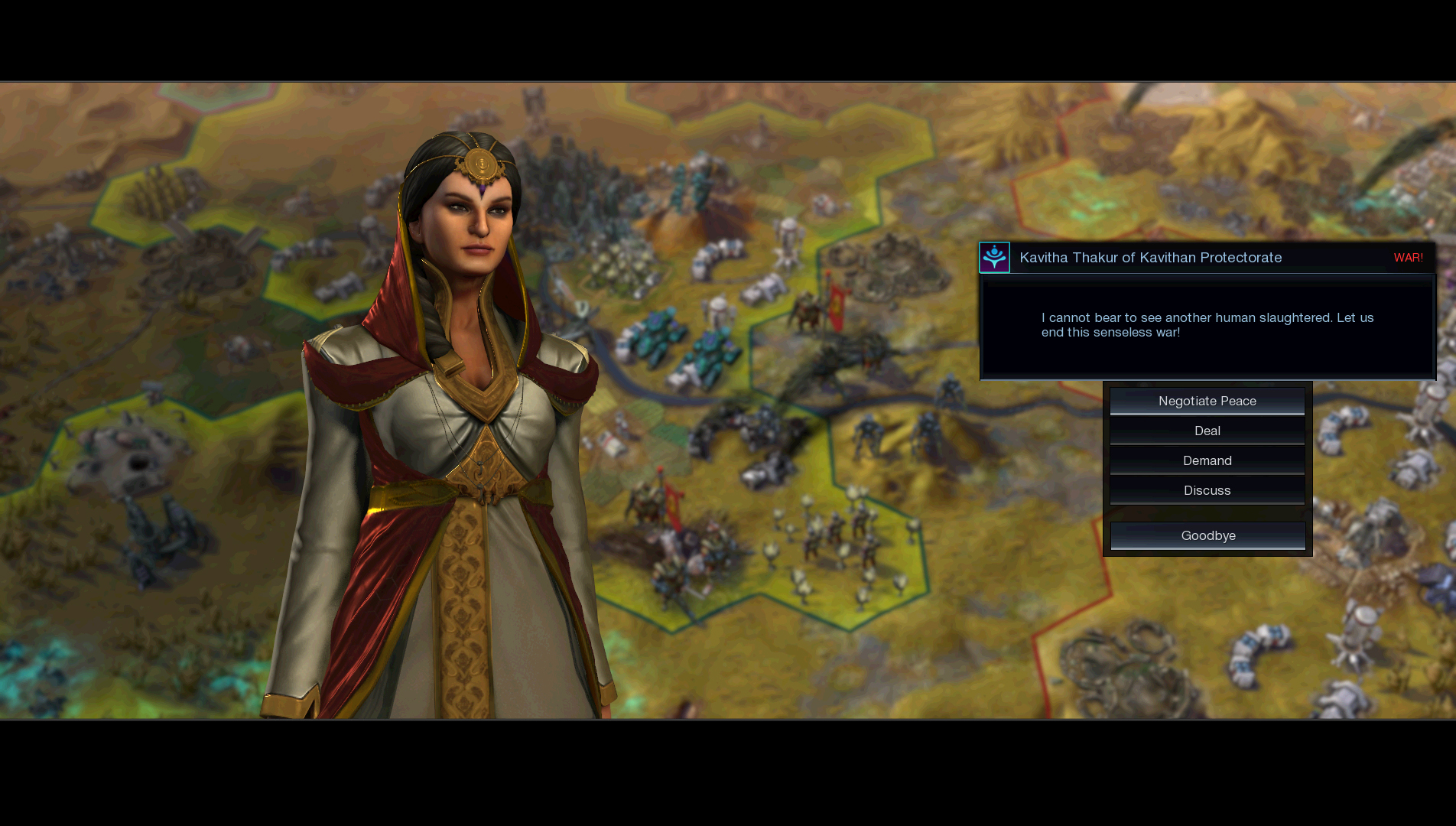 That orbital layer is a new map level, which exists above the surface terrain, where players can deploy satellites and units to give an area of tiles (and units within) specific gameplay bonuses, including faster healing, better resource collection, protection from the native planetary hazards and more. Orbital units have a timed life; just like real satellites, they work for a set number of cycles and then they burn up harmlessly in the atmosphere. It’s a rich additional feature, and one that’s required to excel in the advanced difficulties of the game, though I found playing on easier modes meant that if you weren’t altogether sure of how best to play the new mechanic when starting out, it wouldn’t appreciably hurt your experience.

Also new to the game are Affinities, and these are core to the Civilization: Beyond Earth experience. There are three Affinities in the game, and these represent a points system based on how you choose to steer your society’s technological development. Tech in Civilization: Beyond Earth isn’t completely linear; it’s a web, and you can make choices within that which favour a different approach to colonizing an alien world. Some techs, once researched, will unlock Affinity points, and gaining levels of a particular Affinity will influence the direction of your unit development.

Units in Civilization: Beyond Earth are different, too – you don’t simply research each new unit type, but instead select upgrades to a few basic classes of units (land, air and sea armed combatants mostly) based on your Affinity progression. All existing units are automatically updated, solving one of the major headaches of past Civilization unit evolution, and the changes don’t cost anything. This makes the Affinity system crucial to gaining a military upper hand, as you can focus your tech research to speed up your progress through the system’s levels and gain upgrades more quickly. 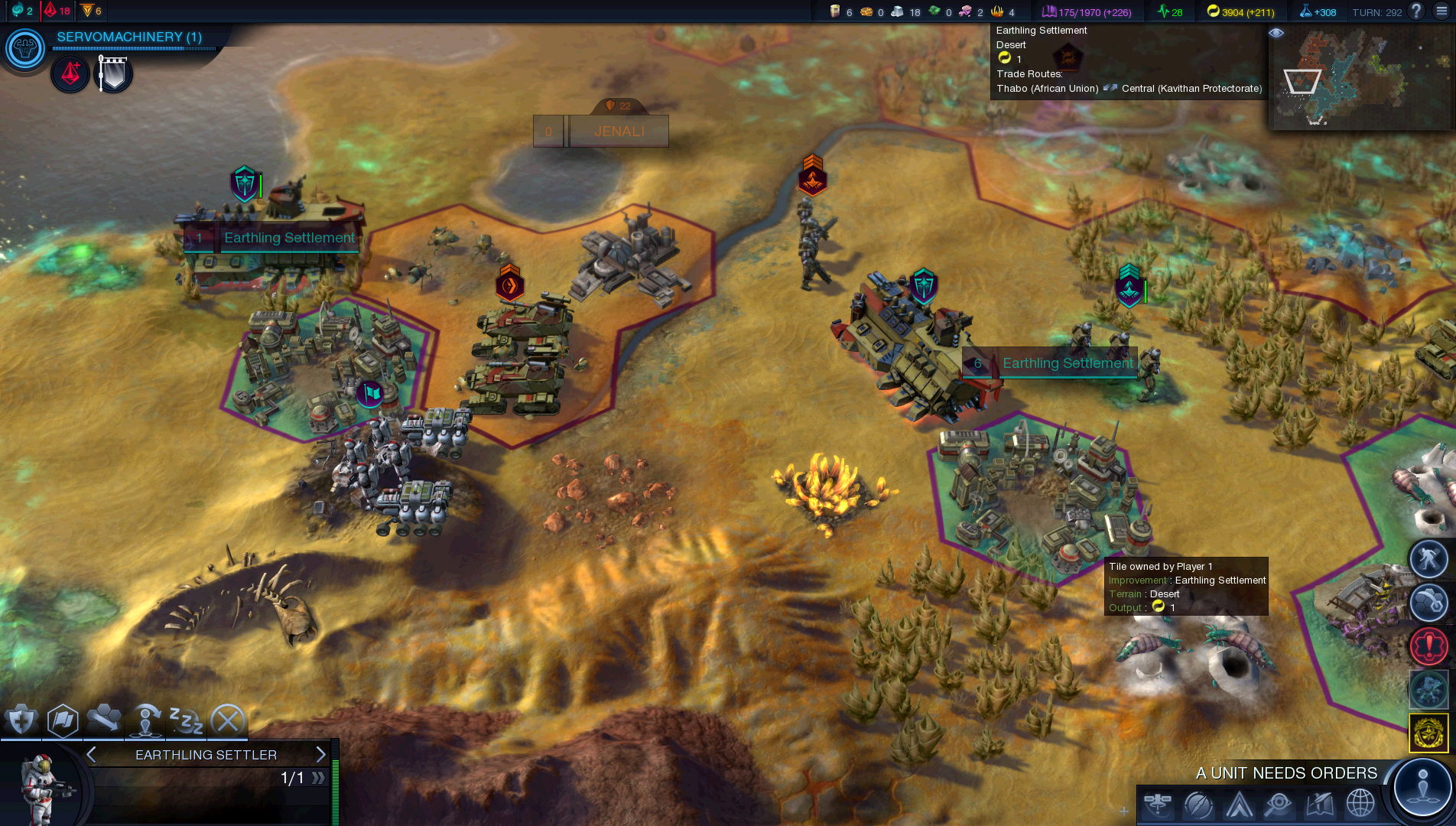 The three Affinities in the game are Harmony, Purity, and Supremacy. Harmony means a player has essentially decided to work together with the planet’s unique environment and native wildlife, and they gain attributes and unit types accordingly. They’ll become immune to the poisonous miasma that dots map tiles, for instance, and will even get a buff from it accordingly, and they’ll develop units that include alien beasts. Purity players strive to maintain human ways, and embrace the Earth tech of the past, while enhancing it. They end up with tremendous firepower, and good defense. Supremacy embraces evolution through tech, including cybernetics and AI. Players in this Affinity will have units that gain additional attack bonuses, and robots that are especially strong at range.

Playing through these found my natural inclination to tend towards the Harmony Affinity, but each player will have a particular style of gameplay and Affinities can complement those in different ways. Experiencing all (and various combinations of the above) also offers a lot of replay value to the game overall.

Likewise, the tech web that is non-linear, and not intended to be completed entirely by game’s end, offers a lot of variety for players going through on their second try. Techs also are now nested, so that there are so-called stem technologies which have two leaf techs underneath. Researching the desired leaf tech requires learning the stem tech first, but you can click on your ultimate desired tech to research all the prerequisites first, too. Tech in the game feels less like a storied march through history, and more like a set of choices about how best to respond to the unique demands of a specific situation, in this case interstellar exploration. It perhaps feels less grand than in previous games, but unlocking its potential is no less fun. 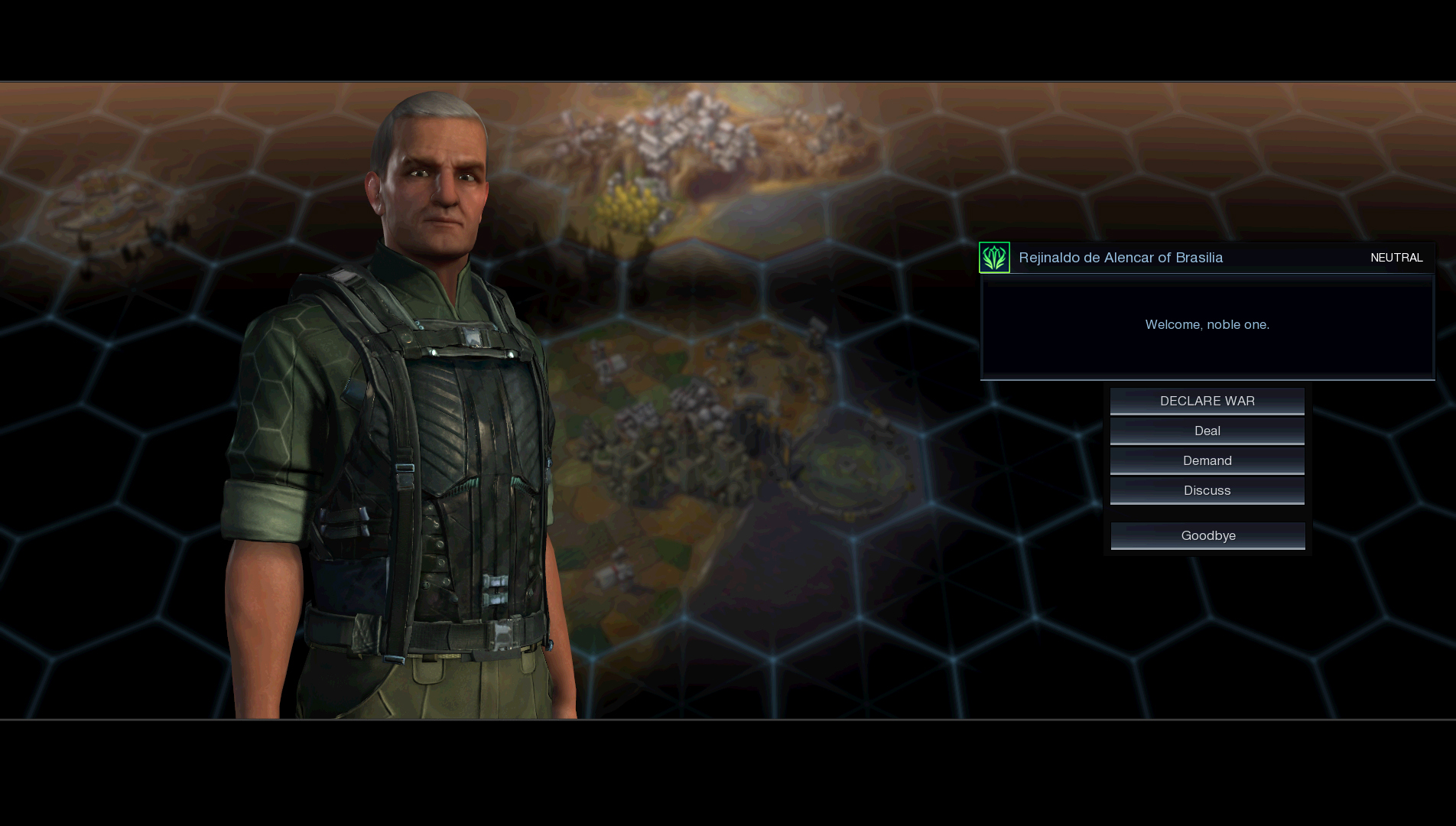 Other new features in this game include Health and Quests. Health limits your ability to grow rapidly and annex new cities effectively by introducing a penalty to overgrowth. In order to combat it, you must outfit your cities with facilities that provide health bonus, and ignoring it will quickly result in penalties to productivity, trade and other factors that could gravely effect your ability to go to war, or to research quickly enough to keep up. My own style of play tends to favour military victories, accomplished through quick colonization and conquering, so this proved a difficult change to get used to. Still, it’s a good challenge that makes sense in the logic of the in-game world, and military players can still get their jollies once they come to terms with it.

Quests arise whenever you build a new building type, or when you stumble upon a special tile on the map. Building-related quests merely ask you to make a permanent choice about what kind of bonus that structure will provide, and map quests usually involve explorers developing a tile or a sending a unit to check something out. They provide some interesting variety amid the general grind of Civ’s traditional turn-based gameplay, and are a nice addition to the overall experience that feels natural. 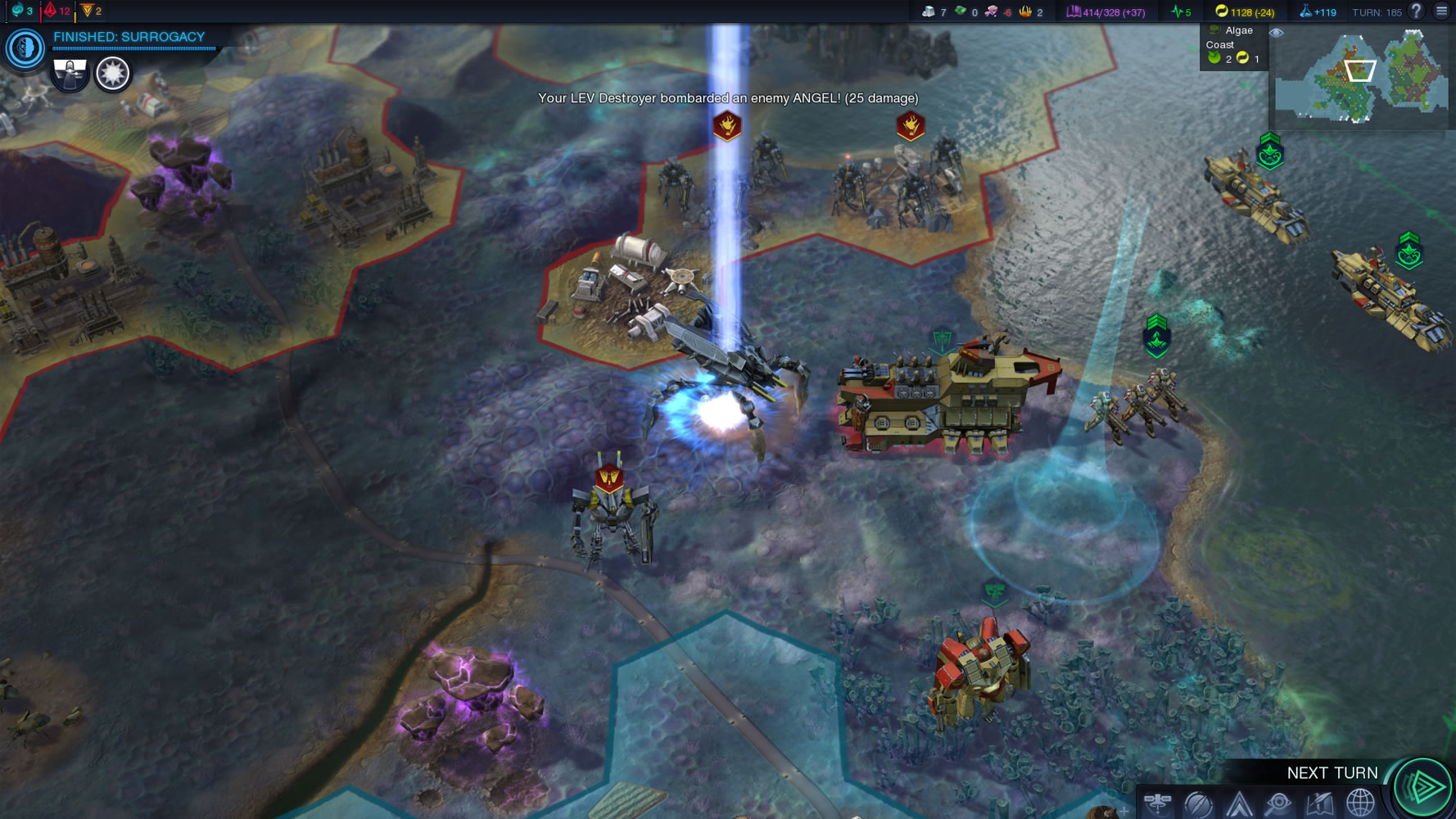 To win Civilization: Beyond Earth, you can either destroy everyone else (my preferred way of winning) by removing all their capitals and key cities, make contact with an intelligent former planet resident race, invade Earth if you’re a Supremacy player, escort and settle a delegation from Earth if you’re Purity player, or become one with the planet if you’re a Harmony player. The three Affinity victories require building an endgame structure, which is similar to the space-based victories in previous titles. All will dictate a unique style of gameplay, but all provide a fun experience. The tweaks to the combat system and unit development mean I’m even more of a military conquest fan than ever, however, despite (or perhaps because of) the addition of Health to prevent runaway military domination.

In the end, this is a true Civilization game, and a worthy successor to the epic Civilization V. Its sci-fi attributes mean the game designers got to spread their wings a bit more than usual, and the mechanics introduced here back up the fanciful, but also realistic, vision of a future where space colonization is the next step for the human race.