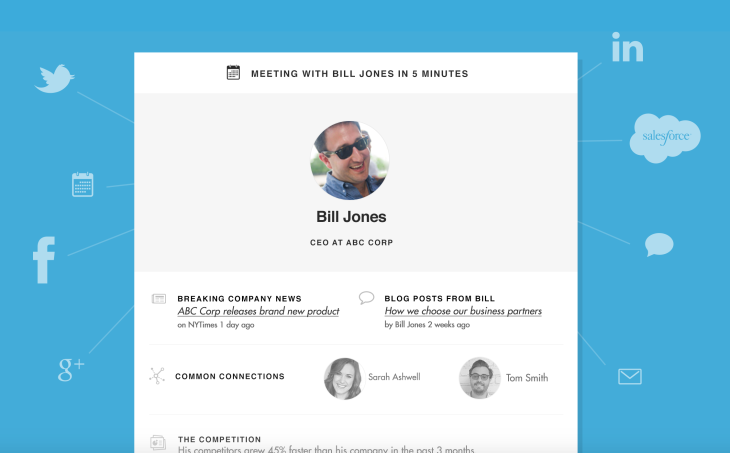 A new web application called Charlie has raised a seed round of $1.75 million led by Lightbank Capital. The product emails you short, automatically generated one-pagers detailing what you need to know about the people you’re about to meet with, based on your Google Calendar entries.

If this idea rings a bell with you, it’s because Charlie is not the first in recent months to come up with a tool for keeping you up-to-date via mini dossiers on those you’re preparing to meet on any given day. Another product, called Refresh, does something similar, but is a mobile-first product designed to alert you on your phone with your meeting reminders. Refresh not only tells you who you’re meeting with, but also why – the app pulls from hundreds of sources, and it resurfaces your past conversation history, too.

Charlie takes this concept, and turns it into a product that works over email. That’s not a bad idea, given that email still remains the dominant “social networking” and communications app of all time. Email newsletters are still a thing, and Google’s reinvention of Gmail this week via its new “Inbox” app is one of the hottest tickets in town.

To use Charlie, you just connect the app with your Google account so it can access your calendar, as well as your accounts at other social networks. Then, an hour before your meeting, the service will send you a digest with information drawn from over 100,000 sources, including social sites like Facebook, Twitter and LinkedIn, plus news via Google News and more. It will show you things like that person’s latest blog posts, which connections you have in common, company and competitor news and stats, and even common interests, in case you have a need to make a more personal bond.

To some extent, the service competes with email add-on tools like Rapportive (now owned by LinkedIn) or Discoverly, both of which put social networking links and data in your email sidebar.

The company claims its automated digging saves you the equivalent of 57 Google searches, if you were to pull up the same amount of information. You can also manually request reports based on a person’s email and name, even if you don’t have a meeting on the books.

It’s obvious why something like Charlie and its competition would be useful, but the question now is whether this makes sense as a standalone product that people will (presumably) one day pay for, or if it would succeed better as a feature within a larger app or suite of apps — whether that’s a network like LinkedIn, work tools or CRM provider or something else.

The new funding will help Charlie grow its business, integrate more data sources, and bring its product to other platforms, including Outlook. I can’t speak yet to its effectiveness when compared with Rapportive, because I don’t have meetings scheduled for the next hour, and the sample one-pagers on Charlie’s website seem to be broken, meaning I can’t run tests. (Not a good sign, but it is launch day and the servers may be challenged to keep up with demand.)

Chicago-based Charlie is headed by CEO Aaron Frazin, previously of Prezi, and CTO Rob Volk, previously from diet and nutrition company Beyond Diet, where he was also CTO.

A new web application called Charlie has raised a seed round of $1.75 million led by Lightbank Capital. The product emails you short, automatically generated one-pagers detailing what you need to k...