What do you do when Facebook clones your app?

That’s a situation that Onno Faber, the founder of buzzy messaging app Taptalk, ran into when Facebook released Slingshot, its second effort at an ephemeral messaging app which borrowed many cues from Taptalk.

“It’s obviously a bit weird,” Faber told TechCrunch co-editor Matthew Panzarino at Disrupt Europe in London. “I didn’t know [about it], I found out about it by reading it in the press. You feel kinda bad, it isn’t nice.”

There’s an argument that big companies validate the services of smaller companies when they take inspiration from them, but Faber admitted that he and his team did not feel that way at first.

“We’ve devoted our lives to this company, our energies over the last few years have been spent working on it, so it is painful,” he said. “But, at the same time, we saw that Facebook missed some things [with Slingshot]. We know that we know more because we have been working so hard on this space.”

Faber admits that the experience has helped him get over being cloned. “I don’t even look at the clones anymore; we are doing our thing,” he added.

No doubt Facebook’s move also helped Taptalk gain the broader attention of the tech community. Investors began taking a big interest in the company after May, when rumors of Slingshot got out before the app’s launch in June. Sources inside Facebook suggested the company’s engineers had been “all over” Taptalk while designing Slingshot.

Taptalk — which Faber revealed is currently in the midst of raising a new round of funding — has always been styled and designed in its own way, its founder said.

Faber, who hinted that he prefers iOS 7 to Apple’s sparkling new iOS 8 platform, said that the company has dispensed with modern design trends and styles in favor of a user experience that is just intuitive.

“We believe that you need to get technology out of the way when you intersection with someone,” Faber said. “When we are designing our app and there is a menu or button on screen, we ask whether we can remove that and if it still makes sense to our users.

“We chose not to use patterns that we know too much, we try to go back to the basics/roots. For example, many people are used to previewing photos, but that doesn’t mean it is good for everyone.” 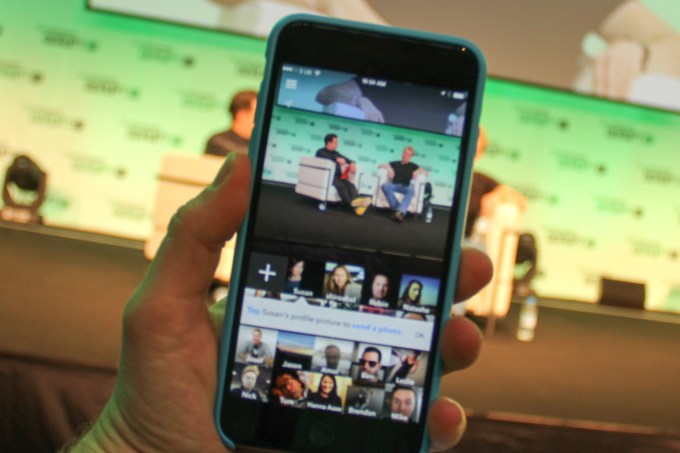 While app design may be commoditized, particularly around messaging apps, many companies are turning to ‘growth hacking’ to help grow their user bases. Whether it be options to share the download link with your address book, or push pre-designed messages to email contacts, many apps dip into networks, often without users themselves being aware of what they are doing.

Faber was adamant that Taptalk has never engaged in such spamming, nor does it ever intend to.

“We are selfish about these things,” he said. “The problem with growth hacking is that I don’t believe that you can put a Silicon Valley growth hack sauce into your product and it will work.

“It’s something that needs to align with the thinking behind the product. In our case, that isn’t spamming all your friends because we aren’t about that. We are personal, one-to-on communication. That’s where we start, we aren’t throwing tricks.”