From Chicago’s city of big shoulders to the new businesses bolstering Detroit’s renaissance; in Cleveland and Cincinnati and Kansas City and St. Louis, startup economies are flourishing across the Midwest.

The proof is in events like Steve Case’s Rise of the Rest tour, a whistle-stop paean to entrepreneurship whose first leg wrapped up over the summer. Case just finished his second turn through the Midwest this month, writing $100,000 checks to winners of pitch competitions in cities like Madison, Wis., Minneapolis, Des Moines, St. Louis and Kansas City.

Beyond AOL’s (the owner of this fine publication) former chief executive making it rain, the midwest is having a banner year. In fact, the region is on track to see more companies funded this year, than at any point in the past five years, according to CrunchBase data. 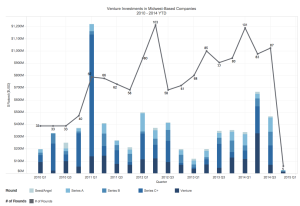 As the most populous city in the region, it’s no surprise that Chicago is the fastest growing hub in “Silicorn Alley” in the development of its investment ecosystem. In the first eight months of 2014 Chicago saw $6 billion in exits through public offerings and sales, including the recent sales of TrunkClub to Nordstrom, and Apartments.com to CoStar Group.But beyond the windy city, startups are cropping up across the Midwest’s silicon plains. 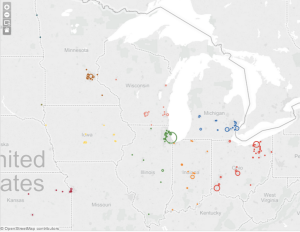 “When you take Silicon Valley out of the mix, we’re near the top of that heap,” says Jay Robert (J.B.) Pritzker, a founding managing partner with The Pritzker Group Venture Capital.

What differentiates Chicago, and much of the Midwest, from the rest of the venture capital industry is the fact that many of the region’s most successful entrepreneurs built their businesses without the luxury of seas of capital.

“If there isn’t a ton of venture capital available, then you better build [a business] with customer revenue and whatever money you can bootstrap,” says Pritzker.

For many years, that’s exactly how entrepreneurs in the midwest grew their businesses. Now, thanks to the exits from some of those entrepreneurs in companies like Groupon (whose co-founder, Brad Keywell, has gone on to found Lightbank in Chicago); there’s new capital available to jumpstart early stage businesses. Beyond capital, the broader tech community in Chicago now has resources like Built In Chicago, where anyone can find information about what’s going on in the area.

“This is my third company. My last company I built from scratch and sold it,” says Talia Mashiach, the founder and chief executive of the startup Eved, which is providing a toolkit for events and event management. “With 1871 and all the effort that’s been put in around Chicago it’s been a little easier, because the community is farther along.”

Success stories like SMS Assist, which provides facilities management; kCura, an e-discovery company; and GoHealth show that Chicago’s ecosystem is about more than retail or food delivery.

In part, what Case terms ‘the rise of the rest’ is nothing more than the extension of Marc Andreessen’s (now three-year old) op-ed in the Wall Street Journal about software eating the world.

“Everything in the world is a tech deal,” says Pritzker, who also invests in later stage private equity deals. “In every one of those companies, technology is becoming the most important part of the business,” he says of his private equity portfolio. “If you’re not doing tech deals, you’re kind of missing a lot.” 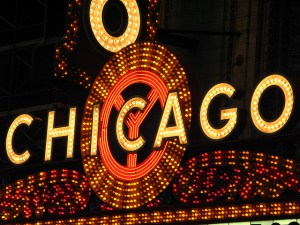 Mashiach agrees. “The midwest is a great business-to-business play,” she says. “It’s strong on customer service and product management.”

The region’s success extends far beyond Chicago, according to investors like Steve Case and new firms like Drive Capital and Flyover Capital, who are planting a flag for midwestern technology companies.

With Case, and the winning companies from his pitch competition (who all received $100,000 personal checks from the serial entrepreneur and investor), the whistle-stop tour is one step in a process that will culminate in Austin at SXSW. There, each company will go head-to-head with the hope of being the ultimate winner of a larger pot of cash.

“The rise of the rest is not so much about us, it’s about trying to shine a spotlight on these cities,” says Case of the bus tour which wrapped up earlier in October. “It’s about how do you get investors to realize that there are opportunities in these cities. [And that] the valuations are lower for those companies than they would be if they were in New York City or Palo Alto.”

There’s something wrong with an investment world that sees 80% of capital commitments going to basically three cities in the U.S., Case says. “I think there’s a need for more capital, and more capital is coming,” Case says. He points to recent investments in the Midwest from firms like Andreessen Horowitz and Union Square Ventures (both investors in Dwolla) as indicators of a changing perception among venture investors.

And the Securities and Exchange Commission is finalizing rules to allow a broader group of investors to back startup companies, which Case believes will help bridge the asset gap between cities in the middle of the country and the big centers of venture capital investment.

Democratizing capital flows can have ancillary benefits in addressing venture capital’s persistent problems with finding investable companies started by women or minorities, according to Case. “The last data I saw showed something like 60% of the successful projects on Kickstarter were flowing to women, and in venture capital that number is 10%,” Case says. “We should give everybody who has an idea a shot [and] I think crowd-funding will help there.”

Case sees this as the fruition of seeds he’s been planting for a very long time. “This is the work I’ve been doing for the last five years, seeing how we make sure that entrepreneurs at any stage have as many options as possible,” Case says. “All we’re trying to do is throw some kerosene on the fire.”