Tinder’s interface for quickly filtering people you might like to date from those you definitely don’t is being applied to all sorts of other sorting tasks. We’ve had multiple Tinders for shopping, for instance. And here at the Disrupt Europe 2014 hackathon in London we’ve just seen a Tinder for news stories, called Newsly, presented on stage.

The three-person strong team of UCL students behind Newsly hacked overnight, using machine learning APIs to create a news reader app that tailors which articles the user sees based on their personal preferences. The reader is shown articles on cards (below, right) that contain the headline, subhead and article image. They then swipe right if they want to read an article or left if they don’t. Just like Tinder.

About twenty swipes will generate enough data to start tailoring the articles being pulled in to the user’s preferences, according to team member Davit Buniatyan. 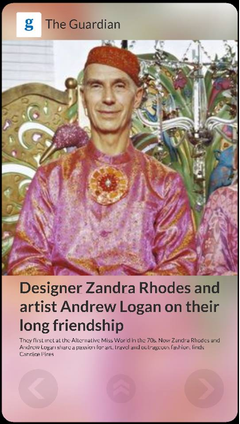 “The Facebook News Feed is based on 20 previous likes. So it’s kind of this one but the advantage over Facebook is we have also dislikes which is very important in training [the algorithm],” he tells TechCrunch. “Every time you swipe it will learn more about you.”

The user preference data being generated then has clear value for advertisers wanting to target ads, he says.

“We’re using the Intel Mashery API that pulls information from The Guardian,” adds Muhammad Rafdi, noting that other news sources — *ehem*, TechCrunch — could easily be added to broaden the mix of possible news.

For tailoring news content to personal preferences the app is doing natural language processes. “It searches through the [news] content — it does a text analysis, and the text analysis will produce keywords which are then stored into the server,” explains Rafdi. “After several queries it builds up a new one and then that will fetch a new list of news feed based on your preferences.”

“The idea is derived from Tinder but we implemented our own algorithm,” he adds.

For the MVP they built overnight the team didn’t have time to add additional features — such as a read later list — but that’s one obvious feature to implement. Letting users actively specify news topics they want to read about (via keywords) is another obvious addition.

To prevent the Newsly user’s world view narrowing to a vanishing point of sameness, the app resets preferences after a set period. There’s also a random element built in to deliberately include articles that are not part of the preference processing. “But the main part is machine learning because the user should feel it learns from you,” adds Buniatyan.

While this latest Tinder for X project is focused on news, there is of course plenty of scope to apply its ‘Tinder + machine learning’ formula to other categories of content and tasks.

“Maybe something for investors as well,” says Rafdi. “That gives them a list of startups that they might like [to invest in]. Using the CrunchBase API it can provide the app with lists of companies and investors can just swipe left or right.  And eventually they will find the right match.”

Newsly is currently open source, and Rafdi invited people to contribute to the code on Github. “Currently there’s only three contributors, which is the team, but if we like what people do with the code we can just pull in the changes and then merge the code,” he adds.