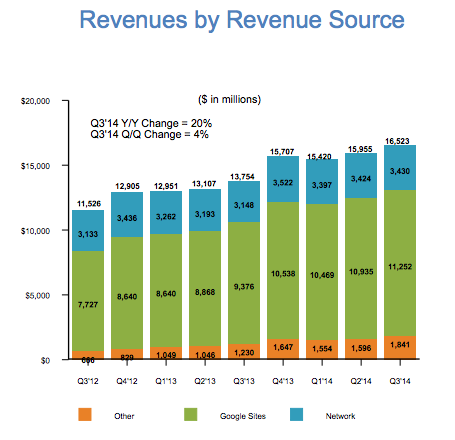 Google fell more than 1 percent in regular trading. In after-hours trading, following its mixed earnings report, the company is down more than 3 percent. (Update: Google, off more than 5 percent at one point, is now down a more modest 2 percent.)

Google is working to expand its revenue base away from advertising. It is currently locked in the intertwined productivity-storage-cloud computing wars with Amazon, Microsoft, Box, Dropbox, Egnyte, Apple HighQ and others. Declining prices in that space have lowered short-term revenue potential, but that fact has done what I estimate to be a grand total of zero to lower competitive tension in the market area.

The company reported net income of $3.72 billion in the period.

Breaking down Google’s revenue by segment, you have the following:

The company reported that its average cost-per-click fell 2 percent in the period, a weakening in a key revenue source. However, pushing back against that decline was a 17 percent year-over-year increase in ‘aggregate paid clicks.’ So, while the amount of revenue that Google managed to extract from a click went down mildly, it sold more than one-sixth more compared to the year-ago quarter.

Google remains incredibly rich — its cash tally now sits at $62.16 billion — and profitable. However, investors were looking for a touch more growth on both the top and bottom lines. The search giant is healthy and investing. Investors perhaps need to temper their short-term expectations a touch. For Google, it’s full steam ahead.

The company now employs 55,030 full-time employees. That’s up from 52,069 from the end of its sequentially preceding quarter.

As a final note, Google and Microsoft now have nearly identical market caps. Something to ruminate on.