Today King Digital, progenitor and purveyor of the formerly ubiquitous game Candy Crush closed at $11.25. That figure is precisely half of its IPO price of $22.50 per share. The company fell in its first day of trading, and has had a rough life in the intervening period.

A quick scan of its chart implies that the company has only managed to trade above its IPO price for the briefest of moments. For public investors, it’s been a rough ride.

Partially caught up in the recent pullback among technology stocks, King stands out: While most tech shares managed to hold their own today, or even recover some of their losses, King fell a fresh 6.79 percent. In after-hours trading, the company has shed another fraction.

Commentary has run sour on the company. I’ve heard privately from investors that King should not have been allowed to list at all. I’ve heard publicly from others today that mirror the sentiment. This is also a pretty decent point:

King, ironically, makes money, and announced a $150 million dividend during its last-quarter earnings announcement. However, compared to its per-share declines, the cash disbursement is minor, and does little to undue the damage that the company has caused to some portfolios.

Now down 50 percent from its list price, what’s next for King? Investors are bearish. It’s up to you to call the bottom. 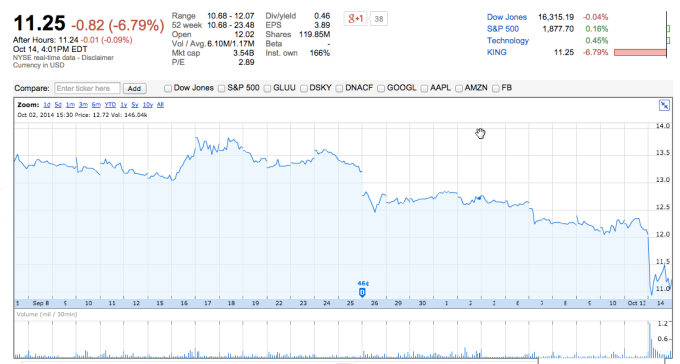