Two new applications, Drop and Push, want to save you from having to download multiple news apps or browse dozens of websites just to keep up with the topics that interest you. But what makes these two apps different, when compared with news aggregators or other mobile news readers (aka RSS readers), is that they primarily function via push notifications.

The apps themselves, once installed and configured, are somewhat invisible to end users. You interact with the push notifications themselves, and never really return to the apps unless you want to subscribe to more channels or delete existing ones.

Both apps are simplistic — minimalistic, in fact — in their design. They each offer a way to subscribe to channels from a suggested list of news sources, along with the ability to enter your own topics.

And that’s about it.

According to co-founder Omar Arambula, who created Push along with Hector Lopez and Eddy Homez, the team decided to develop the app because they were annoyed with having to launch multiple apps and websites to receive information. 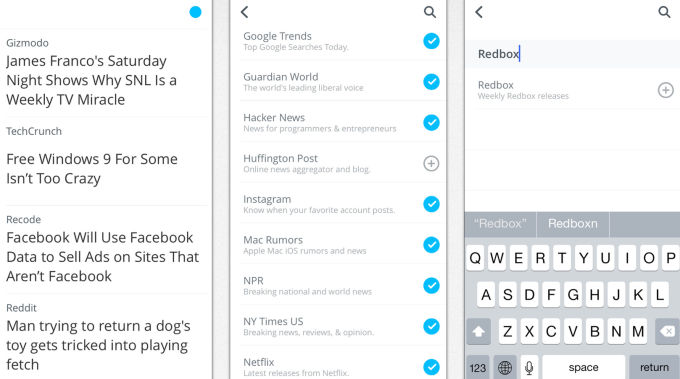 “Having a centralized location of information, especially if you don’t need to swipe open your device, makes it really useful,” he tells us.

While Push recommends a number of well-known news sources, such as CNN, the BBC, Drudge, The Economist, HuffPo, NPR and many others (including tech sites like this one), it also lets you subscribe to other types of news and information, e.g. Reddit’s front page, new releases on Netflix, popular videos on Vine, trending topics on Twitter, iTunes’ top song of the day, Google Trends, daily forecasts, and several other channels that you may have previously accessed via standalone mobile apps.

When you see the push notification on the lockscreen of your iOS device, you can simply delete the notification if the text of the pushed message is all you care to consume, or you can swipe to go directly to the URL of the website with more details, like a news article or a series of hashtagged tweets, for example.

Similarly, another app called Drop, created by four students from Paris, offers an experience much like Push, but is available on both iOS and Android.

Drop’s interface is a bit more colorful, as each channel you subscribe to is color-coded to make it easier for those with longer lists to locate a subscription. And the user interface first prompts you to enter any topic of your choosing rather than starting you off with a list of suggestions. (This is available instead by pushing the “No inspiration?” button which then takes you to pre-configured topics.) 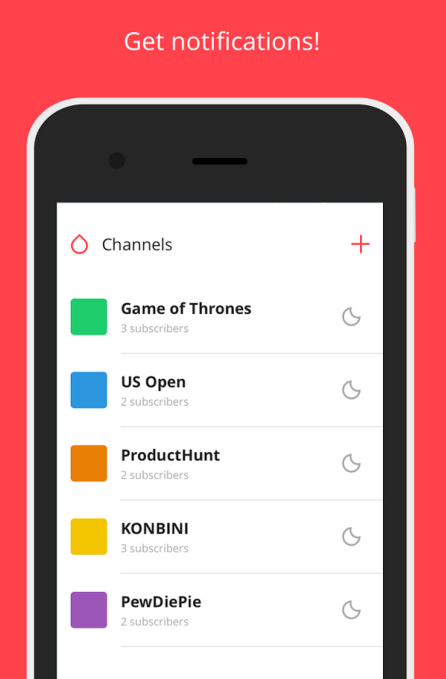 But the overall concept is the same: instead of downloading a ton of news apps, you just interact with the push notifications that Drop provides.

Drop co-creator Charles Ganem says a new version of the app is roughly two weeks away and will include an improved user experience plus other features.

But for now, Drop’s suggested list is a bit shorter than Push’s. It includes news sites as well as other types of “breaking” information, like the option to receive a push when there’s a new episode of a favorite TV show (like “Game of Thrones”), or you can receive pushes when a product reaches over 100+ upvotes on ProductHunt. (Drop itself launched on ProductHunt around a month ago, and received 535 upvotes — a more than decent showing).

As one commenter on ProductHunt noted at the time, the app seemed a lot like Broadcast from App.net, which also let users receive news alerts as push notifications. That never really took off, which could imply that a majority of mobile users aren’t that interested in push-based news and alerts, and still prefer visiting news sources and standalone apps on their own. 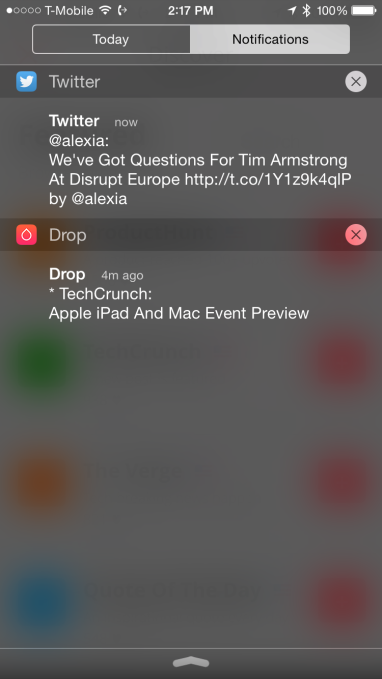 Or it could just be a timing issue. After all, we are now starting to see a trend toward lightweight apps, like Yo, or even nearly “app-less” apps, like the social app Wut.

TechCrunch co-editor Matthew Panzarino referred to this shift in mobile behavior earlier this year as the “rise of the invisible app.”

In a post referencing Foursquare’s Swarm, he noted that we’re now entering an age where apps function as service layers. No longer battling for a ‘homescreen’ position, new apps are emerging that are only meant to be used when they have something to explicitly tell you, rather than functioning as time-wasters you browse idly during your downtime.

Push and Drop fit into this larger trend, and even go further than Swarm as they really never need to be launched more than once.

Both apps are available as free downloads and require no registration. Future business models could involve sponsored pushes, though Apple may not permit such a thing.

Drop is available here for iOS and Android. Push is free on iTunes.