Since being acquired by LinkedIn, things have not been going well for Rapportive, the handy Gmail widget that shows your contacts’ social accounts and updates in Gmail’s sidebar. LinkedIn, in the spirit of making the Rapportive app more favorable to its own network, ripped out much of the functionality that made it popular in the first place.

But today, an alternative to Rapportive is now making its debut: Discoverly is introducing a Gmail widget that works like the old Rapportive, showing the complete social profiles of your email contacts, including those on Twitter, Facebook, AngelList, Crunchbase and more.

Discoverly, for those unfamiliar, already offers a Rapportive-like product for the social web. Through the use of a browser add-on, you can view more data about your connections when viewing profiles across the web. For example, you can see your mutual Facebook friends on LinkedIn, or see Facebook and LinkedIn info on Twitter.

But with today’s launch of the Gmail support, Discoverly is finally tackling the gaping hole that Rapportive’s exit and subsequent changes introduced.

You may recall that LinkedIn’s Rapportive stopped showing Facebook and Twitter information for contacts’ who didn’t list those networks on their LinkedIn profile. And it no longer shows contacts’ recent tweets and status updates. 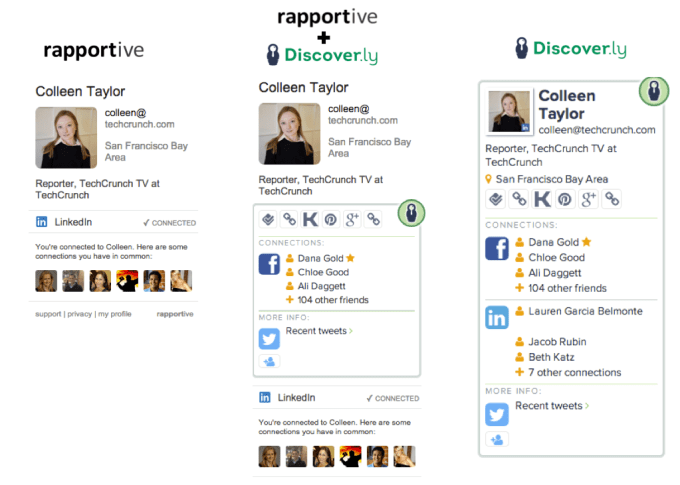 Discoverly, on the other hand, will list your contacts’ social profiles, show you a list of mutual friends, and offer you a quick way to view recent tweets. And if you want to keep Rapportive installed, you can. “We have tons of respect for Rapportive,” says Discoverly CEO Theodore Summe.

“And in the spirit of that respect, Discoverly can work in concert with Rapportive, injecting additional social data to Rapportive so users get a complete view again,” he says. “For non-Rapportive users, Discoverly works much like the Rapportive of old, showing the complete social profiles of email correspondents.”

Currently, Discoverly’s active users are using the Chrome extension around 13 times per month, but their usage comes in bursts. Sometimes, they’ll jump into it and spend a solid 15 minutes researching something, then not touch it again for another week.

That’s why Summe says the Gmail plugin will now be Discoverly’s flagship offering – because users are more regularly logged into Gmail. In addition, those using Rapportive are already used to glancing over at the sidebar for additional context about the people they’re communicating with in their inbox.

The product launching today for Gmail users is only the beginning. Going forward, Discoverly will work to integrate other social networks into the widget, even expanding its use case beyond the hard-core “networking” crowd to allow for things like seeing a friend’s last photo posted to a photo-sharing site, like Instagram, for instance.

And the team will also work to introduce an experience – either within Gmail or as a standalone web app – that lets you see and analyze all your connections across networks.

“The hard part was building the data set, which we’ve built,” explains Summe. “Now it’s about giving users a good UI to manage that data.”

Discoverly’s updated plugin with Gmail functionality will launch today. You can grab the current extension from homepage here.