Facebook has long been promoting the the idea of free, zero-rated mobile services in emerging countries to drive more Facebook (and wider mobile data) usage. Now, its Internet.org initiative has crafted another way to promote growth: by working with directly with carriers to analyse and fix their networks, with a recent trial in Indonesia — the fourth-biggest country for Facebook usage — speeding up mobile network speeds by up to 70%, the company says.

Facebook says that the project in Indonesia will be a template for further markets. “Thanks to this research, we now have a replicable model for analyzing, measuring and improving network performance that can be applied to any mobile network,” the company says. “Unfortunately, no additional details to share right now on future projects.” With Internet.org’s free access app launching earlier this year in Zambia, this could be one country on the list to tackle.

It highlights an interesting evolution in Facebook’s role abroad. While helping make its service more accessible in developing markets, and investing in more interesting ways of charging for it, Facebook is also positioning itself as an ally to carriers. And whether you look at Internet.org cynically or not — it does, after all, feed into Facebook’s growth plans — there’s a place for more attention to better data access.

Working directly with carriers to fix their networks will help raise Facebook’s profile with them, and potentially give it more negotiating power when talking with those carriers about turning on services like zero-rating. This highlights a wider trend of how internet companies appear to be working ever-closer with carriers to grow their reach.

The social network, now with over 1.3 billion users globally, carried out the project in Indonesia via its Internet.org initiative, along with Ericsson (another Internet.org member) and Indonesian mobile operator XL Axiata. You can see the full results in a white paper it has published.

This was not a random choice of country or carrier: Indonesia is the fourth-largest country for Facebook usage, and XL Axiata says that Facebook is by far the most popular service among subscribers who use mobile data (over half their base is currently paying for mobile data services).

The idea behind the work in Indonesia is that zero-rated Facebook access may lower the gates for people, but it doesn’t tackle one of the bigger problems that prevent zero-rating from working: many carriers in emerging markets simply lack the infrastructure or funds to invest in the fastest data networks.

According to a recent study from McKinsey, there are some 4.4 billion people offline in the world today, with 3.4 billion of them concentrated into 20 countries (a target list for Facebook, perhaps?).

Facebook, working with Ericsson and XL Axiata, created a methodology to “analyze, monitor and improve end-to-end network performance” — not on the live network but using simulated Facebook application use cases. The tests and improvements, incidentally, were all carried out on Android devices (a signal in itself of just how dominant the platform is for smartphone usage in emerging markets).

Over the first six months of 2014, the three developed a process to simulate app use: “using a test agent developed by Facebook, typical Facebook interactions were triggered and measured on different mobile devices in urban, suburban and rural regions across the XL Axiata coverage area,” the white paper on the project notes. 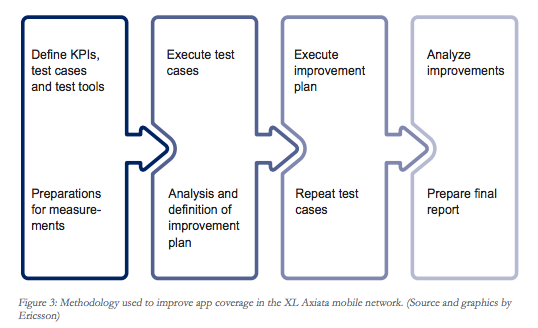 After seeing the results, the three made network-wide “adjustments” that sped up the network by 70%. The idea here is not to lay on more infrastructure investments, but to work on fine-tuning what is already there. “We now know that it is possible to increase network performance using existing network resources, which is key to helping close the connectivity gap,” the company notes in a blog post.

Facebook is also trying to tackle the connectivity from another angle: the company has hosted a hackathon in Indonesia’s capital, Jakarta, focused specifically on creating apps that are more data-efficient for markets where decent data connectivity is in shorter supply or is too expensive.

The Internet.org work is being made public as Facebook CEO Mark Zuckerberg travels in Indonesia and meets with its president-elect and current Jakarta Governor Joko Widodo (first stop on the trip: the temple at Borobudur; pictured above, Zuckerberg photographing other tourists at the site). It’s part of a wider trip Zuckerberg has been making in Asia, which also included a visit to India last week and the unveiling of $1 million in prize/funding money for new app developers.