Tesla unveiled the 60D, 85D, and the higher end P85D at what was a very glamorous, red carpet event at the Hawthorne Airport just outside of Los Angeles, California.

The crowd of about 4,000 gasped as Elon Musk, Tesla’s CEO, told them the new car could go a mind blowing 0-60 MPH in 3.2 seconds, making it one of the fastest sedans in the world. “You’ll be able to choose three settings: normal, sport and insane,” he joked on stage to those who came to take a peek at his new “D.” Musk confirmed that the “D” he had hinted at earlier on Twitter was in fact the built-in dual motor, all wheel drive for the “D” series vehicles.

Here’s a look at Musk on stage with a mechanically suspended chassis for the new vehicles that was based on the Model S:

“Okay that’s probably as much D as we want to show,” said Musk after, to much laughter from the crowd.

Musk also revealed that the new vehicle could brake at some very high speeds. The new P85D goes up to 155 MPH. He then told the crowd the vehicles could self-park, “When you get home you can get out of the car and it will go in and park itself.”

The car will even come when you call it on your phone. Musk admitted it wasn’t entirely self-driving, though. “You can’t just fall asleep and wake up at your destination,” he said. But if you add a location to your calendar the car will actually show up there on time to pick you up, according to Musk (it’s not entirely clear how this works if the vehicle isn’t self-driving).

What Musk didn’t mention during his presentation is that the D series starts at a base of $89,570 for the 60D and, depending on the options added to the higher end P85D, that price can get up to $170,000. Not an easily obtainable purchase for most American car buyers at even the lower end model. The Tesla S, for comparison, starts at $70,000.

Sales were slow this summer for the S and just 11,000 of those vehicles have been sold in 2014 so far. However, Tesla says it plans to sell at least 100,000 of its cars annually in the U.S. alone by the end of next year. The Nissan Leaf, an electric vehicle priced at one-fourth the cost of the cheapest new Tesla model, sold nearly twice that amount in the U.S. during the same time.

The majority of Tesla buyers are overwhelmingly middle-aged men who make at least $100,000 a year. The same demographic that tends to buy in the luxury vehicle price range. 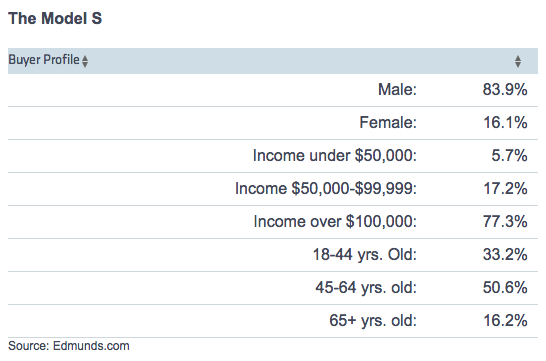 Producing the 100,000 U.S. units and another 500,000 units the company plans to distribute to the worldwide market won’t be a problem once the new Tesla Gigafactory is in place. That will mostly help the company manufacture the supply of vehicle batteries. But how exactly will Tesla sell those high priced cars with cheaper options already out on the road and outselling the previously released models?

It may be too early to jump to any conclusions here. Tesla Motors might be on target to hit those goals based on last quarter’s earnings. The company made a record $769 million in revenue, up from a reported $405 million from last year. Also Musk’s yet-to-be revealed Model 3 will reportedly be priced at a relatively modest $35,000 to start.

The U.S. market may not be Tesla’s biggest goal, either. Musk clearly has his eyes on the global market, specifically looking toward lucrative sales with the newly wealthy in China.

“China has almost 10 times as many cities with more than 1 million people compared to the United States, so we believe the opportunity is substantial…We continue to open stores and service centers worldwide to support our global expansion. For the rest of 2014, the rate of location openings will be fastest in China, followed by Europe, and then North America,” Musk and CFO Deepak Ahuja wrote to shareholders in a company newsletter.

As we mentioned in our live blog post during the event, Tesla’s P85D will start shipping in December. The 60D/85D models will be ready for distribution in February of next year.