Storify, a service that allows users to curate tweets, photos, and other social media posts to create a coherent story, is getting a new design. More than just giving the product a new look, the redesign supports an important new feature — the ability for multiple journalists or other Storify users to collaborate on stories together.

Apparently, Storify hasn’t really supported this kind of collaboration before, as explained to me by co-founder Burt Herman. Sure, two or more people could log into the same account and start working on the same story, and later, they could actually lock each other out so they didn’t end up saving over each other’s work, but that was about it.

So this, Herman said, is the first time Storify has been designed for multiple people to work on a story together, simultaneously — and indeed, some early testers have already used it to cover the protests in Ferguson, Missouri and in Hong Kong. For example, Herman suggested that if you’re trying to create a story highlighting social media posts from an event, and you want to keep that story updated in real-time, one person might want to monitor Facebook while another could keep an eye on Twitter. With Storify’s real-time collaboration, they could both add content to the story as they go.

To make that happen, Storify has created an interface that’s reminiscent of Google Docs, where multiple people can work on different parts of a document at the same time, and with different colored cursors showing you where your other teammates are working. 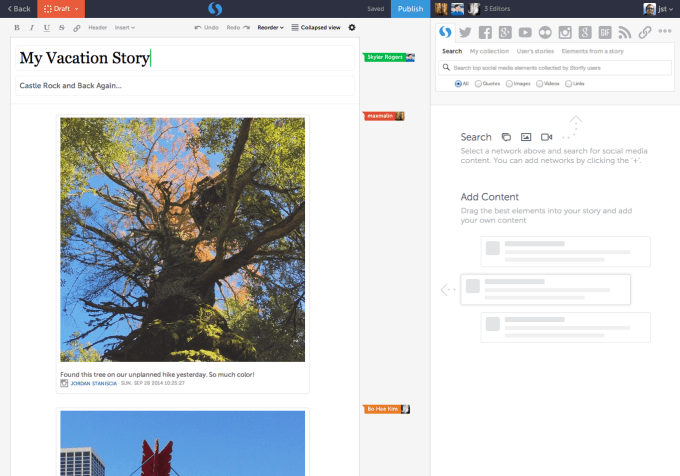 “In some ways, it’s more complicated than Google Docs, because it’s not just text — there are all these kinds of multimedia social media formats to work with,” Herman said.

By the way, it’s been just over a year since commenting platform Livefyre announced that it was acquiring Storify. According to Herman, one of the big changes since then has been a clearer distinction between the free and paid products: “Now we very much are like, the free version is for consumers, enterprise is very clearly for professionals, so let’s give professionals the features that they want.”

He added that over time, we can expect to see more integrations between Livefyre and Storify.

You can read more about the redesign in this blog post.

top image from His Girl Friday, lower image via Storify