In July, eBay announced a partnership with noted auction house Sotheby’s to help bring its inventory of art, antiques and collectibles online via a new live auction format with real-time bidding. At the time, eBay said Sotheby’s was the “anchor tenant” to trial this new format on eBay.com. Today, the company is expanding on these earlier efforts with a number of other well-known auction houses, including Doyle New York, Freeman’s, Garth’s Auctions and Swann Auction Galleries, which will all now feature art auctions via a new section on eBay’s website.

Ebay explains that its live auctions are launching in partnership with Invaluable, a technology provider for live auctions focused on art and collectibles. Invaluable’s software, including its online bidding technology are being used on eBay, while eBay – somewhat ironically, given it popularized the online auction in consumer culture – is delivering access to its large user base of 149 million active buyers.

With the new auctions, buyers will be able to browse catalogs for upcoming sales, then bid for themselves at the online events or enter in absentee bids for those they can’t attend.

The auctions will be hosted on a new site at eBay (ebay.com/collectibles-liveauctions), and will also be available via eBay’s search engine for discovery purposes. 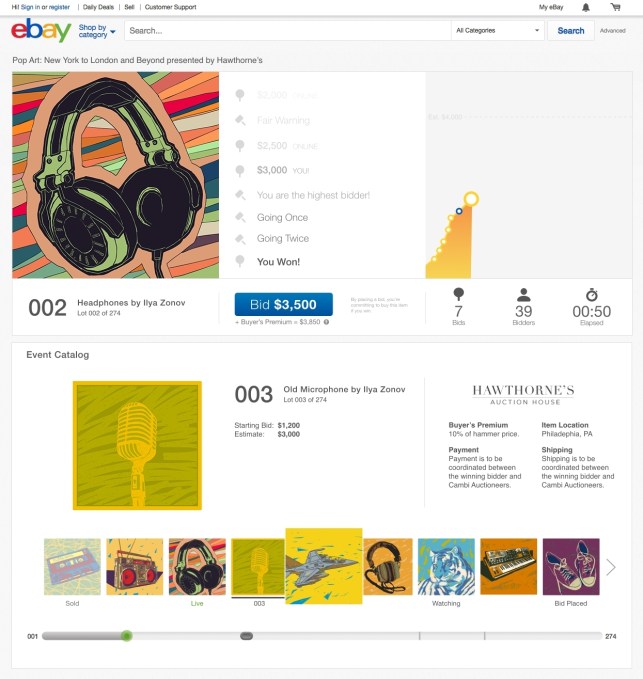 The company also shared a roster of auctions debuting this month, which include everything from fine art to furniture to jewelry, plus other collectibles like travel posters or medical books, for example. The first auction, debuting this Thursday, is one for African-American fine art from Swann Auction Galleries in New York.

While not specifically mentioned in today’s announcement, the roster indicates the art auctions extend beyond the top houses in New York, and will include a variety of art and antique collectors from across the U.S., as well. A variety of upcoming events are from houses based in states like Georgia, Ohio, Pennsylvania, New Hampshire, and California, for instance.

Ebay says that it will soon also begin to offer live Sotheby’s auctions across 18 collectible categories, which coincide with events taking place at Sotheby’s headquarters in New York. The two companies are also exploring themed and time-based sales, says eBay. However, this deal is separate from those being announced now, and Sotheby’s doesn’t currently appear on the new auction site.