The battleground for app discovery in the leading mobile app stores, iTunes and Google Play, has more to do with where an app ranks in the search results, than where it ranks in the charts. Or at least that’s what a new study from ad attribution and analytics company TUNE is saying, citing data that shows how around half of mobile users found the last app they downloaded via app store search. On iOS, 47% said they found the app through the App Store’s search engine, while 53% of Android users did the same on Google Play.

TUNE has some knowledge of this space, having recently acquired mobile marketing platform MobileDevHQ, which helps app publishers to optimize their app’s search rankings. Given its interest in ASO (App Store Optimization, like SEO for app stores), you may want to take the survey with the proverbial grain of salt. However, its figures related to iOS app discovery via app store search are actually clocking in at slightly lower than those cited in prior studies from firms like Forrester and Nielsen, which makes it easier to digest than some standalone company study claiming things that independent firms don’t also see.

Nielsen, for example, said “while most developers focus on cracking the top 25, search is becoming an increasingly important tool in the ‘long tail’ of mobile apps.”

This is becoming even more true as the apps stores continue to expand – now both host well over a million apps apiece, making browsing for apps becoming the passé method for discovery – equivalent to using a directory to locate websites instead of just googling. 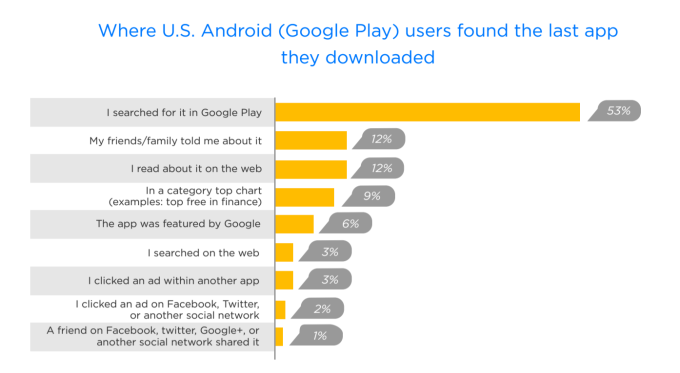 As for the stores own rankings themselves, that’s less of a concern these days. On both platforms, placement on the Top Charts is something app publishers dream about – even going so far as to attempt to manipulate the app stores’ algorithms with paid or bot-driven downloads at times. But in reality, only 10% of users said they downloaded an iOS app because they saw in on the charts, and only 2% said they did so because Apple featured it on the store. On Android, those numbers are 9% and 6% respectively.

Meanwhile, Android users are more likely to have discovered a new app via a web search, which accounts for 3% of downloads versus just 2% for iOS.

That’s not to say that these avenues for app discovery can’t drive downloads – we know developers get a boost when they get featured or highly-ranked, and Facebook App Install business is a major cash cow. But it does indicate that search is an area which shouldn’t be overlooked.

Another few caveats about all these figures – TUNE surveyed 875 U.S.-only users to come up with these numbers, and they’re not referencing trends over time – but rather only asked where users found the last app they downloaded. It’s more of a snapshot in time, rather than some larger analysis.

Another possibly troublesome point is that the survey found that most app users had downloaded something recently – 64% in the last two weeks, and 84% in the last week. That indicates there could be some problems with the way these users were chosen for the survey – after all, comScore recently found that a large majority of smartphone users download zero apps per month.