Tech job marketplace Hired is officially announcing its rollout in LA today. The company had announced it was in New York City earlier this year and now says it wants to capitalize on what it sees as the third biggest startup scene in the country, Los Angeles.

It’s not far off in that assumption. Well-known companies like Snapchat, Oculus and Maker Studios reside down in Los Angeles. A total of $1.5 billion in VC investment was pumped into the startup ecosystem last year alone. That puts funding just under Boston at $3 billion and New York at $2.3 billion in 2013. According to Hired, at least 1,507 LA companies are currently hiring for tech positions right now.

Hired co-founders Allan Grant and Matt Mickiwicz decided to quietly test the LA market earlier this summer. It turned out that was a pretty good bet. According to Grant, Hired saw a 50% faster growth and profitability in the beta phase than in previous new market launches.

“We literarily had nearly 100 start-ups ready to go and begin using Hired the day we opened our doors in the LA market. All of the startups signing up organically, based on word-of-mouth from the success we’ve had in SF and NYC,” said Grant.

“Over $1 billion a year is flowing into the local ecosystem in LA,” Matt Mickiewicz, the co-founder of Hired pointed out to me in an email exchange. “With success stories like Trucar, Snapchat, Maker Studios, the entire city is in a renaissance period.” 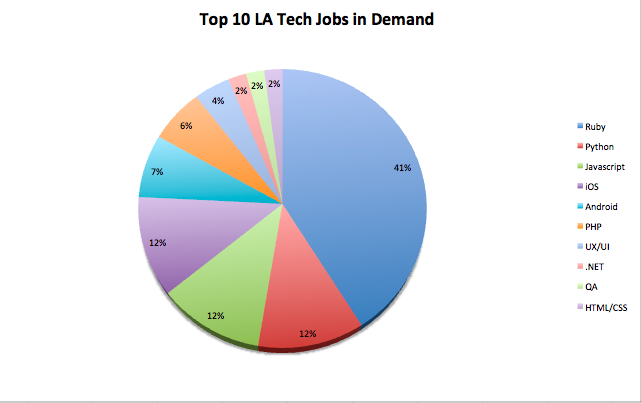 Hired fills a niche down in LA that traditional head hunters and employment sites can’t, Grant points out. “With sites like Monster and LinkedIn you have to wade through a lot of unqualified people. Recruiters and talent both don’t know what they are getting.” Add in great weather, lower cost of living than in Silicon Valley, top schools like Cal Tech that churn out 2900 engineers a year plus other talent such as UX/UI designers and front end developers and pair all that up with the growing tech scene. That seems to be a winning combination for the startup. Grant says Hired has already helped place engineers at Whisper, Demand Media, ThinkNear, StackSocial, Tradesy and Spokeo.