One of my favorite 3D printers has been the Formlabs Form 1. Using a unique technology in home printing, stereolithography, the Formlabs folks have created a usable, fun, and surprisingly versatile home 3D printer that produces pro-quality pats. Now that printer has gotten better.

First, a bit of explanation that I added to my original Form 1 review. The $3,299 Form 1+ is a stereolithography machine and not a fused deposition modeling (FDM) machine and this is an important distinction to make. We are probably all familiar with machines like the Makerbot. These machines use FDM to extrude a small bead of metal or plastic to “draw” one slice of the shape you’re building over and over again until the object is built.

The Form 1+ shines a laser onto a metal surface through a layer of resin. Using a process of photopolymerization, the slices are laid down one after the other creating a solid object that lifts out of the resin as it is built. Think of the Makerbot as a stalagmite maker — the material is laid down on a platform — while the Form 1 is a stalactite maker where the object hangs from the platform that slowly moves up.

Because we are using laser light to “draw” each later, the details can be as fine as 300 microns and layers are as thin as 25 microns. The Makerbot maxes out at 100 microns. In actual quality this means that Form 1+ objects are perfectly smooth, like injection molded objects. FDM objects are terraced with little lines where each layer was laid down. While both methods are excellent for prototyping, the Form 1+ is slightly better for smooth mold-making and for getting a finer, more detailed final product. Think of it as a Rolls Royce vs. a Dodge Viper. Both of them get you there but Formlabs is focused on quality while FDM printers are focused on Viper-like speed.

The new model, called the Form 1+, looks almost exactly like the original Form 1. It is a brushed metal beauty, a piece of art that looks great on the desk, and the machinery is completely hidden inside the bottom case. An orange hood covers a tray of resin and a build plate, and the machine is quiet (not silent) and has a footprint of about one square foot. It looks like a 3D printer is supposed to look, that is to say very much like something out of Star Trek.

How does it perform? As you’ll recall, the original Form 1 took about four hours to print a test model, a stylized rook with a hollow core and clever winding staircase. The new model could print the same thing in about two hours, a considerable difference.

I’m also impressed with the improvement in quality. Because of an improved laser and mirror system, the prints have finer details and better integrity. The new test model they offer, the Twisted Rook, offers some amazing little details including raised lettering on the top and clever textural tricks. And, like the original Form 1, the printed pieces look – and are – completely solid. Below you can see the original rook print on the Form 1 (next to a Makerbot print) and next you see the Twisted Rook on the Form 1+. 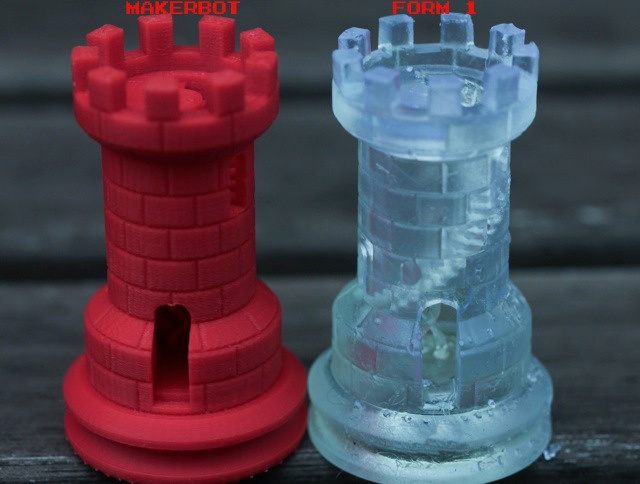 Also improved is the support system used by Formlabs’ software, PreForm. The software now uses far less material to produce the necessary struts and supports and the points of contact with the models are much smaller. Whereas I had to cut off the supports on Form 1 prints, Form 1+ supports just snap off.

Now for the bad news. The resin Formlabs uses – which comes in clear, black, and gray – is messy stuff. The printed object rises from a tub of resin like the Swamp Thing and is usually covered in it when you pull it off the base using a scraper. This means you should wear gloves at all times while handling the uncured model. Then, after bathing the object in alcohol for 10w minutes you have to pull it out for another alcohol bath. This is definitely not a printer for grade schoolers and things can get messy fast for users who aren’t careful.

That, in short, is the primary issue with SLA. It’s an amazing technology but it’s still messy. Whereas FDM is a straightforward process – print, pull off, rejoice – the Form 1+ adds a few steps. This is by no means a deal breaker, just a consideration. For example, you might want a separate, clear worktable to manage your SLA prints, whereas FDM machines just need the space on which they sit.

The printer also requires a light touch. Because of the unique nature of SLA printing you’ll find that sometimes the prints should be produced diagonally and held up by supports and at other times directly on the build plate. The new software reduces many of these questions but it can be frustrating to have a long print fail because of minor glitches during printing.

I have performed a number of test prints using this device including a difficult “hole and peg” test that came out a mess. I can’t fault the printer, however, because with a bit of tweaking I’m sure they’d work. Be aware of this before embarking on your prints and you’ll be fine.

Who is this for? It’s for designers and engineers who want to build a cohesive plastic part without much fuss. It is not a large format printer – it makes things about 4.9×4.9×6.5 inches – but the things it makes are amazing.

Despite the issues I have curing the SLA, however, the Form 1+ is the way to go if you’re looking to move up from FDM. The quality is peerless and the print time is vastly improved. It is a designer’s dream machine, a device that can produce objects in full resolution and in surprising detail. At $3,299 it is very expensive. This is not a hobbyist’s printer. And, because the resin isn’t rated for lost wax casting, the utility beyond prototyping is limited. However, if you want a perfect product, perfectly printed, this is the way to go.