While I hate the word “phablet,” there’s no denying that it’s helpful to have a term for what is becoming a unique category, separate from the smartphones and tablets that came before them. Not always the most convenient in one hand on the go and not as suited to content consumption as a tablet when at home, bigger phones have their own niche that appeals to users who demand big screens and longer battery life.

With the iPhone 6 Plus, Apple has stepped into the category by scaling the hardware of the 6 up while (in some ways) scaling the software from the iPad down. The result is a device that you can use all day to do some of the quick tasks we always do on our phones while also consuming media as you would on a tablet: traditionally, in landscape, held in two hands or propped up against something.

Among the many things we use our phones for nowadays, one activity that fits particularly well with the way you use the iPhone 6 Plus is gaming. When it comes to one-handed use, many games that are played in the portrait orientation either place touch targets near the center of the screen or rely on taps and swipes without regard for where you touch — think swiping around the change “lanes” in an endless runner like Temple Run.

While the 6 Plus is often criticized for requiring two hands in order to feel like you’ve got a good grip on the thing, gamers are used to holding something with roughly the same weight and dimensions for hours at a time: console controllers and handheld game systems like the PlayStation Vita.

The iPhone 6 Plus next to a Playstation Vita pic.twitter.com/Q5LLR4xkks

The iPhone 6 Plus is far more comfortable to hold for hours at a time than either the Sony’s Vita or the Nintendo 3DS — it’s lighter, made out of nicer materials, and its curved edges feel better in the crooks of your hand.

Its size also plays up the strengths of non-casual games designed for touch gameplay on an iPhone or iPad, like Giant Spacekat’s Revolution 60, which uses frequent Mass Effect-style prompts that affect the outcome of story sequences and quick-time events to keep you involved during cutscenes. On the smaller iPhones, I felt a little cramped under the pressure of having to swipe a specific pattern in a blink, while on the iPad I’m generally not a fan of playing with the tablet in my lap while I play with my index finger. On the iPhone 6 Plus, I felt like could comfortably get to everything with my thumbs with the same reaction time as if I were playing something on a controller. 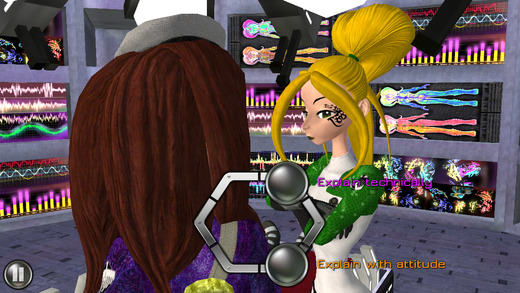 That’s not always the case, though. At home, I could play Revolution 60 and hear the story through the speakers without bothering anyone. But on the go, I need to wear headphones if I’m going to hear the game’s voice acting. Let me tell you: there’s a reason the PlayStation Vita and Nintendo 3DS have their headphone ports on the bottom of the device. It’s really annoying to have your headphone cord get in the way of your grip on the iPhone. This was true with older models, but considering I’ve found myself playing games more often since getting the 6 Plus, it’s more noticeable than ever.

Still, not all games require you to play while holding the phone in your hands. If you get ahold of an MFi (made for iPhone) controller, there are quite a few titles that let you play using a more traditional setup with actual analog sticks, face buttons, and triggers. In a game like Bastion, which has twitchy action and awesome narration, it’s difficult to get across just how much better the experience is when playing with headphones and an external controller. That, and packing a cheap controller into your bag that takes up less space than a dedicated handheld console is way more convenient when traveling. 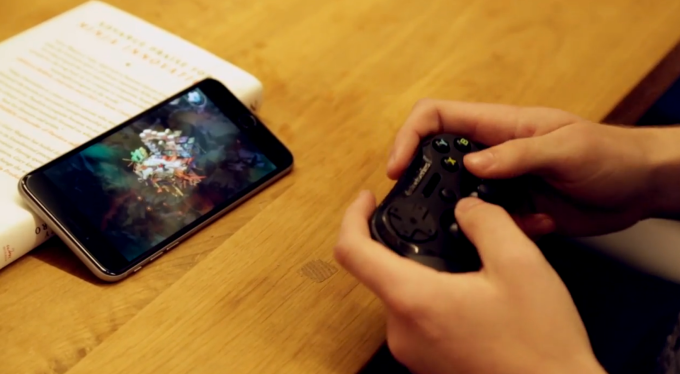 Beyond the ergonomic advantages that come with the 6 Plus’s size when gaming, screen quality and battery life do a lot to make gaming on the device feel like less of a compromise compared to a dedicated handheld console. Simply put, its 1080p “Retina HD” screen is a step above what you find on the Vita and leagues ahead of what you find on the 3DS. As game developers figure out how to take advantage of Metal, Apple’s new framework for tapping into the iPhone’s graphics hardware, games on the iPhone 6 Plus and its plus-sized successors will likely surprise casual gamers with their flashy shading and particle effects.

While the 6 Plus’s battery life has gotten a lot of acclaim when compared to previous models of the iPhone, it’s even more impressive when compared to its handheld gaming rivals despite the fact that they have more room to squeeze in big batteries and don’t sport cellular connectivity. While a Vita or 3DS might last 5 hours on a charge when playing games that tax their hardware, the 6 Plus is an absolute beast, handling multiple hours-long sessions playing a variety of graphically-intense games. It’s nice to know that you can get to an airport in the late morning, play games all day as you fly across the country, and still have enough juice to get you through the evening, all on one device.

Unless you simply must have access to Sony and Nintendo’s exclusive games, it’s not hard to imagine shifting all of your “hardcore” handheld gaming over to the 6 Plus. As time goes by, those in the Applesphere will discover the advantages of bigger phones and game developers will take advantage of the fact that the tools they use also work on the iPhone; it will be interesting to see whether gamers will be willing to pay premium prices for gaming experiences that mirror what they’d get on dedicated consoles. That doesn’t seem to be the case on Android phablets, where users tend to be less willing to pay for things in general. On the 6 Plus, which users are already paying a pretty hefty premium to get, it seems plausible that high-end smartphone gaming could finally get some real attention from consumers.