Internet speeds, fuelled by the growth of cellular networks and low-cost smartphones and tablets, are on the rise, and this last quarter the world finally reached a tipping point. Globally, we have finally passed average connection speeds of 4 megabits per second — the threshold for global “broadband” connectivity. The figures come from Akamai, which provides quarterly updates on connection speeds and security in its State of the Internet report.

At the same time, it appears that at least one of the biggest types of internet threat traffic is on the decline: distributed denial of service attacks are down by 15% compared to a year ago.

Connection speeds are not only growing, but they are accelerating: as a point of comparison, it was only a year ago that just half the world’s Internet connections were exceeding 4 Mbps. In the last quarter they have gone up by 21% and are now at 4.6 Mbps, working out to a year-on-year rise of over40%.

It’s a small but significant milestone in global broadband connectivity. Four Mbps may not sound like much to people in some places — in the U.S., for example, states like Washington and Delaware are seeing peak speeds of over 50 Mbps — and in some countries, like Brazil, the average isn’t even yet past 3 Mbps. But it is a sign that things are gradually improving overall. Those are statistics that will have an impact on the kinds of services that can be developed for consumers and businesses everywhere.

Some other notable highlights from the report:

South Korea remains the world’s fastest country when it comes to mobile broadband. Its average mobile connection speed is now at 15.2 Mbps, while another Asian country — Vietnam — took the slowest spot of the 56 countries surveyed, with 0.9 Mbps. (This, of course, excludes a swathe of countries that didn’t even make the list.) Australia took the top spot for peak connections on mobile at 108 Mbps.

At the same time, it’s worth remembering that this data growth comes as voice growth has all but stalled, a trend made starkly clear by this usage graphic: 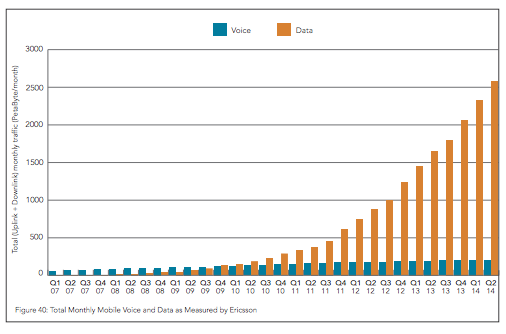 Interestingly, while Android-based phones have by far overtaken other platforms when it comes to device sales, when it comes to using a smartphone for data services, iOS continues to come out on top. Mobile Safari, Apple’s default browser, is currently the clear leader as the most popular browser when looking across both cellular and on non-cellular networks (for example using a device over a WiFi network). 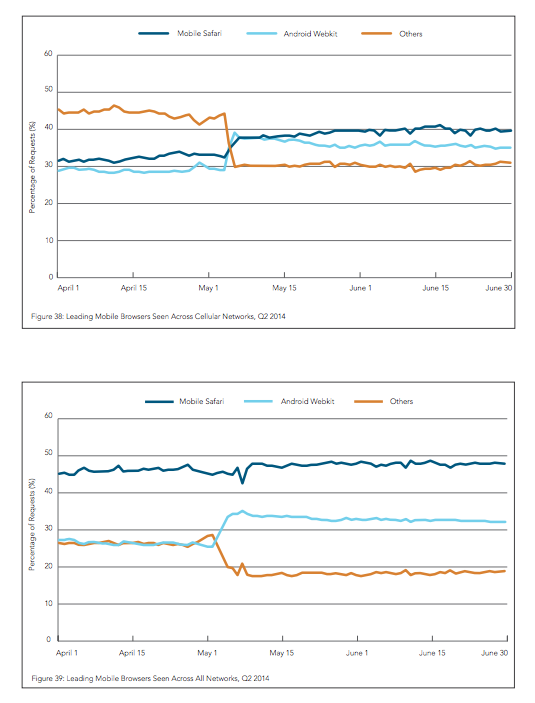 These kinds of usage patterns underscore one of the reasons why developers and carriers continue to hold iOS and iPhone handsets as a top priority in their own roadmaps.

Although we continue to hear about security breaches both for specific companies and vulnerabilities for specific operating systems, it appears that there are some positive trends in the area of global attack traffic.

Akamai says that the number of unique countries and regions where attack traffic originates from has gone down, and is now at 161 regions (down by 33 compared to the first quarter of this year). There appears to be a concentrating trend underway: China kept its spot as the biggest originator of traffic, now up to 43% of all attacks, and Indonesia, at number two, doubled its attack volume, and is now at 15% of all attacks.

Although Asia accounted for 70% of all attack traffic, it’s not the only region responsible: the U.S. was in at number three with 13% of all attacks (and also rising versus last quarter). “The composition of the top 10 countries/regions remained the same from quarter to quarter, but the group was responsible for a greater portion of observed attack traffic: 84% as opposed to 75% last quarter,” David Belson of Akamai writes..

Attack traffic concentration across the top 10 targeted ports increased quarter-over-quarter to 71% from 55%, Akamai notes. “For only the third time in the history of the report, Port 445 (Microsoft-DS) fell to the second-most targeted by attackers. Port 80 (WWW/HTTP) took the lead in the second quarter when its attack traffic nearly doubled to 15% but, interestingly, was not the most targeted port among any of the top 10 countries/regions,” Belson notes.

DDoS traffic, interestingly, is also on the decline, with 270 DDoS attacks reported among Akamai’s customers in the second quarter, down from 283 in the first quarter. This makes it the second consecutive quarter with a decline and a drop of 15% year over year, Akamai notes.

“For the first time since Akamai began tracking repeated attacks against targets, the number of customers that saw subsequent attacks declined from one in four (26%) to nearly one in six (18%). Only two customers were targeted by DDoS attacks more than five times, with one customer seeing as many as seven total attacks, as opposed to the high of 17 attacks the previous quarter,” the company says.

In terms of the regions seeing DDoS attacks, and what kinds of companies are getting targeted, the trends are not changing much: the Americas, led by the U.S., gets the most attention, as do e-commerce and enterprise sites. This should come as no surprise: attacks follow the money. 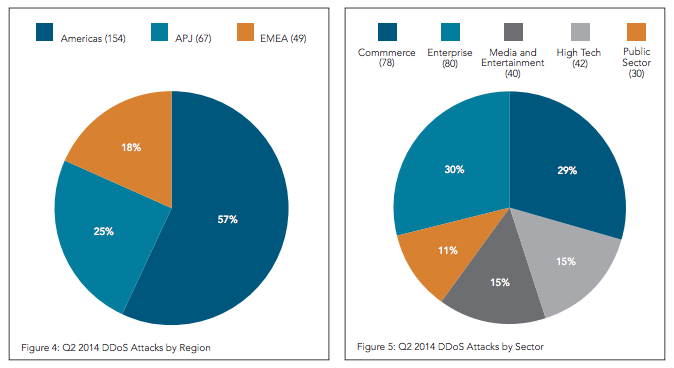 Akamai says that Q2, the period covered in this report, was the first time that it has seen a decline of IPv4 addresses connected to its platform. The number totalled 788 million from 238 unique countries and regions — down 0.9% compared to last quarter, although up by 4.8% on a year ago. Why the change? Growing IPv6 connectivity may be some of the reason.

“Though even a minimal quarter-to-quarter decline is unusual in the history of this report, we see no reason for concern,” writes Belson. “It may be due to providers working to conserve limited IPv4 address space, or likely was a result of increased IPv6 connectivity and adoption among leading network providers. That said, globally, 69% of countries and regions still showed year-over-year increases in unique IPv4 address counts.”

In terms of IPv6, the largest number of requests continued to come from cable and mobile providers. Verizon Wireless took the lead here, with 50% of its requests to Akamai coming over IPv6, the company says. Four other providers, Telenet, Brutele, Kabel Deutschland and XS4ALL also had more than one-third of their requests over IPv6 — a mark of how European countries are still leading in IPv6 adoption.