Meet SAM, a wireless electronics kit that’s aiming to make it easier for kids or indeed anyone with an idea for a connected project to get building — using a series of Bluetooth connected pieces and a drag and drop software interface for linking the hardware together.

And also easier to integrate connected objects with other digital apps and services, like social networks or email — so you could, for instance, build a real-world connected object using SAM that notifies you when you get an email from a particular contact. Or link your small business’ Facebook like button to an LED interface that flashes every time you get a new like.

Kids today are getting pretty spoiled for choice when it comes to cutting their teeth learning to code and/or hacking around with bits of hardware designed for the purpose of play. Only this weekend Kano shipped its first batch of coding kits, which combine the Raspberry Pi microcomputer with a software layer atop Linux specially designed for learning coding. There’s also electronics hobby kits like LittleBits. And various modular robotics projects, like MOSS and Cubelets.

On the developer side, there are long-standing but more difficult to use hardware offerings like Arduino, which generally require soldiering and grappling with complex programming interfaces. But more recently hardware kits that aim to break down some of this complexity have been cropping up — targeting developers who are more comfortable building software than hardware, such as relayr’s WunderBar or the health- and fitness-focused BITalino.

SAM is aiming to sit in between these efforts, with a kit that anyone can use — so not just developers, but kids or students or designers or other non-engineers  — yet which supports enough complexity so that it’s more than a child’s toy.

So that means SAM has a strong focus on software — as well as offering a smorgasbord of easy to use wireless hardware modules (including motors, sliders, LEDs, various sensors and so on).

“What we think is hardware is an amazing gateway to software,” co-founder Joachim Horn tells TechCrunch. “Hardware can have wonderful impacts if only you have a simple enough software to control it… Our software is truly special.”

The companion SAM App is a flow-based programming interface that links to the hardware via drag and drop software modules, which display automatically generated code, as the virtual blocks are connected to each other. 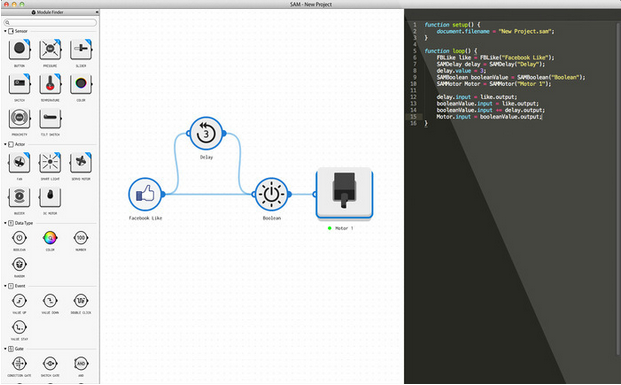 This software — and the complexity it supports — is one of the differences between SAM and extant electronics kit offerings like LittleBits, says Horn. So while the user can start simple with SAM, they can also step up the complexity level of their projects over time as they gain confidence. The SAM companion software is free.

“I have a few LittleBits pieces, and I had a lot of fun with it alone and also with my little cousin, but as soon as I wanted to build something more robust, something more flexible, either the joints would snap — because they’re magnetic… [Or] as soon as I wanted to build more complex systems, logic gates and everything, I had to buy more and more modules,” he says.

“It’s all wireless, it’s flexible, and we believe it’s a more robust and supportive experience,” Horn adds. “The vision is to simplify the underlying use of technology.”

SAM is still mostly vision at this point, with the London-based startup behind it launching the project today on Kickstarter with the aim of raising £50,000 to fund the first production run of their modular kits.

The multidisciplinary team behind SAM is made up of engineers and designers, and has been bootstrapping the product development up to this point, although they are currently based out of a Microsoft Ventures’ co-working space (but Microsoft is not an investor, confirms Horn).

Price wise, SAM’s modular kits start at £45 ($73) to early Kickstarter backers, for three wireless modules and the companion app, rising to £400  ($650) or more for a Family kit with multiple basic modules and more sophisticated ones such as a temperature sensor, light sensor and cloud module. The estimated shipping date for kits is next March.

In addition to hardware revenues from selling SAM modules, Horn says the longer term business model here will likely focus on developing a subscription service for the SAM App for advanced versions for developers wanting to create more complex systems.

But the basic app for general users will remain free — and may be open sourced in time, if that’s compatible with building a business. The SAM hardware kit schematics and board designs will definitely be open sourced.