A new feature in Apple’s App Store for iOS 8 is a search section which displays “trending” searches below the search box – an area meant to highlight the popular apps of the moment. However, from an analysis of the apps which have been appearing on this page since its public debut, it seems some app publishers have already figured out how to game the system for their own ends.

To be clear, we can only put forward speculation at this point, based on some odd behavior and sightings which seem to point towards evidence of publishers abusing this feature. But at this point, there’s nothing conclusive we can demonstrate in order to prove anything beyond a shadow of the doubt. (That may be difficult to ever do, though. For example, “proof” of app developers gaming the App Store’s charts is typically seen in odd spikes of download activity – in other words, the proof is in the pudding, as they say.)

For starters, and something which you may have also noticed as you hopped into this section since iOS 8’s launch earlier this month, is that the trending searches are often one-to-one matches with apps in the App Store. In other words, there tend to be more proper app names featured here than generic search terms – things like “free game” or “keyboard app,” for instance.

Of course, you might assume that Apple is simply curating this section to remove generic search terms. But is it? At times, generic terms do make the list, as “gif keyboard” did recently (see below). Our understanding is that “Trending Searches” is not editorially driven at all.

Another oddity, and one that’s more damning, is that, on any given day, at least one or two of the apps on the “trending searches” page are not in the top-ranked list of popular apps. If the list of trending apps is meant to better reflect what people are searching for right now (i.e., because certain apps are going viral), you would expect to see those popular apps’ names appear in the trending list and the top charts at the same time or soon after.

But instead, many of the apps that get featured here are actually quite small and kind of random – something that makes you wonder how they would have ever seen enough users performing searches to get them into this highly visible spot. They would have needed either Apple’s editorial input or they’ve gamed the system.

Even if “Trending” is meant to surface the next big app trend before it hits the charts, it’s curious that some of those apps it surfaces would have ever made the cut through organic traffic alone. 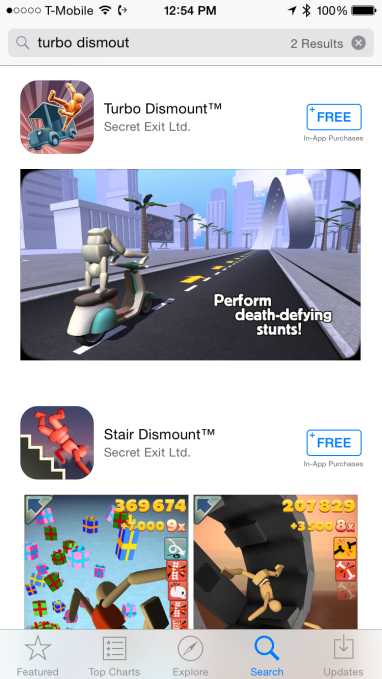 To illustrate some of the questionable finds, Jai Jaisimha, CEO at Appnique, shared with us screenshots of App Store trends over the course of many days.

One weird and somewhat obvious example of what appears to be an attempt at gaming the system stands out: a search for the keywords “turbo dismout.” That’s a deliberate misspelling of the app’s name, “Turbo Dismount,” which indicates this is not coming from organic search behavior, but rather a targeted campaign of some sort (an ad campaign targeting search results pages instead of the App Store app, perhaps, or bots).

We suppose they could have targeted the keywords “turbo dismount” but wanted to be absolutely sure no competing app with similar keywords could steal their thunder. That’s probably why they went with the misspelled variation.

Appnique’s App Store data and keyword database shows that both apps that use the hidden keyword “dismout” are made by the same publisher, and only one app uses the same combination of keywords in its hidden keyword list, explains Jaisimha.

This particular example was easier to catch because of the misspelling, but it could still be an artifact of how the algorithm works. Still, if you’ve been looking through the “trends” list from time since iOS 8’s debut, you’ve probably noticed dozens of questionable titles – apps you’ve never heard of, with no media coverage, that have low rankings and few reviews. How on earth did they become trending? 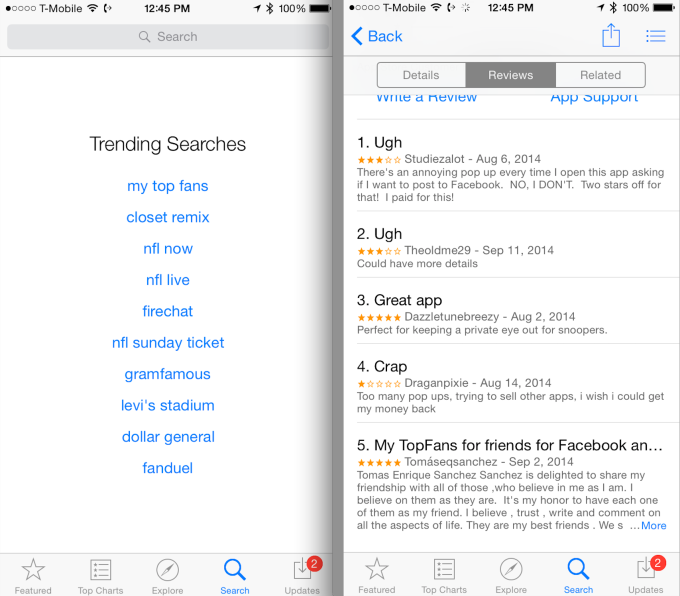 Almost every time you go to look at this section, there’s at least one app that seems questionable.

For instance, at the time of writing today, I found the trending section currently features a number of what seem to be legitimate searches, including those for NFL apps (Sunday Night football!) and an app called FireChat which is being adopted by users in droves during the Hong Kong protests. But how did MyTopFans get in there – an app with only 12 reviews (paid) and 19 (free)? The first review is even titled “Ugh” and complains about pop-ups, while another is titled “Crap” and calls it out as “trying to sell other apps.”

Gaming Seems To Work, But The Payoff Varies

What’s worse is that this technique seems to work. MyTopFans couldn’t even break into the top 500 in U.S. Entertainment category before being featured here. Today, it’s top 23 in Social Networking.

(Note that apps may not be gaming the Trending section directly, but could be buying downloads for the purposes of moving up the charts and landing on the Trending page was a byproduct of those actions.)

But the good news is that the jump from “trending” still appears to be small in other cases. For instance, Quizlet, a flashcards and study tools app, has been doing well on its own now that school has started back, and showed no noticeable “bump” in downloads on App Annie’s charts due to being featured in the App Store trends section on September 23rd. (Jaisimha did find it got a boost in reviews, though. It received 6 reviews the day it was trending, while its top two competitors saw none.)

It’s likely that publishers who are attempting to game the system are still just in an experimentation phase today. They’re testing the waters to see what works, and determining whether’s its worth the effort. If the impacts on the App Store charts continue to be inconsequential, there’s hope they will eventually just move on from these gaming attempts, allowing trends to remain organic.