Over the past two years, a startup called Circa has tried to re-imagine how users get and consume their news in today’s mobile, on-the-go age. It’s worked toward that goal by providing readers short, easily digestible snippets of news stories that can be read in minutes and are updated with new information over time.

Today, Circa is making it easier for news buffs to get the most important news of the day, while also being able to drill down into the topics and stories they most care about. For version 3 of its app, the company is adding a new feature called ‘Wire,’ which provides a rundown of the day’s biggest news, along with updates to stories that readers have subscribed to.

Each day in Wire users will get a Daily Brief, which is a collection of 10 to 20 of its editors’ top stories from the previous 24 hours. Users can set whatever time they want the brief to be updated, but stories are updated as information comes in, so that users get only the most important and up-to-date news when they check it.

In addition to the Daily Brief, Circa’s Wire section also includes updates to stories that its readers have chosen to follow. Because Circa’s stories are dynamically update to provide more information as it becomes available, readers previously had a queue of updates to news they were interested in.

The new version of the app makes that a bit easier to navigate by providing a feed of story updates, or what Circa co-founder Matt Galligan calls an “inbox of news,” rather than having to sort through a list of stories they had already read pieces of.

Galligan says the company built Wire over the better part of the year, figuring out not just how the stories would appear to users, but also updating its CMS and editorial workflow to make the new feature work. The startup has about a dozen editors around the globe who work collaboratively to make sure news is up to date.

With the newest version of the app, Circa is working to make its news more personalized. One way it’s doing that is by adding search, which was the app’s most requested feature in previous versions. By doing so, its readers will be able to find news based on keywords and follow stories and topics that most interest them. 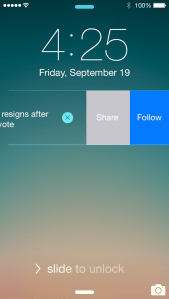 While the Circa is being updated for both Android and iOS, the release of iOS 8 gives it a series of new features for that mobile operating system. One example is interactive notifications, which will allow users to follow a story directly from a breaking news alert push notification. Another is the ability to share through a number of new extensions from third-party mobile apps.

It’s also providing more granular controls to users about the type of stories they will get notified about. Circa was already pretty stingy about which news stories it sent push notifications for, but now users can decide which categories they want updates about. If you don’t care about sports, you can deselect that category and you’ll never be notified about which team won the Super Bowl ever again. The same could be true for celebrity or business news, if those don’t appeal to you.

For Galligan, the importance of sending push notifications only for the most relevant information can’t be overstated. “When Circa sends a push, I know that it’s news and it matters,” he said. “We are known for our pushes and the quality of our pushes.”

Considering the number of notifications users receive from random apps throughout the day, hopefully Circa will stay true to that goal.