Tiggly, an educational app designed for iPad’s youngest users – babies! (oh, and toddlers, too) – has raised a Series A round of funding led by Habermaass GmbH, a Germany-based early play and learning company, and owners of the toy brand HABA, which is now entering the U.S. edtech market. Though the startup won’t disclose the size of the round, it had previously raised $1 million in seed funding from May 2013 to January 2014, and the additional funding now brings its total raised to $5 million. So you can do the math.

As a parent myself, I know from personal experience the draw that mobile apps have for ever-younger users. Though I worked to limit technology’s use when my daughter was small (no baby chairs with iPad holders were in my home!), I did let her “fingerpaint” on iPad before she turned one, and introduced a small selection of educationally focused toddler apps as she grew older.

Tiggly was one of these.

The app is part of a $29.95 kit that includes four brightly colored geometric shapes (a square, circle, triangle, and star) which, when placed on the screen in position, transform into cute characters, like jungle animals, for example, or can be used in a variety of other games as stamps or drawing tools. The games are meant to encourage language development, creativity, spatial thinking and motor skills. They are like the iGeneration’s version of wooden blocks, perhaps. 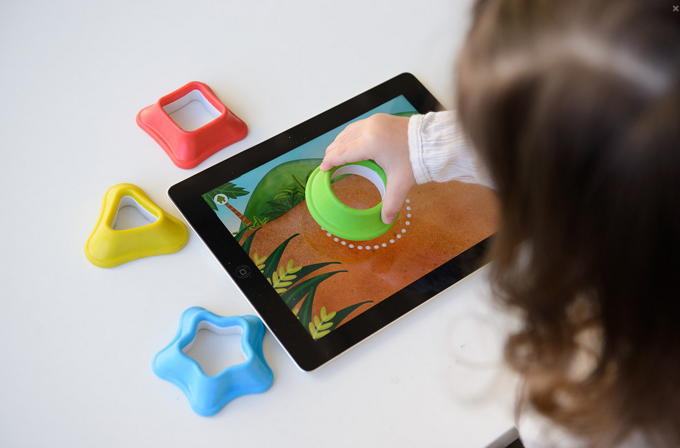 Since launching in October 2013, Tiggly’s apps have been played over 400,000 times, and its “Tiggly Shapes” are now available in over 20 countries, across five continents and come in eight languages. The company says feedback has been positive so far, citing a 4.5 out of 5 rating on Amazon.com after 50 reviews. (The company declined to detail user numbers, sales or revenue.)

Explains founder Phyl Georgiou, Tiggly’s products are resonating with customers who are looking for “more wholesome” experiences on tablets for their children.

“This funding will help us expand our product line and provide more learning opportunities for preschoolers and kindergarteners who love apps,” he tells TechCrunch. “We decided to raise money from Habermaass because they have a 75-year track record of making learning toys that children cherish. Having a strategic partner like Habermaass will greatly enhance our distribution network and give us access to industry knowledge and contacts that will help us scale rapidly.”

Georgiou notes that the company had interest from traditional VCs, but chose Habermaas because of their experience in the toy and learning market. Habermaass GmbH, which makes €365 million annually, is based in Bad Rodach, Germany, and includes the brands HABA, Wehfritz and Jako-O. Its toys and games focus on high educational value and high quality design, but HABA brand is the most relevant to Tiggly, as it’s the toymaker for kids 0 to 6.

The additional capital will help the small startup grow its team from 6 to 12 people, expanding mainly its app and design team.

“In particular, we are investing heavily in building an engaging world where children can learn while having fun,” the founder says. The longer-term goal, he adds, is to offer educational products for those aged 18 months to six years old, including an expanded curriculum that covers other areas like numeracy and literacy.

“We believe there are a number of important early childhood development milestones that are best reached through the engaging gameplay we are pioneering, and this funding will help us fast track these products to the market,” says Georgiou.