Telenav’s name tends to be associated with mapping and personal navigation, but today the company is trying its hand at something a little more social with the launch of an iPhone app that lets you see what your friends are up to, and if they’re nearby. The app is called HopOver, as it allows you to invite friends to join you and hang out by creating a “Hop” – aka an event or invitation.

The app sounds a lot like Foursquare’s newer app Swarm, in fact, which is designed to help you serendipitously connect with friends when you’re in close proximity to each other, view nearby plans and message with friends to coordinate your meetup.

Telenav says the app is aimed at the college-aged crowd in particular, which differentiates it a bit from Foursquare’s broader effort to spin out its flagship app’s social features into Swarm, then leverage the data Swarm generates – like photos and check-ins – to fill out Foursquare profiles. 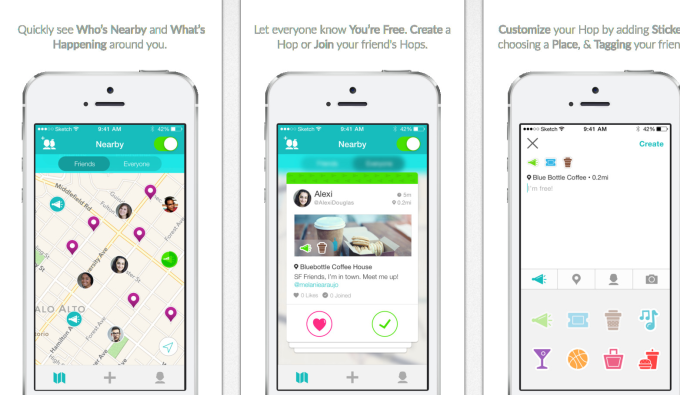 What’s interesting is that despite its attempt at practically cloning the Foursquare Swarm app’s concept, HopOver is actually leveraging Foursquare’s content for its place data.

HopOver also lets you tag your friends and add stickers to your Hop, as well as follow other people to find out more about their favorite places. A “home protection” option makes it easier to keep your home address from being shared.

The app borrows ideas about “ephemerality” from photo-sharing app Snapchat, as well, in that HopOver users’ locations will disappear after a short period of time. The Hops (events) you create in HopOver will only show up on the map for an hour, and then they’re gone for good.

The idea, the company explains to TechCrunch, is to help create meetups with friends right now instead of in the future, as well as see what friends are doing right now. “It’s a little like Snapchat for places,” we’re told.

Unfortunately, for apps like HopOver – or Foursquare’s Swarm, for that matter – the only way to have a successful, useful application is to reach critical mass. Foursquare never quite made it all the way to mainstream adoption, compared with social rivals like Facebook and Twitter.  While Foursquare at least had a sizable user base to push toward Swarm, HopOver is starting from scratch in social, which could be a challenge going forward.

The new HopOver app is a free download here on iTunes.