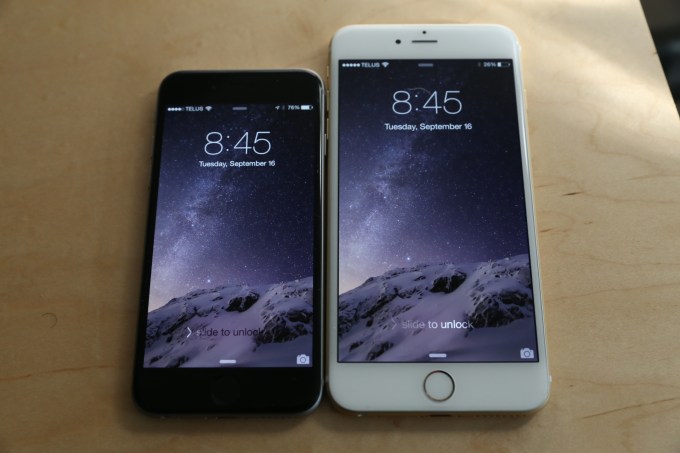 What’s going to sell better — the big ol’ iPhone 6, or the friggin’ huge iPhone 6 Plus?

The data is really, REALLY early (the phone has only been on the shelves for about 18 hours at this point, after all) — but so far, the 6 seems to be outpacing the 6 Plus by quite a bit.

That chart below comes from MixPanel, who is updating every hour. If you’re unfamiliar, MixPanel is sort of like Google Analytics for mobile apps and sites. Their SDK is in a good chunk of the apps in the App Store, providing insight for app developers and allowing MixPanel to peek at all sorts of fun aggregate data like how fast iOS 8 is being adopted and which of two just launched phones is seeing greator adoption.

While it’s not exactly the word of Cook, their data should be a pretty solid indicator for relative trends. 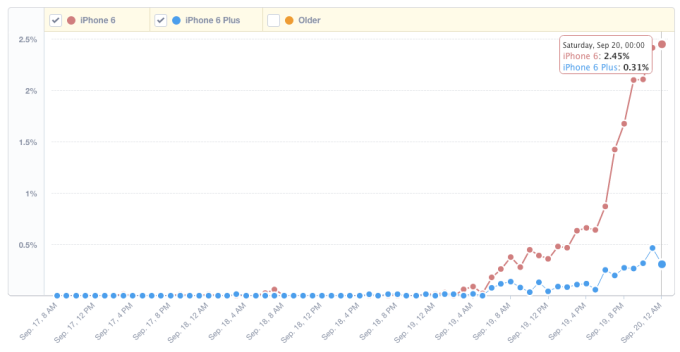 As of 4 PM Pacific, the iPhone 6 accounts for about 2.45% of the devices MixPanel is seeing in use. The iPhone 6 Plus, meanwhile, makes up just 0.31%. Everything else (that is, every previous generation of iPhone MixPanel still sees in the wild) makes up the other 97.24%.

It’ll be interesting to watch this graph over the next few days; on day one, at least, the margin between the two devices seems to just be getting bigger and bigger. Given that both devices are widely sold out, this could also imply that Apple made way more 6s than 6 Plus. If that’s the case, will the gap close as Apple becomes able to meet demand… or will most would-be 6 Plus owners have given in and bought a 6?