The iOS 8 installation spike is high, but lower than it was for iOS 7 last year, according to numbers from a variety of mobile OS usage monitoring platforms. Chitika, Tapjoy, Mixpanel and Appsee all show adoption numbers that, while high, fall short of the rocketing pick-up rate we saw when Apple launched its major visual overhaul of iOS just ahead of the iPhone 5s launch in 2013.

Mixpanel and Appsee’s live iOS 8 update tracker both show an adoption rate of between 16 and 17 percent, which represents the total percentage of users on iOS 8 that are running the apps which use their mobile analytics products. That’s about half the rate of adoption we saw after the first day last year, according to Mixpanel CEO Suhail Doshi, who said it was at around 38 percent after the first 24 hours for iOS 7.

Doshi suggests a couple of reasons for iOS 8 falling off pace compared to iOS 7, telling me that first, iOS 8 is “too big to [download] over the air — people have too many pictures,” and that second, “lots of companies are telling their employees not to update for a couple of days because of security holes found in previous years.” Many users took to Twitter to voice their disappointment that iOS 8 required so much space free on their devices prior to an update, and while a tethered update via the computer and iTunes eliminates this problem, it’s still an additional step that makes things more difficult than they were last year.

Still, Doshi points out that Android KitKat took nine months to attain 40 percent market share, so Apple’s rate of adoption is still incredibly fast by comparison. It’s likely the adoption will also grow as more people upgrade to iPhone 6 hardware, and we could be looking at a larger upgrade pool than usual this year, which means a lot of users potentially not bothering to update their older iPhone hardware before their new ones arrive. 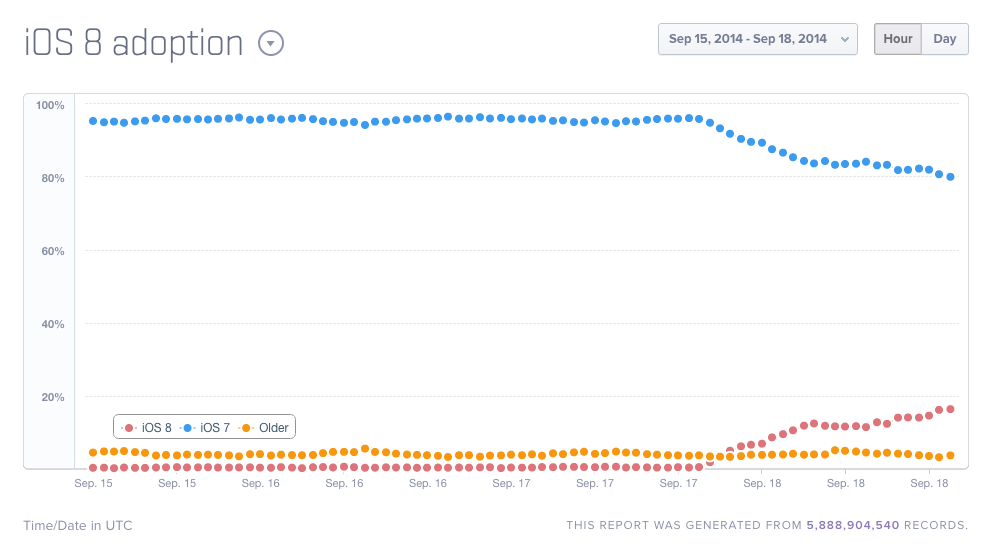 Tapjoy’s numbers show iOS 8 being adopted at a slower pace than both iOS 7 and iOS 6, based on its initial numbers, and Chitika has the percent of iOS-powered mobile devices on the new system at 7.3 precent, which is also under both previous generation devices. Another reason for the slower uptake that they suggest in their blog post is the fact that iOS 7 was a major visual overhaul with lots of new things for the end user, which probably drove a lot more early-adopter interest.