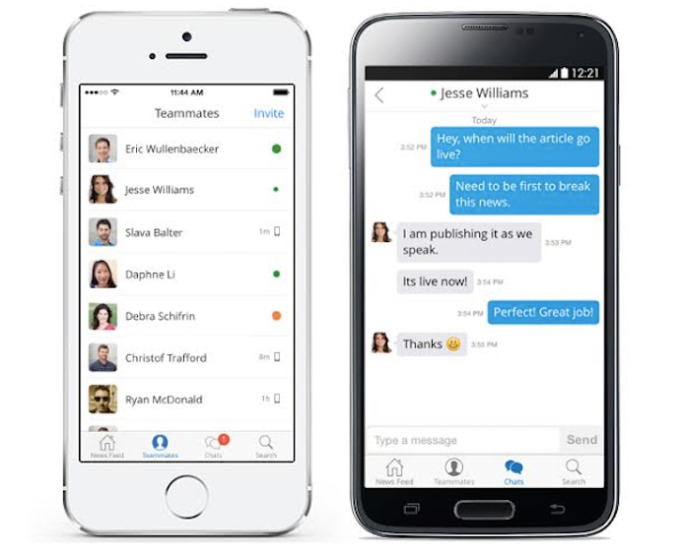 Enterprise social network Convo has finally brought chat from its desktop and web apps to mobile. Today, the company is rolling out a new version of its app for iOS and Android that significantly changes its look while bringing real-time chat to its users when they aren’t sitting at their desks.

Convo has tends to draw inspiration (to put it lightly) for its apps from whatever Facebook happens to be doing. That trend has held with this update — as you can see in the picture above, both the iOS and Android apps have been redesigned to look a lot like Facebook Messenger.

Creativity (or lack thereof) aside, the change is welcome. At TechCrunch we use Convo for communication, but the lack of chat on mobile leads us to use a combination of Skype and Gchat for real-time messaging. I’m not saying I can dump Skype completely now, but at the very least when I do get to use this I’ll prefer the experience (unlike Facebook, Convo managed to get its News Feed and chat functions into one app).

Functionally, the new Convo Chat is exactly what you would expect from an enterprise chat solution. The revamped solution is available on the web, desktop, and both major mobile platforms, and Convo promises that your messages will remain secure and that you can trust that messages sent from both desktop and mobile will show up in chat logs no matter which device you’re on — something Skype has painfully failed at for me in the past. It probably should have been a feature sooner — especially considering the fact that there was already Facebook-like chat on the desktop version for some time — but now that it’s here I’m looking forward to using it.