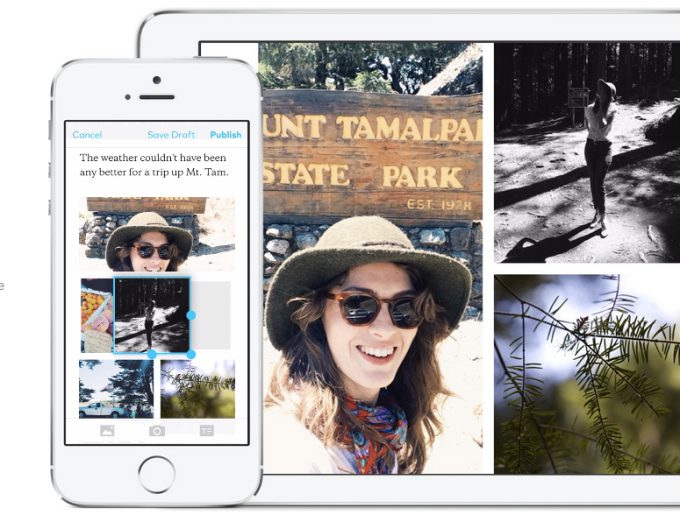 Storehouse, the 2014 Apple Design Award-winning long-form photo-sharing service from former Apple designer Mark Kawano, has launched its app for the iPhone. This comes almost four months after the startup raised $7 million in Series A funding from SherpaVentures and seed investors True Ventures, Lerer Ventures and Designer Fund in order to expand their reach beyond the iPad.

Thankfully, the jump from the iPad to the smaller form factor of the iPhone doesn’t lead to a cramped experience. The main screen is like a stripped-down, clean version of the news streams in most social apps today: an infinitely scrolling list of stories presented with a large photo (or video) with overlaid text.

People tend to use Storehouse as a storytelling platform, so you’re not going to see short gag videos or long, self-contained videos as you would on other social platforms. Instead, stories tend to use a mix of photos, text and 30-second videos to tell the story of an event or trip to a particular location. With Storehouse’s focus on creating layouts with simple gestures and smart automatic layouts, it’s totally possible to create a story that looks great on a phone, tablet or web browser: 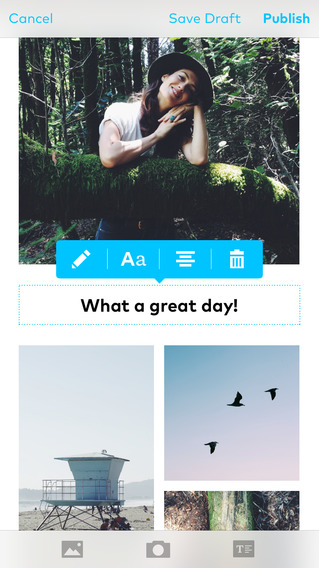 Launching Storehouse on the iPhone at the same time as iOS 8 comes with some small but appreciable benefits. Often, the kinds of stories that would be fun to build in the app don’t happen in situations where you can plan out how you want to capture it — for instance, a day at Disney with the family. In those situations, if you’re taking photos it’s probably happening with quick shots taken by accessing the camera from the lock screen when it’s most convenient.

Instead of moving those photos over to the cloud to create a story on your iPad, you can now simply go to the iPhone camera roll, select the pics that best captured the moments you want in your story, and send them directly to a new draft in Storehouse via an extension accessible from the Photos share sheet.

This Storehouse post by Om Malik from the Apple Watch event shows the power that comes with the platform’s simplicity. The post looks far better than most coverage from actual tech blogs that attended, yet required very little effort in terms of photo- or video-editing, and uses so little text that it wouldn’t be difficult to compose the entire thing right from a mobile device. It’s clearly not perfect for short, newsy text posts, but for stories where the interesting bits can be delivered through visuals, the only service I can think of that comes close for packaging context in a unique way is the Google+ Photo service, which could be a bigger competitor if Google decides to separate it from the unpopular service.