Google bought Skybox Imaging for $500 million, and the micro-satellite company’s most recent mission was…to take photos of Burning Man. Skybox repeatedly flew its satellites over Burning Man to create GIFs of how the 70,000 person make-shift hippie city was assembled and then deconstructed over three weeks. For example, above you’ll see the whole city rise and fall, and below you can see the massive “Man” effigy being erected through August, and then the ashy debris on September 1st after it was burnt. 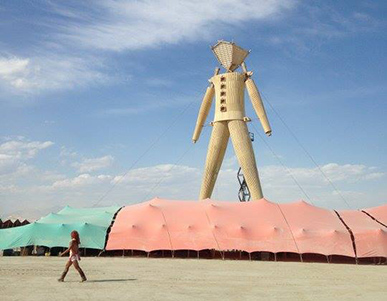 Jokes aside, the GIFs actually prove Skybox’s big advantage over other satellite companies. Since its micro-satellites are much smaller and therefore cheaper, so it can more of them up in space than companies building big, expensive, traditional satellites that power the infrequent updates to products like Google Maps. One of those might have missed the ephemeral Burning Man event entirely.

But since Skybox had both its SkySat-1 and SkySat-2 photographing the festival of expression, self-reliance, and gifting, it could get images every few days that really reveal how the whole city appears and disappears in under a month thanks to hardworking burners (and tech elites too) getting their hands dirty. Here’s how Burning Man Center Camp emerged from and returned to the dust.

Skybox’s site has a more GIFs and an interactive tools that lets you see what Burning Man looked like on a given day. At first glance it might seem frivolous or a bit worrisome in terms of its surveillance potential. But when applied to farming, disaster relief, or monitoring ecological issues, Skybox could use photos from space to make life better here on earth.

More on Burning Man from TechCrunch:

Tech Elites Aren’t Ruining Burning Man. They Get Their Hands Dirty, Too.