Fetch, a mobile app that serves as a personal buying assistant by allowing you to submit text or photos then have results returned to you by a professional shopper, is expanding beyond product search with a new release out now.

In the updated version, which also works over SMS, you can use your buying assistant to book flights, hotels, and rental cars, as well as buy movie tickets, event tickets, send flowers, pay parking tickets and more. In other words, Fetch is now an on-demand personal assistant, not just a shopping tool.

Where a virtual assistant like Siri or Google Now may be useful in setting calendar entries or getting directions, for example, Fetch allows you to ask for the kind of help you would otherwise use a personal assistant for – specifically, the mundane, but necessary tasks where some form of payment is involved. 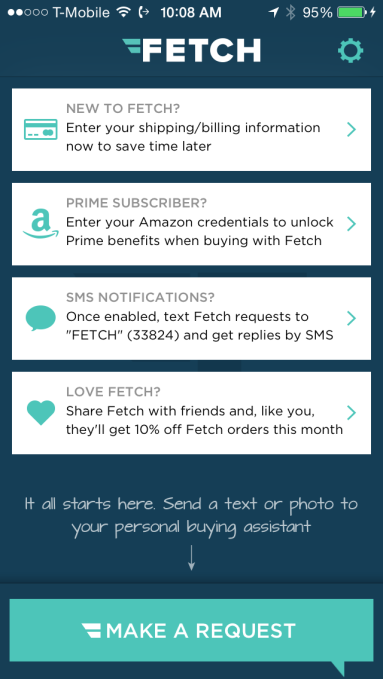 What’s nice about this app, despite its seemingly “1 percent-ish” inspiration, is that as a free service, it’s actually making the luxury of having a personal assistant something everyone can afford, whether you’re just a lowly college student who’d rather cram for exams than book your holiday travel, a stay-at-home mom busy chasing after small children, a lower-income worker who doesn’t have access to a personal computer at home but is in need of paying a parking ticket online, or anyone else who would wouldn’t normally think to hire an assistant to help you with everyday tasks.

You may remember Fetch from the Startup Battlefield at this year’s TechCrunch Disrupt NY. (They had the infamous presentation where founder and CEO Tom Hadfield took off his shirt on stage to make a point about how quickly Fetch was able to order him a new one, compared with Google Shopping Express. (Or something like that!)

Since that time, Fetch has remained in an invite-only beta with just 5,000 users until recently, but is already seeing around $25,000 per month in sales Hadfield says, and is growing at 30 percent month-over-month. Users are spending around $70 per order when using Fetch, which also helps you find the lowest price for the items you’re interested in by checking for coupon codes and other discounts.

In fact, the company is now guaranteeing the lowest price, noting that if you’re able to find it for less yourself, they’ll refund the difference. (This is likely a safe bet to make, since those who would use an app like this don’t have the time to comparison shop for themselves.) 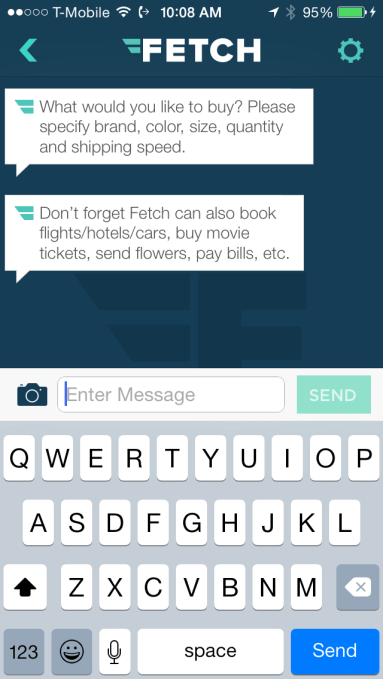 The Fetch app will respond to your request within one minute, then return the best price within 10 minutes. Besides simply placing an order, it can track price drops on your behalf, and it can even track down out-of-stock items, alerting you to when they return to inventory. (Ahem, iPhone 6 Plus, anyone?) Items can be ordered using your own credit card info, now processed through Stripe, or placed for you on Amazon, using your Amazon or Amazon Prime account information.

Items are not ordered until you approve, of course.

Fetch earns an affiliate commission from most retailers, which is how it’s able to generate revenue and keep the app free. However, an affiliate structure isn’t quite large enough to sustain this business indefinitely – which is why Fetch will introduce a premium subscription for heavy users later in the year.

For now, though, the focus is on the public release of the new app, and its broadened support for all the other many things a user might like to buy, but doesn’t have the time or inclination to shop for, including the above-mentioned travel bookings and movie/entertainment tickets, flowers and more. To kick-start things, the company is offering 10 percent discounts on orders throughout the month.

In addition to the updated app, Fetch now works over SMS, allowing you to send your requests to “FETCH” at 33824. You’ll then never need to open the app at all, unless you want to update your billing or shipping information, or browse through your order history.

The new app is live here on iTunes.