In what amounts to a “welcome” turned sputtering softball aimed at Apple’s broad side, the CEO of Guess Watches Cindy Livingston wrote an open letter to Apple while, at the same time, proclaiming her own interest in the smartwatch world. Guess, a fashion brand founded in the 1980s, is best known for dress watches known as “department store styles”: the kind of pieces available at jewelry counters in major department stores.

The most interesting news, to be sure, is Livingston’s announcement that Guess is partnering with Martian, a smartwatch brand that produced a number of unusual pieces but has thus far kept quiet about its reaction to the Apple Watch.

 LETTER TO CEO OF APPLE, FROM CEO OF GUESS WATCHESDear Mr. Cook:I wanted to write to you and welcome you to the Watch Industry and also offer my personal thanks to you.As one of the largest fashion watch brands in the world, we have been around for more than 30 years. In the early 80’s, there was really only SWATCH (the brand) and GUESS Watches. At that time, we had many critics who thought we were crazy. No one thought that anyone would want this new type of “novelty” timepiece. They believed that the only “real” alternatives were Swiss mechanicals or traditional quartz timepieces. Fortunately for us, consumers thought differently!

We are part of an old and proud industry. Every year we’ve experienced change in some way. Over these years, we have seen the introduction of quartz movements, the rise and fall of calculator watches, digitals, analogue-digitals and many many brands, both big and small. It seems that the test of time has shown that the wrist is an obvious place for both function and fashion.

Fast-forward to today and the world has changed. The proliferation of smartphones and the demand of consumers for round-the-clock connectivity have changed the way people access time. This has caused an understandable fear and challenge in our industry (even if no one likes to admit it).

We personally welcome this new challenge to remain relevant to our young, sexy and adventurous consumers who see as much importance in the device they carry and the messaging app they use, as the clothing and accessory brands they buy.

Over the past year, there has been dramatic speculation of the future of “wearables” and Apple’s entre into this segment. This week, you delivered! Just as we had in the early 80’s, there are naysayers and believers. I, for one, am a fan! Your innovation and attention to detail is spectacular.

In today’s connected world, consumers deserve the next level of combining fashion and function. We’ve always been much more than a watch. Now, we too are going to take that concept even further. As we look forward to the launch of our own connected timepiece for GUESS… “Powered by MARTIAN”, we’re happy to have another true brand innovator in our industry that confirms the wrist as the dominant place for self-expression.

Martian is part of the previous generation of LCD- and E-ink-based smart watches that are currently reworking their missions as the Apple Watch looms. Why Guess is partnering with them and not, say, Pebble or Metawatch, is the real question here but I suspect the addition of an analog face coupled with a small digital notifications window matches the Guess aesthetic.

While I suspect this was written in the tone of Apple’s “Seriously” ad published in the 1980s, I worry that the Martian platform will be sub par in the face of future contenders, a sobering consideration for the fashion brand. 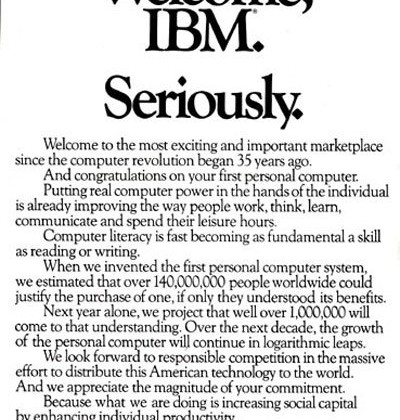