China Telecom has a new pre-order page up for the iPhone 6, despite the fact that it’s still not official, and likely won’t be until Apple’s big unveiling event on September 9. The website depicts high-quality renders of a new iPhone model as viewed from the side. The images are in line with what we’ve seen before, showing an iPhone with contours that resemble the iPad mini and iPad Air, but don’t go believing them to be the honest, authoritative last word.

The website also supposedly reveals some of the specs of the upcoming device, offering a reservation choice between 4.7-inch and 5.5-inch models, as well as touting a 3-megapixel front camera, improved Touch ID fingerprint reader, and a new quad-core A8 processor. The battery also gets a bump up to 2,100 mAh, a big bump from the roughly 1,560 mAh one in the current iPhone 5s. 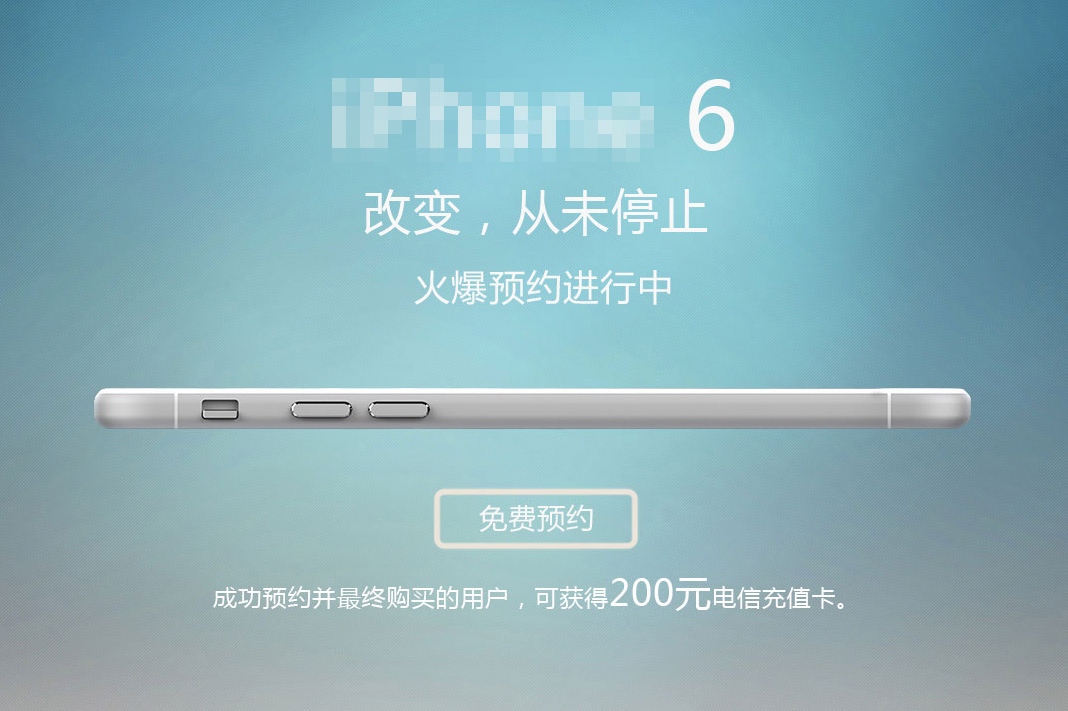 Originally, the site contained the word “iPhone” in plain sight, but China Telecom appears to have altered the graphic since this was first spotted by ZDNet earlier this morning to feature a pixelated (but still obvious) version of the word.

It’s very possible this is some kind of “wishful thinking” ad campaign undertaken by China Telecom. The company hyped pre-orders of the new iPhone 5s and iPhone 5c last year with images shared on social media, but the ones of the iPhone 5c turned out to be false, and while the one of the 5s looked accurate, that might have been no more than a lucky guess as opposed to special inside information.

China Telecom fuelling a hype cycle is in its interest, and the fact is that whatever Apple announces, those who sign up for its pre-order interest won’t be disappointed, so it’s free to make claims and educated guesses to add a little flash to what would otherwise be a “Sign up to find out more about Apple’s new stuff… whatever that is!” page with a single field and submit button.

Of course, they could be accurate in their predictions, as these aren’t too far-fetched compared to what we’ve been hearing from the rumor mill. As with every year, we’ll have to wait until Apple pulls back the curtain to know for sure.