Is privacy tech cool? UK menswear clothing brand The Affair reckons it’s spotted an opportunity to capitalize on our post-Snowden milieu, replete as it is with paranoia and mistrust about the electronic devices/surveillance tech we carry on our person, by adding a fabric Faraday cage into an Orwellian-inspired menswear line as a fashion statement.

It’s calling its signal shielding pocket — which is made with layers of metalized fabrics and designed to store and shield a phone, passport and contactless bank cards from prying eyes — an UnPocket. The company has launched a Kickstarter campaign looking for £25,000 in crowdfunding to bring the UnPocket and its companion menswear range to market.

“These Faraday pouches have been around for years in law enforcement forensics and what we’re both doing (along with plenty of other companies) is simply repurposing that tech for civilian use,” says The Affair’s co-founder Zoltan Csaki.

Most similar to the UnPocket is last year’s OFF Pocket, a privacy accessory crowdfunded via Kickstarter by the creator of the spy-drone blocking stealth hoodie. The Affair’s spin is to focus an entire fashion collection (jacket, blazer, shirt, chinos) around a removable UnPocket to ramp up the Orwellian flavor. Talk about a sign of the times…

The UnPocket also works as a stand alone privacy pouch, much like the OFF Pocket. So women wanting in on The Affair’s privacy chic don’t have to dress in menswear to rock the UnPocket (unless they want to). 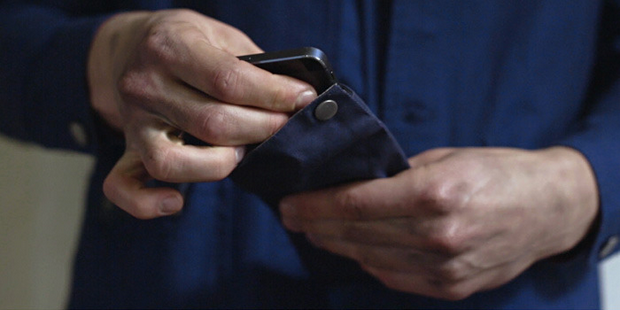 What’s the point of putting your phone/chipped passport/contactless bank cards inside a Faraday cage? The idea is to cut these items off from any networks so they can’t be hacked into in real-time. And being as a phone’s cellular, GPS, Wi-Fi and Bluetooth signals are blocked the user’s real-time location can’t be tracked. The UnPocket shields and absorbs RF signals up to ~100 dB across the RF spectrum, according to Csaki.

Identity theft and location tracking are the primary reasons to go off-grid in this way, although it’s worth underlining that shielding only attains a fleeting real-time privacy. As soon as you pull your phone out of the UnPocket, all of your data will resume flowing to the services you use and have opted in to (and to any governments and hackers who are watching you anyway, without your consent).

If you’re concerned about how the UnPocket might affect your smartphone’s battery life when in use, Csaki claims battery drain is relatively minimal.

There will of course be some drain if you don’t also switch your phone off when using the UnPocket, caused by the phone automatically continuing to search for a network connection. But Csaki says over a month of testing his iPhone 5 loses between 8 to 11% of its charge over 8 hours inside the UnPocket vs 5 to 8% lost normally over the same period outside the pocket (when the phone is on but being unused).

The UnPocket costs $29 to Kickstarter backers, while The Affair’s Orwellian shirts or chinos (which each come with a removable UnPocket) are $98 each, while the jacket or blazer (again each with an UnPocket) are from $119.

If the firm hits its Kickstarter goal it’s aiming to ship kit to backers next February. At the time of writing it’s raised just over £4,500, with another 29 days left of its campaign to run.