Days after a German court issued a nationwide injunction against on-demand ride-hailing service Uber, the company has announced cuts to fares in two key cities: Berlin and Munich.

Uber’s revenue split with drivers in Germany remains at 20% for itself, 80% for its “partners”, as it refers to the people who power its service by turning their own cars into private taxis that Uber users can hail via the app.

Uber had already vowed to continue operating in Germany despite the temporary injunction imposed by a Frankfurt court late last week. Earlier this week Uber told TechCrunch it will appeal the injunction. Once any appeal hearing starts the ban will be lifted until a firm legal outcome results.

Evidently the company has also decided the best line of defense when its service is under fire is to drive additional passenger demand via fare cuts. Uber said fares in Berlin and Munich are being cut by “an average of 30 per cent” — and claimed that for some users it may now be cheaper to go by Uber than to drive themselves.

It’s pointing users to an online tool where they can calculate the relative costs of running their own car vs how many Uber Pop (its cheapest service level) trips the same budget could buy them.

Uber’s price cut could backfire if it triggers driver anger in Germany, a market where the company is already under sustained attack from the taxi industry and has been ruled illegal by the courts. Uber fare cuts have caused driver protests in multiple markets where it operates. At times the company has even subsidized the impact of fare cuts on drivers by, for instance, continuing to pay them their percentage of the original fare (i.e. rather than of the discounted amount).

It does not appear that Uber is offering this sort of subsidy in Berlin and Munich. A company spokesman confirmed to TechCrunch that the revenue split in the market remains at 20:80.

Another potentially thorny knot for Uber drivers in Germany is that those continuing to offer the service may be risking a penalty fine of €250,000 — owing to the nationwide injunction currently in place against the service.

An Uber spokesman claimed this is not the case, saying the injunction targets Uber the company, rather than its non-employee “partners”, and adding that the company “stands behind its partners”. 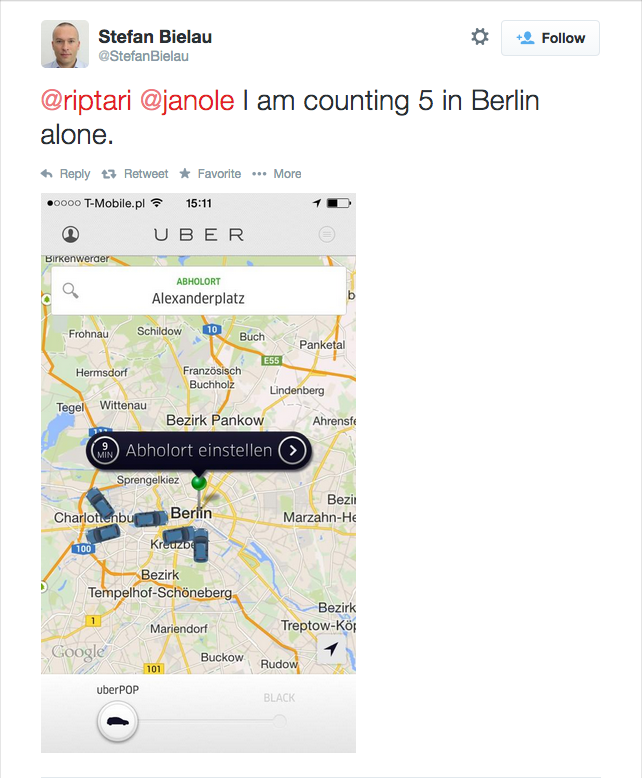