xAd, a mobile ad startup that specialises in serving media specific to a user’s location, is today announcing $50 million in funding — significant not only for the size of the round, but also for the context around the money coming into its coffers.

xAd is already profitable, growing fast, wasn’t in the market for raising financing (it has “several million dollars in the bank already,” its CEO says), and doesn’t even have any plans for what it will do with it.

It seems that the main interest for now is to pad out xAd’s nest egg for what will come ahead. “Location has the potential to become the next multibillion dollar business,” xAd CEO Dipanshu Sharma tells me.

The idea is that location-based advertising, fuelled by the usage of smartphones and other portable, connected devices, will follow the same trajectory that search has had in advertising, and xAd wants to be the leader in it. Today, it already serves ads that cover 40 billion impressions per month across some 7 different ad networks, Sharma tells me.

The funding round — a combination of debt and equity financing led by Institutional Venture Partners (IVP) with significant participation from existing investors Emergence Capital and Softbank Capital, as well as Silicon Valley Bank — comes in the wake of acquisition offers and approaches from other VCs.

IVP’s approach stood out partly for the valuation that they attached to the offer, according to Sharma. He is not divulging names of interested parties, or the size of his company’s current valuation, except to say that it compares favorably to those of other ad-tech companies that have gone public. (However, that’s a pretty huge spread. Criteo’s market capitalization, for example, is $2.17 billion, while Marin Software is at $289 million.) Meanwhile, Venturewire puts the valuation at $250 million. 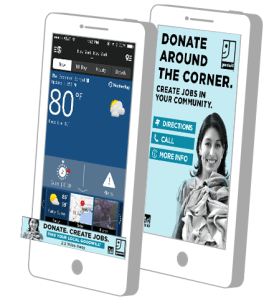 The mobile ad market — which was worth nearly $20 billion in revenues in 2013, according to the IAB — has seen a lot of activity of late, focusing not so much on building inventory but in fine tuning the mobile ad experience with more intelligently targeted ads, and ads that are more media rich.

That has seen companies like Twitter and Facebook, which make more money from mobile than desktop advertising, invest in technology to improve how they serve ads; and companies like Opera acquire companies focusing on areas like mobile video, to help them tap into the bigger amount of ad dollars that brands are spending on mobile ad campaigns.

xAd adds another twist to the mix: serving ads to users to coincide with their location.

This is something that many companies have tried to tackle over the years (other names include biggies like Google but also Placecast, Skyhook Wireless, Verve, JiWire, as well as efforts from mobile carriers and public WiFi providers and many more), and indeed the opportunity for location-based ads alone is sizeable: nearly $5 billion in 2014, and over $15 billion by 2018 in the U.S. alone, according to BIA/Kelsey.

What xAd is offering that it says makes it different and better is a technology platform that not only lets companies tailor ads to location, but then monitor the analytics behind how well those campaigns work.

It’s the platform aspect that interested IVP. “We get very excited about companies using tech rather than sales teams to grow,” Dennis Phelps, a general partner at IVP who is joining xAd’s board, told me.

The platform aspect also lets the company scale more easily, he points out. xAd claims to be the first U.S.-based hyperlocal mobile advertising technology platform to expand globally. “Our business is growing very fast and doubling over last year,” says Sharma. Outside of the U.S., xAd is now live in Germany, the UK, Canada and India and about to go live in China and France.

The other interesting thing is that xAd, as a platform, powers quite a lot of other services, and so its business is not entirely dependent on how it exists as a standalone entity. When xAd first started out its approach was direct-to-market, Sharma recalls.

“We started out looking at SMBs, but they are tough. They don’t care if you are Foursquare or Aol or Facebook, they just want the [customer] lead. That’s why Google has been so effective,” he says.

They stayed focused on SMBs until 2012, he says, and while xAd continues to serve SMBs, in 2012 it launched a new service, offering solutions for national brands. Today they serve over 300 of these, and that’s when the revenue growth really started to take off, he says.

xAd also offers back-end technology for location-based services to a number of third parties. “We’re mostly the platform provider in this and other situations, where advertisers and doing programmatic buying and third parties are using our APIs,” he says.

As one example, when xAd came to the UK, it partnered with companies like Thomson Local that were already working with businesses to grow their mobile advertising. “We launched in the UK with 60,000 advertisers,” he says.

That’s, so far, without launching anything around some of more buzzy terms you’ve heard associated with location-based marketing and advertising in recent times. In other words, no plans announced yet for working with iBeacons or near-field communications.

While there has been a lot of consolidation in the mobile ad space, xAd has so far stayed out of it, both on the side of being a buyer or getting bought. That’s not to say that it won’t at some point, though. “Potential acquisition offers have been there, but nothing that we have taken seriously,” says Sharma. “We have something that is special, and we are solving real problems and we want to go for it.”

On the other side, he acknowledges that there are a lot of companies out there that are looking to get acquired because they lack the scale for decent returns as standalone businesses, and funding is “drying out.” On top of that, with the rise of ad tech, there is an argument to be made, he points out, for solutions that really are better sitting alongside other services, rather than standalone businesses (which goes back to that ever present question of whether a startup is a platform or a service).

So far, though, he says xAd has yet to find a suitable property that, in his words, works out to “One plus one equals three.”

“A lot of companiess come to us, ” he says, but if xAd makes an acquisition, “it will have to be more than just an incremental improvement.”

Prior to this most recent round, xAd had raised $24 million in three rounds of funding.