The top gripe about Facebook is that people don’t know who they’re sharing with, so in the coming days Facebook will push everyone through a multi-step privacy checkup that reminds who they share statuses with, what apps they’ve given permissions, and what’s visible on their profile. A cutesy blue dinosaur will lead people through the process which was originally tested in March but is now getting shown to everyone.

Some users will undoubtedly find the procedure annoying, even if its well-intentioned and they need it. They’ll be able to skip it but will get prompted again later. For now the tool is only on the web, which means a huge chunk of users won’t see it until a mobile version is developed later. If Facebook can get users to endure the little chore while making them more confident about who they share with, they might be willing to post more frequently and wider range of content to the social network. 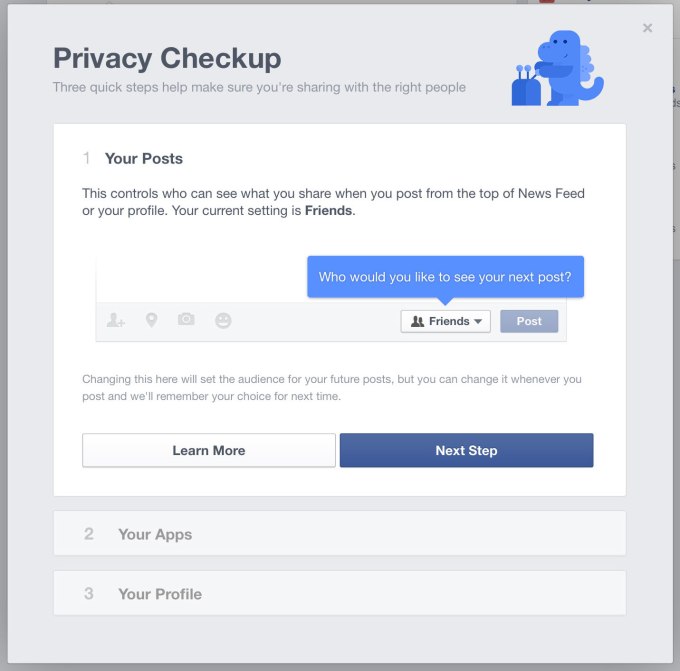 In a bit of self-deprecation that shows Facebook’s aware of the dodgy perception of its privacy, the company writes “We know you come to Facebook to connect with friends, not with us.” That’s funny, since everything you share is in fact shared with Facebook for the purpose of personalization and ad targeting, even if its only robots and not humans that see your content. The constantly changing settings and defaults make it tough to keep track of who sees what, but the checkup only hits the biggest settings and many smaller ones are still out there to confuse people.

The privacy checkup will pop up overlaid on the web homescreen when you login sometime in the near future.

The posts checkup highlights if you’re sharing to the feeds of friends, a custom set of people, or everyone, and how to toggle the setting from the status composer. The apps step shows all the apps you’ve given Facebook permissions, and lets you manage what personal data about you the apps can access. Finally, you’ll be shown the visibility of your current city, work history, and education shown on your profile. This also serves Facebook nicely by reminding you to keep this info up to date, which lets it target you with ads. 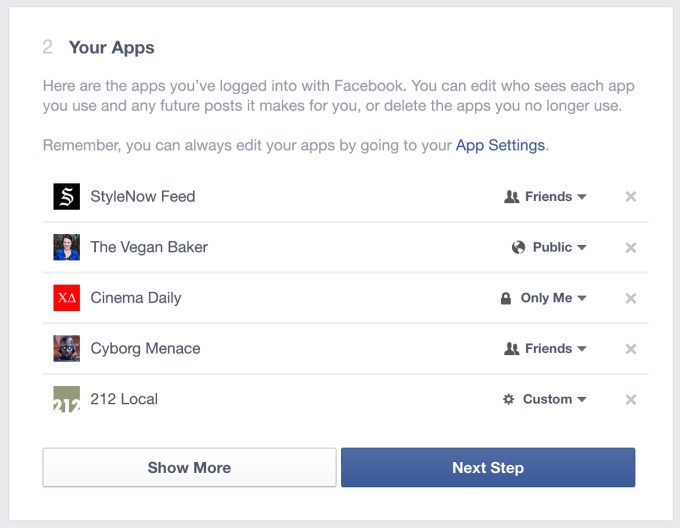 So far, it’s been way too easy for users to accidentally leave the status composer set to public and inadvertently overshare things that could jeopardize their integrity in the eyes of potential hirers, or expose them to stalking by Internet weirdos.

This adorable tyrannosaurus is oddly fitting mascot for Facebook’s privacy team. Something that seems friendly and innocuous, but that grows more powerful by devouring your data. The privacy checkup won’t make up for a decade of dicey privacy, but it’s a dinosaur-sized step in the right direction.