Are there any limits to the everyday objects that will get connectivity and become controllable via an app? Sanity and smartphone battery life might suggest so, but this soon to launch Kickstarter project which is seeking to crowdfund a pair of connected, heated insoles to warm your tootsies and track your running steps sort of suggests otherwise.

Digitsole, as the product is called, is not the first ‘smart insole’ we’ve seen either. Google whetted our foot-based wearable appetite by showing off a connected, talking shoe as a SXSW art project back in March 2013. More recently a Bluetooth-enabled shoe/insole called Lechal cropped up, offering haptic footsie feedback to help the wearer navigate without having to look at a map. We’ve also encountered smart socks that help runners analysis exactly how their feet are connecting with the ground, providing real-time haptic feedback so they can adjust their footing on the fly. So far so sort of useful. Maybe.

Well now we have the prospect of a connected heated insole that can be warmed up with the swipe of a finger in its companion Android or iOS app — to a max temp of 104 Fahrenheit/40 Celsius for up to eight hours, if you want to have really sweaty feet, on a single battery charge. Each Digitsole is recharged via a USB port on its back edge.

An app for coddling your toes? That sounds suspiciously like one of those first world problems that aren’t really problems. Still, if you work outdoors in the freezing cold and are prone to chilblains you may just think this is manna from heaven.

In addition to heated feet on demand, the Digitsole has two other tricks up its sleeve. Or rather down your socks. It tracks steps and calories burnt, and does so — it claims — better than wearable fitness bangles, given that it knows exactly how many steps you are taking since it’s sitting in both your shoes. (Or at least it’s sitting there until you have to pull it out to recharge it. That won’t get at all old…)

Digitsole’s French creators are seeking $40,000 on Kickstarter to fire up their heated insole dreams. Should they manage to convince enough people to part with $99+ for a pair of fancy Bluetooth toe warmers they’re aiming to ship to backers just in time to beat the January chills. 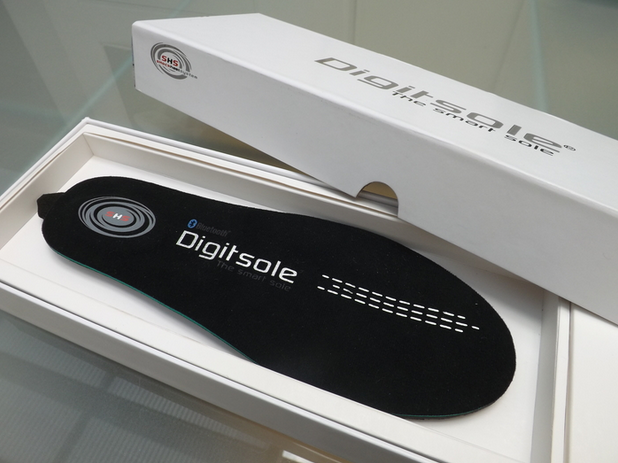