OneDrive, Microsoft’s rebranded cloud-based storage and file sharing service that competes against Google Drive, Apple’s iCloud, Box and Dropbox, is issuing an update to its mobile apps today, part of the company’s bigger push to differentiate the service from the rest of the pack and attract more users. While the iOS, Windows Phone and Android apps are all getting new features, it is the Android app that is the most interesting of the three, with the launch of OneDrive for Business.

Here, perhaps all too aware of what kind of an impact KNOX and other Android-centric efforts are having on Microsoft’s position in the mobile enterprise market, Microsoft has chosen Android for a big integration play on OneDrive. Aiming at the prosumer market — the group of users who sit somewhere between avid consumers and higher maintenance business people — it will for the first time give OneDrive users the ability to bring together photos and other documents that they create as private individuals to sit alongside what users are consuming and creating at work.

Not unlike what companies like Evernote have constructed with documents from Evernote Business sitting alongside documents from a user’s personal Evernote account, where users are given a way of looking at files across both sides of their smartphone-centric lives, the idea here, Microsoft says, is for a solution that “holistically addresses” the needs of everyone. Much like Microsoft’s bigger ethos today of being all things to all people, this seems to be how the company sees OneDrive’s development, too: it’s now for people wanting a useful app, businesses wanting productive employees and IT managers wanting security and compliance.

What that means in practice is that users now have visual cues showing them when files are work or personal, with a partition set up between the two, but accessible from the same app, and the same account. For those who are looking for further security around a specific document or for the whole app, you can now also make files password protected, accessible through a four-digit access code that you can set up.

Michal Gideoni, a product manager for OneDrive, wouldn’t comment on why Android was chosen as the first platform for the personal/work integration on OneDrive, but she did emphasize that it would be coming to other platforms — its own Windows Phone and iOS (which is now working with IBM on mobile enterprise solutions) — in the future.

“This is the first ever unified app and it happens to be on Android,” she said. “But this is the start you should expect this to come in the near term to iOS and Windows Phone. We are committed to cross devices.”

Also, this doesn’t mean that iOS and Windows Phone are getting short-changed as such. iOS is getting a native search experience, where users swipe down on the app to look for files and folders in OneDrive. This is a tip of the hat to how Microsoft’s bing search has been working in ever closer relationship with Apple and iOS for a while now. 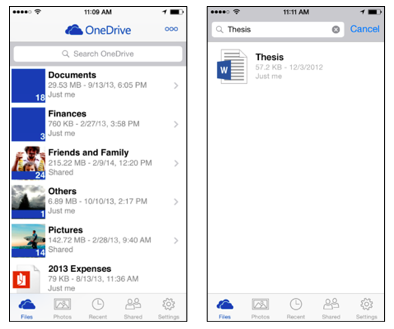 Other updates to the iOS app include the ability to now look through your photos on OneDrive in a card-style format, something OneDrive had already been offering to users of its web app. 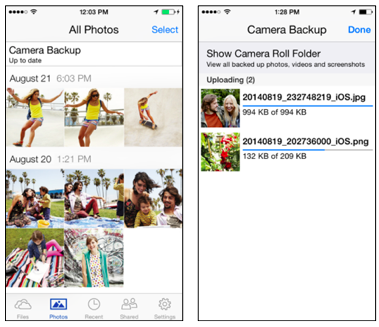 Windows Phone 8.1 users, the most loyal of Microsoft users, seem to be getting short-changed the most in today’s news — they are getting “a number of bug fixes” and now will be able to access their OneDrive recycling bins to restore files that have been accidentally deleted. :( 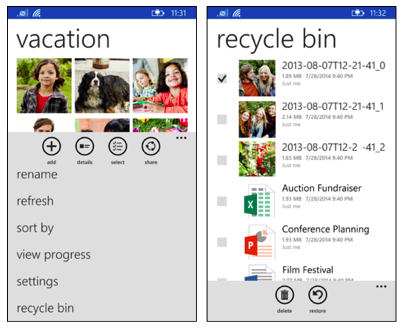