Are users itching for a better way to search through the information contained within their mobile apps, bypassing the web and traditional search? Developer Steve Taylor decided to find out, and is now launching an iOS application called In-App Search which is essentially a Google-like search engine where links automatically open up your apps when tapped.

This is made possible via “deep linking” technology, which is something everyone from smaller startups to big companies like Google, Twitter and Facebook have begun to implement. In layman’s terms, it’s about making hyperlinks – the things that have historically connected the pages of the web – smarter. Instead of just pointing you to web pages, links can now be more aware of what device you’re using, and if mobile, what apps you have installed.

The links then show you the information and content in the container that makes the most sense for you, whether that’s a desktop site, mobile website, or native app.

Google rolled out deep linking within Google search last year, allowing Android users searching on their phone to find and launch content in their Android apps by clicking on links to Google search results. But on iOS, Google (or any competitor’s) searches made via Apple’s Safari browser don’t do the same for iOS applications. (At best, some links can launch the App Store app to enable quick downloads).

So, in theory, this is where the In-App Search app would come in.

At launch, In-App Search supports 33 iPhone and iPod touch applications, and 24 iPad apps in its index. Under the hood, Taylor uses Google Custom Search to power the experience. A server is used to download the searchable app catalog, configure each search and convert web URLs to app URLs. The apps themselves are searchable thanks to technologies like App Links, Twitter app cards, and Apple Smart Banners, though Taylor says others require a more customized URL conversion approach.

In practice, In-App Search works like any other search engine. Users type in their query (auto-complete is also available), and then view their search results. As the App Store screenshots show, a search for keyword “Australia” may bring up a Twitter account, Facebook page, Instagram account and more. (Wikipedia, sadly, is not currently included.) When you tap those links, the app itself launches, taking you to the exact page you need. 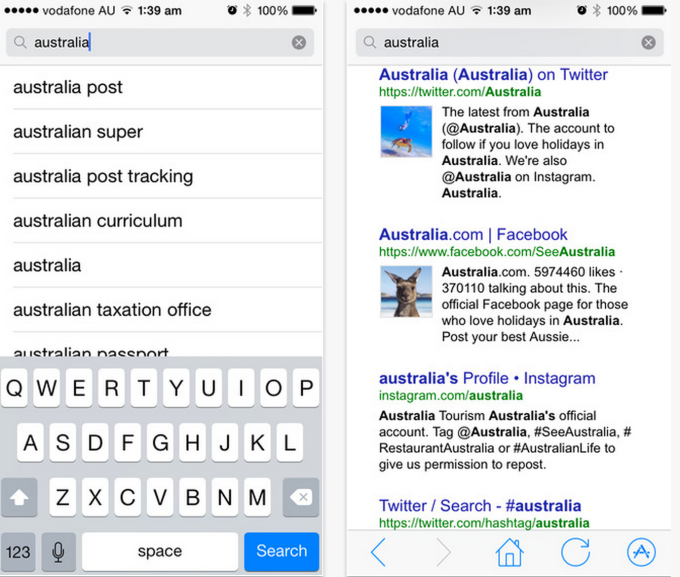 In-App Search for now is still very experimental, as it’s a bootstrapped product built in just two weeks of nights and weekends work.

Taylor currently works full-time for Clevertar building a tablet app called Anna Cares, and he’s built mobile apps before, including, we should point out – a clone of Dots (which is not so cool – we’re not a fan of clones).

“I wanted to spend as little time and money as possible to test the usefulness of in-app search,” explains Taylor of why he built In-App Search.

He says he wanted to validate the usefulness and demand of an in-app search engine. And if he finds out that users don’t want this? “I would have wasted hardly any time and money…I haven’t even started a company, which I see as a waste of time and money if this ends up going nowhere,” Taylor adds.

It’s worth pointing out that apps for searching apps have been tried before. Everything.me once offered a search engine for both native and mobile apps, before pivoting to become an Android launcher. Quixey also developed app search technology, which now exists as an Android app with somewhere between 50,000 and 100,000 installs.

And at the end of the day, all these startups will have to take on Google, Facebook, Apple and others, or at least hope to get on their radar as a potential acquisition target.

In-App Search is a free download here on iTunes.