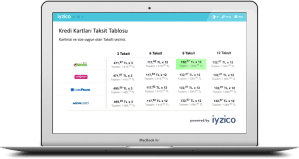 Turkey’s Iyzico, which provides a platform to let e-commerce sites and other apps easily accept online payments (and can be thought of as the ‘Stripe of Turkey’), has raised a $1.4 million series B round. The funding was led by Turkish VC 212 Invest, along with previous backers Pahicle, and Speedinvest — adding to the $1.4 million it raised just over a year ago.

Iyzico says the new capital will be used to bolster its leadership position in Turkey where U.S.-based Stripe has yet to launch (despite ongoing European expansion), but where competition does exist in the form of the Samwer brothers’ Rocket Internet, which operates Stripe clone Paymill.

How long the Turkish startup can fend off Rocket Internet and Stripe, should the latter choose to enter the region, remains to be seen. That said, there are not-insignificant regulatory hurdles to cross in Turkey, as well as local market dynamics that are specific to the region.

On that note, Iyzico cites regulations that require payment providers in Turkey to apply for a license via the Turkish Banking Regulation and Supervision Agency. Specifically, each provider needs to establish a local, compliant IT infrastructure, says the startup. That would potentially place Turkey fairly low in the priority list for any startup operating in the space, compared to European Union countries — where one license usually covers the whole of the EU — which Turkey is not.

However, there are a number of factors that make doing business in Turkey attractive as a whole; namely the maturing of its online market, making it one of the fastest growing e-commerce markets in the world. Turkey has around 40 million Internet users and the e-commerce growth rate has been approximately 30% yearly since 2008, notes Iyzico. In other words, it’s a decent-sized pie from which to grab a slice of online payments.

“The e-commerce and payments markets will change dramatically in the next 10-months,” Iyzico founder and CEO, Barbaros Özbugutu, says in a statement. “This recent round of funding puts us securely in a position to capture the number one spot in our fast growing market.”