Not content to cede the battle for TV’s second screen to Twitter, at tonight’s Emmy’s, Facebook in partnership with Access Hollywood, is unleashing something it called the “Mentions Box” on the celebs walking down the red carpet. This box is really just an oversized Facebook-branded tablet, which celebrities will shake to reveal a fan’s question. They’ll then record their response to the question directly on video via the tablet’s camera, and those responses will be posted to Facebook.

News of the Mentions Box was reported by The WSJ, Mashable and elsewhere, while the TV show Access Hollywood has also been promoting the tablet on its own Facebook page this week.

And “Mentions,” in case you missed it, was the invite-only application Facebook launched for celebrities, which William Shatner promptly trashed as being “ill-conceived.”

You know what else is ill-conceived? Asking celebs all dolled up for their big night to do something as dumb as shake a tablet to answer fan questions. Because I’m sure they really want to look stupid at the Emmy’s. And I’m especially sure they’ll love being roped into doing free marketing for Facebook.

Still, they’ll probably do it because Facebook delivers massive user numbers, and celebs attending the Emmy’s are ultimately in the business of self-promotion.

Oh, and why do the actors need to actually shake the Mentions Box, you may ask? Because…well…reasons.

The tablet’s creator, iStrategyLabs, says the idea was to build something to represent Facebook in the physical space, and ended up going with a tablet that’s a cross between a Magic 8-Ball and Etch-A-Sketch. 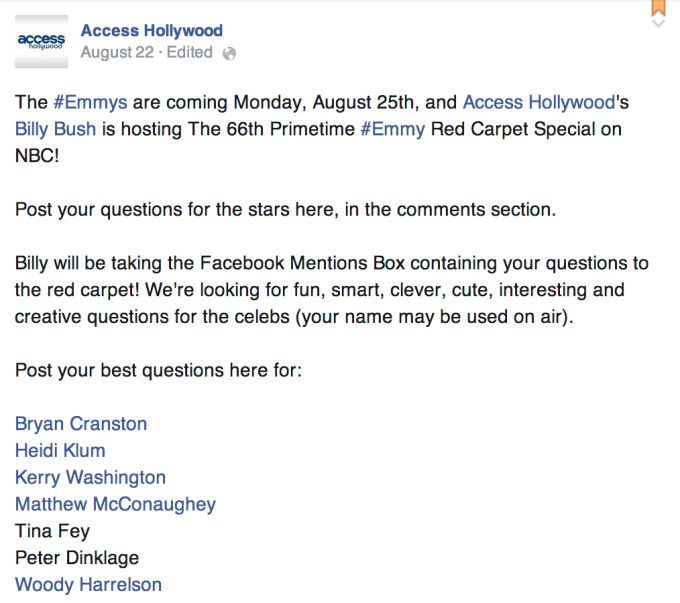 Crowdsourcing input from fans is always something of a risky idea for news organizations, but is often seen as a clever way to involve viewers in the action. Of course, “Access Hollywood” may be “news” of the fluffier variety, so there’s not too much concern about, you know, journalistic integrity in deferring one of the many superficial questions actors get pommelled with as they walk to the venue to some random viewer who has mastered the art of using Facebook properly (or, as the case may be, is just barely managing it).

A brief look today at what “Access Hollywood” has to work with so far is a bit frightening. I pity the poor soul who has to curate the Q&A to make something that’s TV-worthy. Some of the questions are downright cringe-worthy, while others could be resolved by some basic googling. 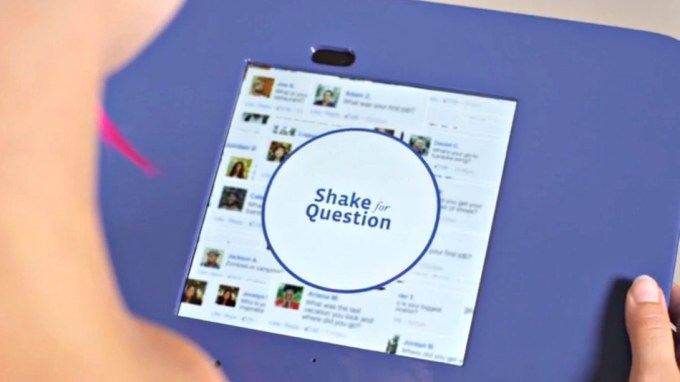 – For Matthew [McConaughey]: What do you love most about high school girls? ( A reference to a line his character said in “Dazed and Confused.”)

– Jimmy Fallon how meny kids do have [sic]

– Matthew, I just foung a baby kitten here in Longview,Texas…would you shout out a name for him…

– To Melissa Mccarthy you were asome in tammy

I’m now actually excited to watch to the Emmy’s just to see this disaster in action. (Oh please let there be one celeb who politely but pointedly declines to shake the tablet. Oh please let the tablet ‘malfunction.’ Oh please let a celebrity struggle to read a mistyped question.)

This marketing stunt for Mentions won’t likely have a significant impact on Facebook’s second-screen ambitions, because it’s only focused on asking celebs on the spot to engage with fans, while making them aware of this new app called Mentions.

But in the long run, what Facebook misunderstands about the second screen experience is that what’s great about following the action on Twitter is hearing the voices of the many, in a never-ending public stream of hashtagged data. On Facebook, in comparison, a click on a “trend” involves posts from brand pages mixed in with the (often accidentally) public updates from various Facebook users. Meanwhile, many of the best conversations on Facebook take place privately, within a network of friends, not visible to the wider web or world.

But Facebook can’t simply let Twitter become known as the place the world converges to discuss – and in the case of things like Ferguson, break – the news and chat about events. And so it will insert itself into the action like this, however uncool that may be.