The recent surge of interest linking e-commerce to disruption is nothing short of phenomenal. A trend manifested by the rise of Amazon, initially focused on the book industry, has scaled across all sectors of retail. While some believe that 2014 is the year that everything changed and disruption finally arrived on the traditional retailer’s doorsteps, we believe that by analyzing the last three years of e-commerce from an investor perspective, 2010 was the real inflection point that set these trends in motion.

It is with that lens – investor positioning – that we provide those companies looking to integrate e-commerce into their strategies with a roadmap, as well as open their eyes to a few profound surprises.

Over the past several years, there has been a clear transformation in the way consumers use the Internet when shopping for non-durable (softline) goods. As low-wage growth and a shift to higher-ticket item purchases have been themes driving headlines, it has become evident that softlines are in a constant wallet-share battle, as the industry has shown very minimal growth. This has caused softliners to go on the offensive and adopt strategies to attract this new, multi-channel consumer.

Expanding into e-commerce clearly has benefits, but it also comes with potential downfalls. Analysts believe that as multi-channel shopping blurs the lines between online and offline, companies will be faced with margin pressures. Despite these potential pitfalls, many retailers see the margin compression story as a less material factor when compared to the potential market share pressures involved with not focusing on e-commerce.

Therefore, traditional retailers have been forced to take notice. Exhibiting this dilemma, the world’s largest retailer, Walmart, highlighted its push into e-commerce on its August 14 earnings release, blaming the profit miss in part on increased e-commerce investments.

As to be expected, some companies have implemented the online/offline initiative better than others. Our analysis suggests that from an investor perspective, e-commerce does not in fact resonate as the widely believed growth story, but more as a story of disruption.

With all of the talk surrounding the growth of e-commerce, one would think the trend would appeal to a wide set of investors regardless of investment style. Interestingly, that thesis could not be further from the truth. Starting with Nordstrom’s $270 million purchase of HauteLook in 2010 to current day, a period in which e-commerce became a mainstream trend, e-commerce-specific and brick-and-mortar retailers with the greatest e-commerce exposure saw an increase in hedge fund ownership of 175 percent and 95 percent, respectively.

Furthermore, hedge fund ownership in those companies lacking e-commerce exposure is down 17 percent during the same period. 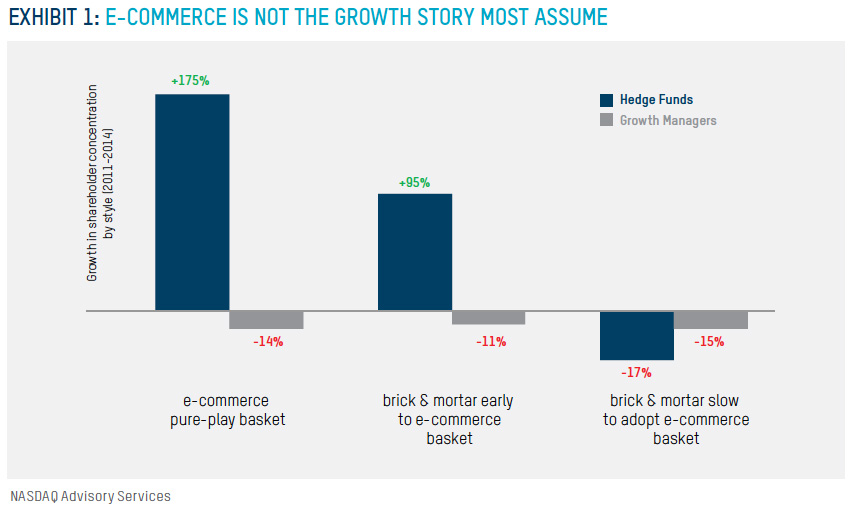 Conversely, the late 2010 timeframe ushered in another glaring trend: traditional buyers of multi-year macro tailwind trends – growth investors – stopped showing an interest in e-commerce. During the late-2010 to present day period, growth investor ownership in the most exposed e-commerce companies is down 14 percent.

A growth trend, such as e-commerce, that most would assume attracts those investors looking for mega trends has had the completely opposite effect. Even the brick-and-mortar retailers with the top e-commerce prospects have 11 percent less growth manager ownership than in 2010.

E-commerce companies perform better; those that don’t are open to investor discontent

It is with that clear disparity in performance during the three-plus-year time horizon that attracts activist attention and elevated short interest levels, market forces which many companies in the sector have been battling as of late.

As the consumer landscape continues to evolve and e-commerce becomes a larger portion of retail companies’ revenue bases, it’s increasingly important to keep in mind the types of investors this disruptive aspect is attracting, and tailor your corporate story and strategic direction accordingly.

Whatever your vision may be towards online strategies, our analysis suggests that from an investor perspective, e-commerce is a story of disruption and companies should communicate it as such.