WillCall is a pretty concert app, but its weakness was a lack of deals with venues to get tickets to sell. Well no more, as today it was acquired by Ticketfly, the second-biggest concert ticket seller in America, which has relationships with thousands of venues. Ticketfly will keep WillCall running and feed it inventory.

Back in 1996, Andrew Dreskin started TicketWeb to disrupt Ticketmaster, but ended up selling it to the concert giant. Then he started Ticketfly in 2008 to do it again. So when he saw WillCall‘s potential to disrupt his new business with a beautiful, mobile-first iOS and Android apps, it was his turn to play acquirer. 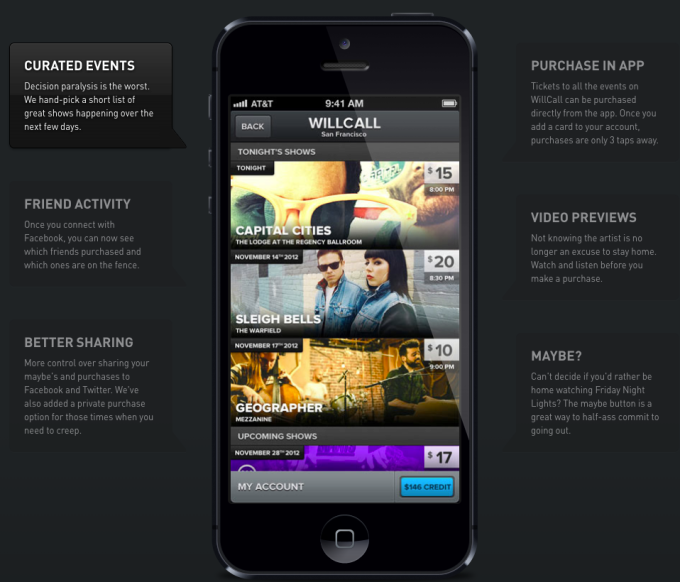 That’s quite a different outcome than when sources told me a year ago that Ticketfly was considering cloning WillCall or trying to starve it out by refusing to give it tickets to sell. Now they’ll cooperate. Ticketfly will continue to run its traditional ticket buying interface on venue websites and its own, while WillCall will help it sell out shows in the last few weeks with its image-laden browsable app of nearby concerts.

They’re not going to shatter Ticketmaster’s exclusive deals with huge arenas, amphitheaters, and stadiums. But together they could lock down the mid-market, handling the smaller venues and clubs where fans can get an intimate live music experience.

WillCall co-founder Donnie Dinch will become Ticketfly’s GM of consumer experience. He tells me the deal makes sense because Ticketfly has the sales force and connections WillCall needs and he “didn’t want to reinvent the wheel”. His team will move across San Francisco to the Ticketfly office in SOMA because, Dinch deadpans, “they have significantly more food than us”.

Watching WillCall From Launch To Acquisition

Having covered WillCall since its inception, I think this is a smart deal for the startup. I watched Dinch unveil WillCall at 500 Startups demo day back in 2011, then tirelessly work the door at a launch party for his company and fellow batch mates that night at Public Works nightclub in SF. There was no doubt that this guy was fanatically obsessed with making the concert experience simpler so people could bliss out on the dance floor. 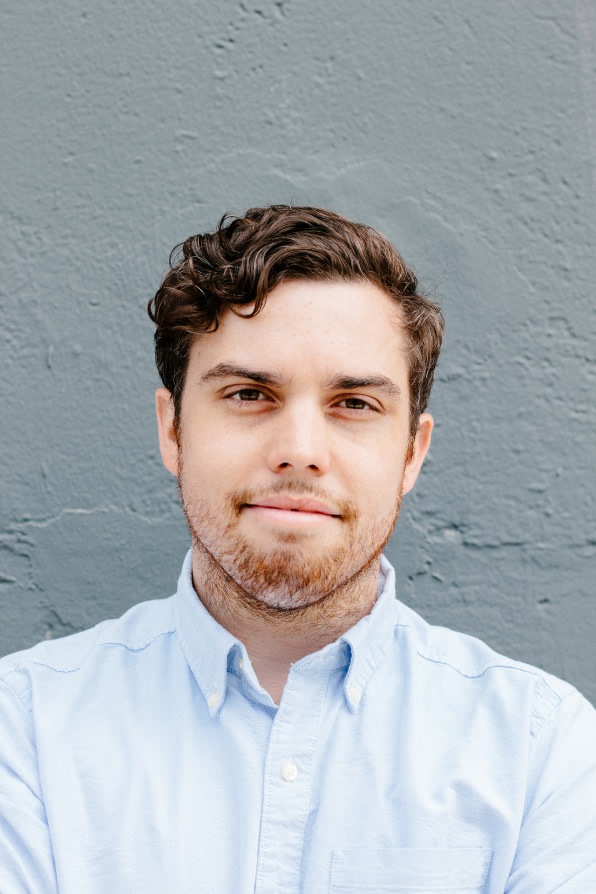 While WillCall started with a very limited selection of shows, they were a curated set of the coolest up and coming bands. Combined with a smart system that would notify your friends when you bought tickets, WillCall built a loyal following amongst concert nuts in SF.

It would go on to raise an $850k seed from SV Angel in 2012 and then a $1.2 million Series A that included Napster co-founder Sean Parker in 2013. It’s masterful comms lead K. Tighe made sure the hip WillCall flavor transferred over when it eventually launched in New York, then Los Angeles. And it scored strong hires like Facebook Stickers designer Sophie Xie. 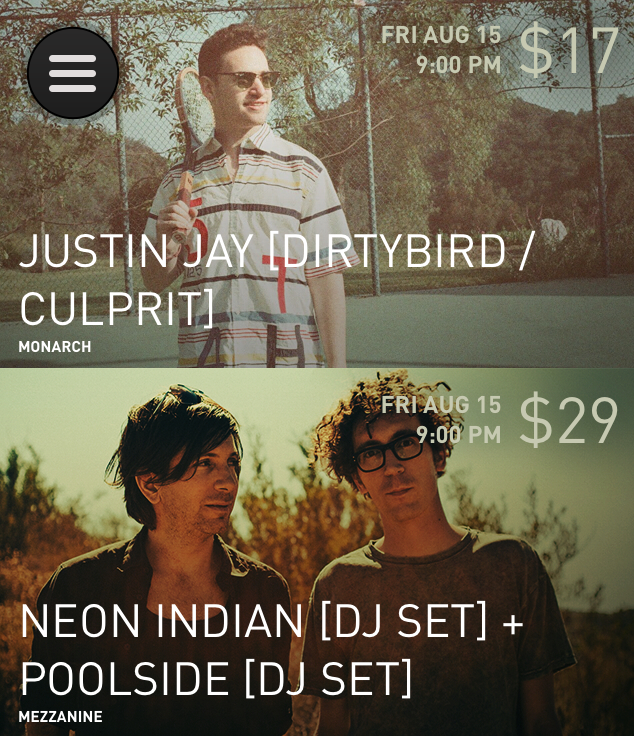 Still, WillCall was always hampered by lack of access to gigs by name-brand bands. The company was at its best when it would book it own concerts in odd locations, sell all the tickets itself, and have full control of the experience. There was something electrifying about being enthralled in the sound amongst a room full of music tech early adopters, like at its pop-up with Geographer at the little-known Regency Lounge in SF.

But over the past year, competition in the last-minute mobile ticketing space heated up with the rise of Applauze, YPlan, SongKick, and StubHub Music. WillCall began hedging its bets with a feature called BarTab that lets you buy drinks at concerts through your WillCall account just by saying your name. Though it’s only in a few venues currently, Dinch tells me BarTab’s gross volume of transactions has already nearly eclipsed WillCall’s total ticket sales. 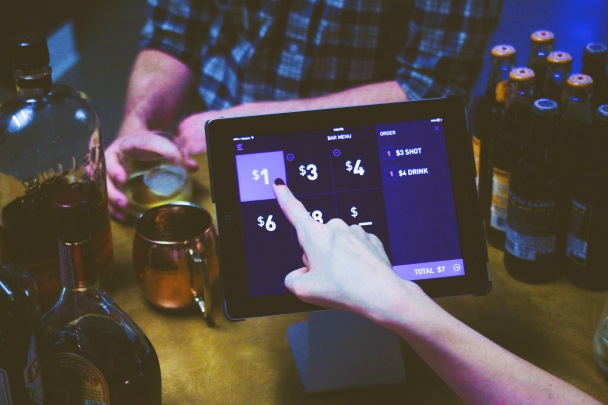 To make any more progress, though, WillCall would have needed a serious sales team to push BarTab to more venues and secure top-tier ticket inventory. That would have required raising more money and a lot of hiring. Even then it’d be fighting an uphill battle since most venues are already tied up with Ticketfly or Ticketmaster. Thanks to the acquisition, it will get everything it needs to push its app to the next level and get traction outside of hardcore indie music lovers.

Dreskin explains “the problem WillCall had was just collecting ticket inventory, but Ticketfly doesn’t have that problem.” Dinch continues “we look at [WillCall and BarTab] and think, ‘how do we get this in as many people’s hands as possible?’ This was a great opportunity to team up.”

Dreskin says his goal with the acquisition is to “accelerate innovation in how consumers experience events”. WillCall’s BarTab and experiments with merchandise sales will be combined with Ticketfly’s extensive analytics tools for venue managers to “help promoters better understand the value of a fan.” He hinted that loyalty programs for frequent ticket buyers could be on the way. 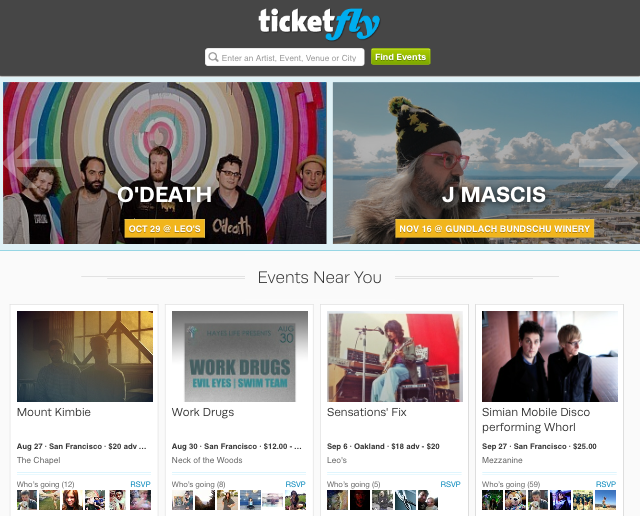 Ticketfly is already on track to handle $400 million in gross transactions for over 100,000 events this year. It needs to keep improving to stave off encroachment from the top by Ticketmaster and bottom from EventBrite. Meanwhile WillCall has to box out its mobile-first competitors.

But with the relationships and product vision, WillCall and Ticketfly could go beyond traditional sales to improve everything about concerts, like getting in the door, inviting friends, buying drinks or merch, and tipping the band. “We’re really passionate about nightlife”, Dinch beams.