The price of litecoin and bitcoin, two of the most prominent cryptocurrencies, once saw their prices go up and down in something approaching a consistent ratio.

That’s to say that bitcoin was always worth far more than litecoin, but the two coins saw their value rise and fall roughly in step with each other.

In June, that started to fall apart. Noting the decoupling, TechCrunch threw together the following chart, which superimposed their prices and market caps — in USD, data via CoinMarketCap — over time: 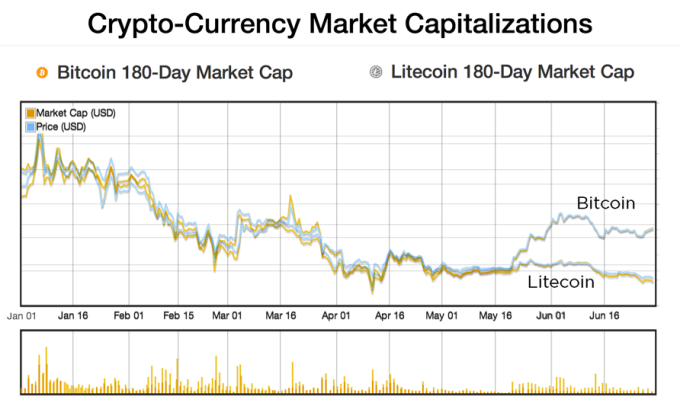 The trend isn’t hard to spot, is it?

Let’s talk about the last few weeks. It’s been tough for the “alts,” or the cryptocurrencies that are not bitcoin. Prices are down nearly across the board.

Litecoin, which traded north of $48 inside of the past year, now sells for less than $4.

Bitcoin itself has seen a new negative trend emerge in its price as well, as TechCrunch noted in a recent post.

Our prior data source changed how it charts data, so using CyrptoCoinCharts, here’s a somewhat similar chart showing the decoupling trend continuing:

Bitcoin, being the larger, better known of the two, has seen its price endure the downswing perhaps a bit better than its smaller cousin.

What I think is evident is that whatever short-term luster that litecoin might have once had, is gone.