OKPanda closed a $1.4 million round back in February, also led by Resolute Ventures, so the new seed funding brings its total raised to date to $3 million. The service aims to make it easier for Asian English language learners to master tricky pronunciations by offering conversational English practice — including by connecting them to human tutors in real-time.

The startup was co-founded at the end of 2012 by serial entrepreneur and app developer Adam Gries and Nir Markus. Gries said the new financing is the result of “strong inbound interest” in OKPanda after strong growth in Japan this year.

Its flagship OKPanda English Conversation app has hit 450,000 users since launching in Japan in December 2013, according to Gries, while its new Everyday English app has passed 125,000 registered users three weeks after launch. The main app simulates conversations, allowing the user to take either side of a conversation and participate in it to practice grammar, vocab and speech. While the Everyday English app is focused on listening to conversational English to improve pronunciation.

“There are not many high quality, deep, mobile English learning apps,” says Gries. “Most being simple flashcards and games with little depth or variety. This is an opportunity to build up an audience. With our apps released only last December we have already reached 600K installs in Japan and iOS alone — this is very big in Japan, a key/huge English learning market.”

“To give you a sense for the magnitude of the industry, at any given time there are ~1.1 million people in Japan who go to English Conversation Schools (Eikaiwa), spending an average of between $150-$200/month,” he adds.

OKPanda’s business model aims to undercut that average, with a monthly subscription — of between $30 and $100 — for which the learner will get access to all its digital services and varying levels of access to the live, human instruction.

Beyond cost, Gries argues OKPanda is unique in offering a combination of self-learning features, including speech recognition tech, coupled with live human instruction. It currently uses Asian messaging app Line to deliver the real-time English instruction —  from Filipino teachers — via instant messaging. But is also planning to expand to add a live video conversation option soon. 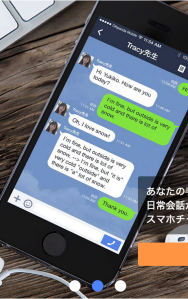 “In our system users can use the same app/s to practice English throughout the day on their own and at any point they feel ready, they can hop into a live instant messaging or (soon) video conversation with a live teacher. Tying the two together is critical because it allows the teacher to reinforce the exact items the student has been focused on and/or is struggling with,” says Gries.

“Also, it creates a human connection that many users seek and which helps them stick to their learning goals. Finally, all of the experts we have consulted with agree that live human interaction is key to to reach language fluency.”

The startup pegs the overall market size for learning English in Japan at $6bn to $8bn per year — but it also sees scope to expand its service to other key English markets in Asia in time, with China, Korea and Taiwan in its sights.