It was bad enough that LinkedIn bought the incredibly useful Gmail widget maker Rapportive, which offers a lightweight CRM tool that shows your contacts’ social accounts and recent updates, then proceeded to rip out the functionality that made the thing popular in the first place. But now, they’ve somehow managed to make the widget even worse. As in, it doesn’t even work anymore.

If you’ve still been clinging to Rapportive with quiet desperation and a sliver of hope that this thing won’t go the way of CardMunch, then you know what I mean. The add-on, which was recently updated to only support LinkedIn authentications, now can’t even retain your logged-in state. And I don’t just mean in between individual Gmail sessions where you’re closing your tab or browser and then re-opening it at some later point. I mean while you’re actually in your inbox, actively browsing your email. 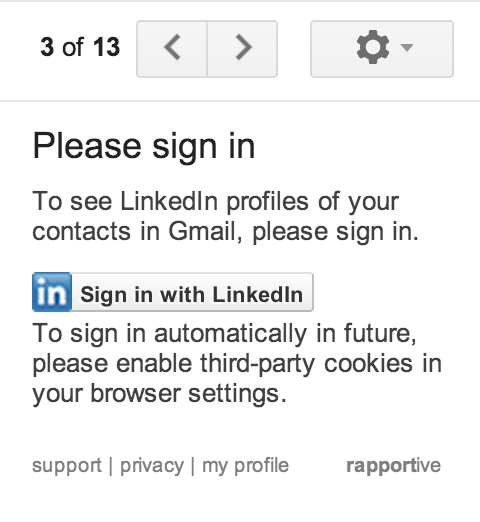 LinkedIn says the team is aware of the issue and is actively working on it. But this seems to have been a problem for some time – tweeted complaints date back to August 6th. And there’s apparently no ETA to a fix at this point.

why does @rapportive keep logging me out of linkedin? it seems every time i open a new email i have to re-login…

However, just because Rapportive has been effectively killed off, that doesn’t mean you have to give up entirely. As it turns out, there are several Rapportive alternatives already out there, including a similarly named (watch out, guys) Chrome extension called Rapporto, Ark’s browser plugin, Vibe, Connect6, and others.

None of these are quite as polished as the old Rapportive, or offer the exact same interface or functionality. The plugins are better at aggregating a user’s social profiles, not offering one-click-to-connect buttons like Rapportive once did. And in the case of Rapporto, it’s riding the Rapportive API so it’s only a temporary solution – LinkedIn will likely soon shut this down.

The Rapportive situation leaves room for another company to come in and make a landgrab for these disenchanted users. (And soon, please).

Because people are leaving in droves.

[<a href=”//storify.com/sarahintampa/rapportive-is-broken“>View the story “Rapportive is broken” on Storify]
UPDATE: Monday, 8/18/14, 5:30 PM ET: After days (weeks?) of brokenness, LinkedIn is reporting the issue has been resolved.