As you might have heard, Samsung loosened up the purse strings yesterday with a ~$200 million acquisition of SmartThings, a platform that sells starter kits for entirely personalized smart home customization.

For a few hundred dollars, SmartThings can help pretty much anyone get started building out a smart, connected home, with more than 100,000 different devices (from light switches to door locks to water sensors) and 8,000 different developer apps integrated with the platform.

SmartThings is open, asking developers and makers from all walks to build for the platform. Pairing that with Samsung’s variety of consumer electronics appliances and a massive distribution network takes SmartThings straight from the minors to the big leagues, so we took the opportunity chat with SmartThings CEO Alex Hawkinson about the merger:

TechCrunch: Why did you sell?

Alex Hawkinson: In a word, scale. From the very beginning there has been a sense that the internet of things has an opportunity to touch every human being on the planet. Our vision is to make every home a smart home, but we’re only two years and three months old, so we’re only getting started.

We’ve always taken the approach of being easy and open and we’ve been rewarded for that by our community. We have the best metrics of any smart home platform in terms of engagement. Samsung has a completely shared vision about the smart home, and we were able to talk about staying independent while still leveraging parts of Samsung to take this to hundreds of millions of consumers across the world.

I mean, Samsung is the biggest consumer electronics company in the world, across mobile and appliances, selling products in 200 different countries. They can quickly make SmartThings the biggest open platform in the world.

TC: So what will change? Who will lead the company, how many people are staying on, and where will you be working from, etc.?

AH: Everybody is staying on.

We’ve been in Washington D.C. with a developer center in Minneapolis. We recently opened a West Coast office in Palo Alto and we’re moving the headquarters there. As you know, it’s the core of the tech universe, so we had already made that decision independently of the deal with Samsung, but it was part of the financial enabler that allows us to quickly move the core team there.

Legally ,we are literally an independent entity. We’re keeping the SmartThings brand, and I will be CEO. We’re taking over our own building in Palo Alto, and we have our own business model. Through the division of Samsung that we’re in, the Open Innovation Center led by David Eun, will give us access where and when we want to partner with Samsung.

Samsung has all of the same tools as any of our developers, but obviously there is a mutual motivation to drive deeper integrations with mobile and appliances from Samsung.

Nothing changes for our consumers, either. If there’s any concern over Apple, we’re massive Apple fans over here and we will demonstrate that through proof of execution. But we’re very excited about hyper-location awareness and iBeacons and HomeKit. There is so much more to be done there, as well as the innovation that is happening in other places.

We’ve always been a champion of being open, and we have a robust developer platform in the space, so we will continue to build that up. That is the focus.

TC: What does the next year look like for SmartThings as a platform?

AH: It’s all about penetration. We’re still in the early stages, but right now it only costs a couple hundred dollars and fiften minutes to connect a home. It gives our customers more security and peace of mind to have a connection to their home. Even though it doesn’t sound sexy, the next year is just about distribution to reach a very big base of consumers with Samsung. What started as a handful of connected households across the country will become tens of thousands in the next 18 months.

Beyond distribution, we’re also looking to go deeper with our devices. Right now we offer basic sensors for the most common things you want to control in your home like locks and lights and thermostats, but in the next few months we’ll move more deeply into the home. We’ll get into core appliances and look at things like ambient awareness for voice, etc.

TC: It’s fair to say that the Google/Nest merger represents some of your biggest competition. In what ways are SmartThings and Samsung ready to tackle that competition as the space heats up?

AH:There is a lot of room to compete in this space. I mean, I’m not building a thermostat. I’m a huge fan of what Nest has built, and we fully embrace anything with an open API. Our community depends on that.

Obviously, we’re all looking to be the platform with the deepest data so that we can offer the richest experience for consumers, and there are only a few that have the resources to go after that quickly.

There’s a long future ahead. We have our own plans and we’ll see what emerges from others.

TC: What is the greatest challenge ahead?

AH: Matching the scale of distribution with the scale of opportunity. We solve for universal problems. I like to say internally that everybody’s got a front door. The biggest challenge for whomever is going to be the leader in this space right now is how to scale large enough for all the users you could reach at this very moment. How fast can we grow to worldwide distribution.

TC: But even with the distribution of Samsung, isn’t the barrier to entry a bit higher than just the SmartThings platform itself? You need other, sometimes expensive, devices to connect to, as well.

AH: Well, the beauty of our platform is that not one size fits all. If what matters to you is flood protection you can get just that, or automated lighting, or health integration in your living environment. Due to the nature of the open platform, we have rich answers for consumers in all these different pockets.

We offer robust device support, but the consumer can do everything on their own terms, and then buy devices or apps as they see fit. We’re very non-threatening in that respect, which is why we have some of the best metrics of any smart home platform. On average, our consumers start with about five devices connected, and the average household normally has more than ten devices on the platform.

TC: What did you do first when the deal was over?

AH: The first thing I did after the papers were signed and the deal was closed was…high fives all around and had champagne and strawberry cake with the team. Strawberry was the code name before the deal was finalized. 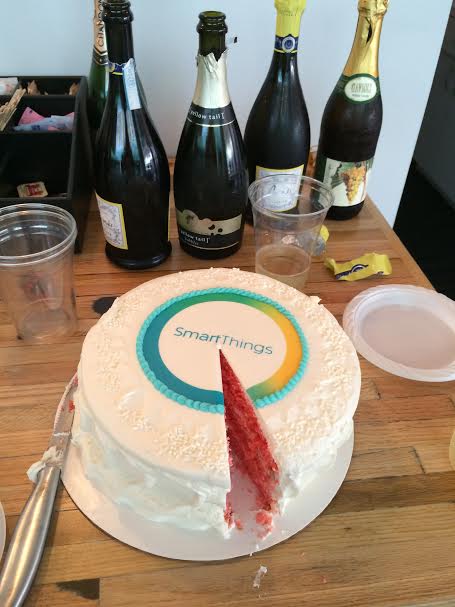