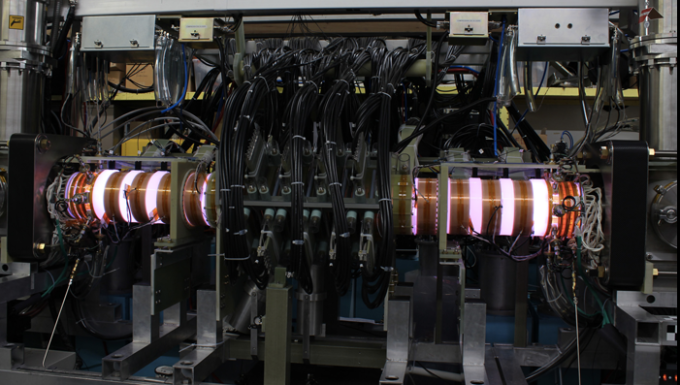 Building a nuclear fusion reactor that can generate more energy than is put in to make it work is one of the biggest challenges facing engineers today. Like quantum computing, decades of research have mostly resulted in proofs of concept, not hardware that can be rolled out commercially.

So it came as a surprise to hear that Y Combinator and Mithril Capital Management are investing $1.5 million in Helion Energy, a Redmond, Washingon-based startup that says it has a plan to build a fusion reactor that breaks even on energy input and output, a challenge whose solution has been considered decades away for, well, decades. Helion CEO David Kirtley says that his company can do it in three years.

Helion was founded by four scientists working at MSNW, an organization spun-off from the University of Washington that focuses on determining the feasibility of turning plasma physics research into commercializable hardware with aerospace and power-generation applications.

When the team left to form their own company, they did so with the express intention of using electronics advancements from other fields to create a magnetic-inertial confinement fusion reactor.

That was one of the big reasons Mithril took an interest in Helion when first introduced early this year. “The founding team has spent ten years working on the problem. Between 2003 and 2009 they found many solutions that don’t work, many paths not to take,” Mithril managing general partner Ajay Royan told me on a phone call.

The team saw that the technology being built for space propulsion and the smart grid could be used to control a magnetic field that contains plasma undergoing nuclear fusion — and even “squeeze” the plasma to increase the rate of reaction. 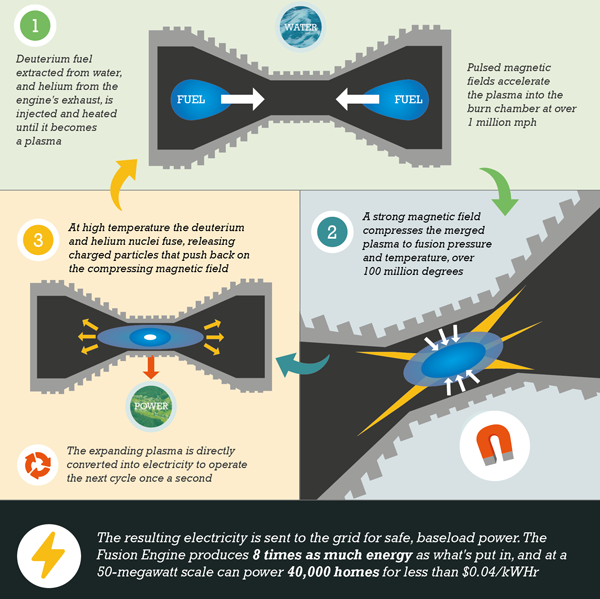 Unlike ITER, the international effort to build the world’s largest experimental fusion reactor, Helion isn’t aiming at designing a full-scale power station. That comes with several advantages, the biggest being that they don’t think it will cost them anywhere near $50 billion to construct a reactor that achieves break-even, and full-scale plasma experiments will begin well before ITER’s new goal of 2027. Kirtly says that they estimate that reaching break-even with their design should require “just a few tens of millions of dollars.”

Instead of building at the scale of a gigawatt power station right out of the gate, the company is looking to compete with smaller, more distributed plants, like large diesel generators in regions where fuel has to be trucked in. It’s a market where the current “best” solution isn’t great and the barriers to entry are far easier to deal with than when competing with the big guys.

At the scale they’re designing for, the team thinks that it will have significant price advantages once they go to market. Their design collects charged particles with each pulse, meaning it can generate electricity without having to construct a pricey turbine in addition to the reactor. The reactor is fueled by deuterium, an isotope of hydrogen that is abundant in sea water, making it more affordable than truckloads of diesel.

In an ideal world, everything works out for Helion over the next few years. They achieve break-even, raise an Uber-like mountain of capital in a Series C to begin building factories, and begin cranking out reactors that provide reliable, emissions-free energy without any nuclear waste to dispose of. As they transition from providing a niche product for remote regions to massive power stations, the idea that we had to burn fossil fuels to sustain our way of life begins to seem quaint. Hurrah for humanity.

That long-term dream is what motivated Y Combinator president Sam Altman to begin looking for opportunities in nuclear fission and fusion one and a half years ago. “Any time you can come up with a new, cheaper source of energy, it has a huge impact on quality of life for everyone,” Altman told me earlier this week. “Clean, safe, renewable energy is the best thing you can do for the poorest half of the world.”

With all of that said, three years is a long time. All kinds of companies run in to roadblocks that lead to failure over that kind of time frame, and most of those companies aren’t building technologies on the bleeding edge of plasma physics.

Things could go according to plan for Helion. Or, it could turn out that some key ingredient to building a reactor that actually generates more power than put in is trickier than originally predicted and the company has to put another $100 million into R&D.

According to Mithril’s Royan, the partnership between Mithril and Y Combinator is intended to help Helion become a company that can survive difficulties that arise over the years to come. Mithril, which contributed “well over $1 million” to Helion’s Series A, “looks to invest in durable companies.” In my conversations with Kirtly, Altman, and Royan, each emphasized how important being part of the current YC batch is for instilling a culture that can make significant progress while being prepared to solve problems that emerge along the way.

During a period where it seems like the hottest thing is Uber for Whatever, it’s cool to see investors throw millions at companies looking to solve big issues. While it’ll probably be a few decades late (2015 is right around the corner), any push forward on nuclear fusion brings us a bit closer to this: