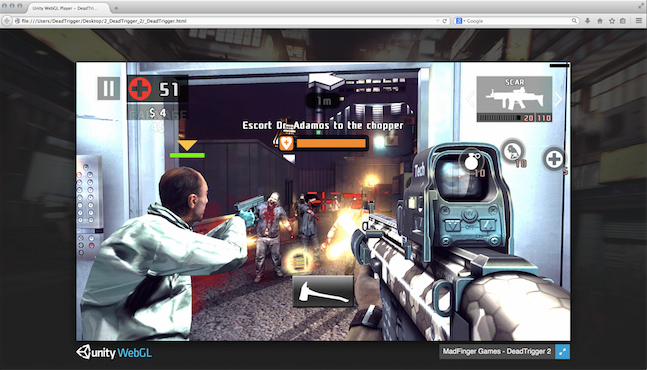 Back in March, Unity announced that they’d soon allow developers to deploy Unity-based games to the web without the need for any plugins, thanks to the magic of WebGL.

Unity’s WebGL announcement was pretty light on details — but with the company’s annual Unite conference coming up next week, more details are starting to trickle out.

Namely, Unity’s WebGL deployment support will be free of charge for both free and Pro users. You’ll be able to build a game in Unity’s engine and push it to the web without paying them a dime.

Wondering what the heck a WebGL is? The short, oversimplified version: WebGL is a tool that lets web developers tap the power of your computer’s graphics card to render 3D games and applications right in the browser without requiring you to download anything. It’s been around in early forms since 2011, but has really only started finding its way into browsers in the last year or so.

Unity games have worked in the browser for ages now — but thus far, they’ve required a hefty plug-in download. It’s 2014. Getting users to download plug-ins is hard.

(As for how the heck Unity makes money if they give the engine away for free… Three ways: Premium licenses for advanced users, partnerships with the Microsofts/Sonys of the world, and agreements that the product is only “free” until you make $100,000 or more per year with it.)