A new app called Spiral could change the way we connect with the people and places around us. The idea is pretty straightforward: users see a news feed of posts near them, and can add their own updates and comment on other people’s posts. Users can adjust their geographic filters to see posts from a larger or smaller radius.

Spiral was founded by Gerry Giacoman Colyer, Jorge Pozas, Michael Ma and Daniel Shteremberg. The team has an impressive mix of backgrounds, from engineering and product experience at Microsoft, Apple and Google, to studying at Stanford and Harvard business schools.

Colyer and Ma came up with the idea when they were at Coachella this spring and noticed that the festival’s tight-knit community could be replicated elsewhere and enhanced by technology. Spiral’s logo features a ferris wheel, which Colyer says symbolizes the use of the ferris wheel as both a gathering point at music festivals and cities, and as a vantage point from the very top to get a sense of what’s happening around you.

“We see ourselves as a Reddit-style community for local chatter, with proximity as the guiding principle,” Colyer says. 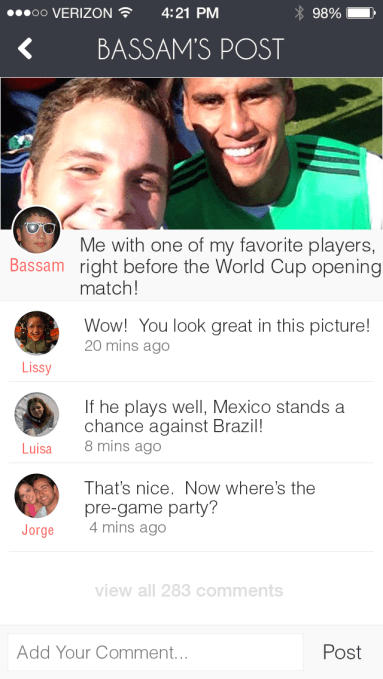 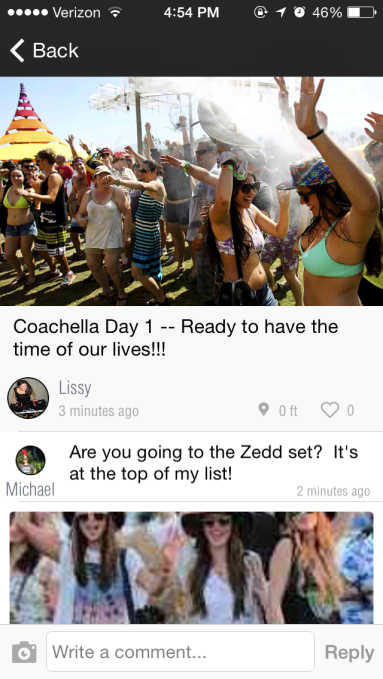 Spiral is playing in an interesting space right now, giving it both a great opportunity and fierce competition.

Spiral recently launched an Incognito feature that lets people post anonymously, and the team is going to be adding college-centered communities within the app in the near future as students return to classes. These moves bring Spiral into competition with Yik Yak, Secret and Whisper, among others; the simple location aspect will pit Spiral against everyone from Facebook to Snapchat to Foursquare’s new Swarm app.

“We want to become the pulse of location,” Colyer says. “So whenever you’re moving around, and especially if you’re at an event and want to get a sense of what’s happening around you…this is where you would go.”

The team has taken a small $47,000 grant from Lightspeed Ventures thus far, and Colyer says they will look to raise more money later this year.

You can download Spiral now on iOS and Android.

Disclosure:  I have accepted a role at Khosla Ventures beginning in September. Since accepting this job, I am not covering any of the firm’s portfolio companies.