Over the last few years, technology has steadily worked its way into the concert-going experience. Apps make the ticket purchasing experience a simple affair, while the endless flood of social data gives promoters and bands the ability to target their marketing efforts at those most likely to enjoy their particular style.

Y Combinator batch company TicketLabs wants to make that technology affordable and accessible for smaller artists and venues. So far, most of these improvements have gone to the high end of the market — companies like Ticketmaster were able to use its lock on the space to invest in improving the experience while collecting social data through social check-ins.

According to TicketLabs CEO Ian Roberts, the company put down its first lines of code on January 1 and brought in its first revenue on January 16. From there, the company expanded with the help of promoters in the Toronto area. By building for smaller players, it became obvious how to expand their product.

Unlike arenas filled by legions of Kanye and One Direction fans, smaller venues often have trouble selling out. TicketLabs’ approach to the problem is to make it as easy as possible to turn a band or venue’s social presence into a channel for selling more tickets.

Its tool for creating event pages needs just one photo to generate a page with matching accent colors. With a few more links, you can connect it to a Facebook event and bring in relevant videos from YouTube. All told, Roberts says the process only takes about five minutes.

As with Eventbrite, people can share a link to this page to quickly get the word out about an event. So far, 70 percent of users who buy tickets through these pages sign in using their Facebook accounts during the process, making it more likely that they’ll help to promote the event from their account and give TicketLabs data that it can package for its customers, like where fans live and which artists share fans.

TicketLabs also simplifies how things work once the night of the concert arrives. Instead of requiring a standalone hardware scanner that ties into the ticketing backend, concert venues can scan tickets with an app for iOS or Android. 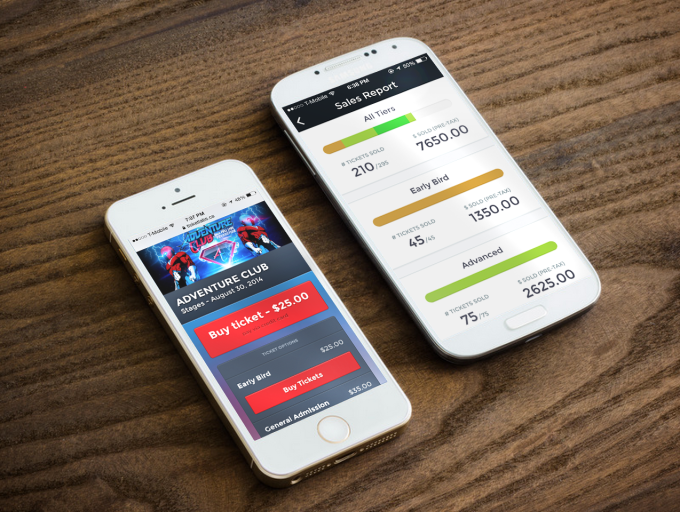 Most of TicketLabs’ traction has come from the electronic music scene. The demographics line up well with what tech startups look for in a user base: EDM fans are generally young, tech-savvy early adopters enthusiastic about finding niche events to attend with their friends. It’s an audience that gets excited about spending money together. So far, the duo has processed almost $500,000 in ticket sales from more than 50 events, with an average audience of 750 people.

While TicketLabs’ service appeals to those who aren’t afraid of tech, the team has collected some surprising findings so far. For instance, approximately half of its users still print out their tickets, while roughly a third actually buy their tickets on mobile. While neither of those is necessarily a bad thing, Ticket Labs is looking for ways to increase utilization of e-ticketing and the number of purchases happening when people are on the go.

My free suggestion: give concert goers a native app rather than require them to bounce over to Mobile Safari or Chrome when they click on the link to buy tickets on a Facebook event page. While it may not affect the actual user experience all that much, services like Uber have trained us to expect a fast app with a big SPEND MONEY button front-and-center.

For now, marginally improving their mobile experience isn’t TicketLabs’ biggest priority — getting new clients is. That’s easier said than done: The company’s two founders are still doing all the work, with Roberts spending his days reaching out to venues, promoters and artist management to find new prospects while co-founder Patrick Hannigan focuses on the tech side of things.